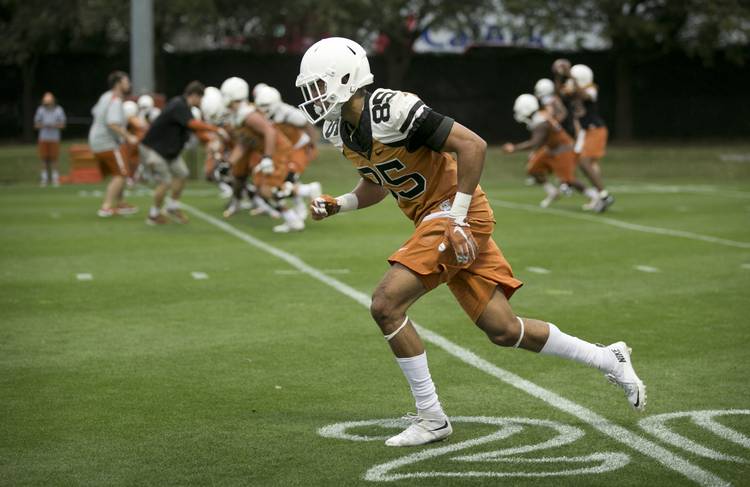 -As expected, quarterback Tyrone Swoopes got reps with the first-team offense followed by Jerrod Heard (second) and Shane Buechele (third). Redshirt freshmen Kai Locksley and Matthew Merrick did not get snaps during team drills. Hard to take away much from a practice in shorts, but Swoopes looked to have had the best day throwing. Heard made a bad decision throwing late into coverage and was nearly picked off in the flat by Cameron Townsend.

-Sterlin Gilbert’s uptempo offense is just that — uptempo. After every snap, the ball is advanced five yards and within a couple of seconds it’s snapped again. Very high paced. Players definitely took advantage of their water breaks.

-The play of the day belonged to Dylan Haines, who jumped up and came down with a one-handed interception. Absolutely splendid. Haines has had his share of gimme interceptions the past two seasons, but he had to really work for this one.

-True freshman Collin Johnson might be the best receiver on the roster. The early-enrollee from San Jose is well put together at 6-6, 212 pounds and the rotator cuff he tore in his senior season of high school did not prevent him from showing up to Texas with bulging biceps. In team drills, Johnson beat Holton Hill deep (incomplete) and Davante Davis on a slant (complete). Later, he shrugged Hill to the ground and made a wonderful one-handed catch out of bounds on a deep ball. After one practice, Johnson looks like a star.

-Observations on physiques: Shane Buechele is short and thin. P.J. Locke’s chest has gotten big, as have Jerrod Heard’s arms. DeAndre McNeal looks to have slimmed down, but he struggled with drops. Chris Warren, at 255 pounds, is huge.

-Early-enrollee Zach Shackelford worked with the first-team at center, as did Terrell Cuney at left guard.