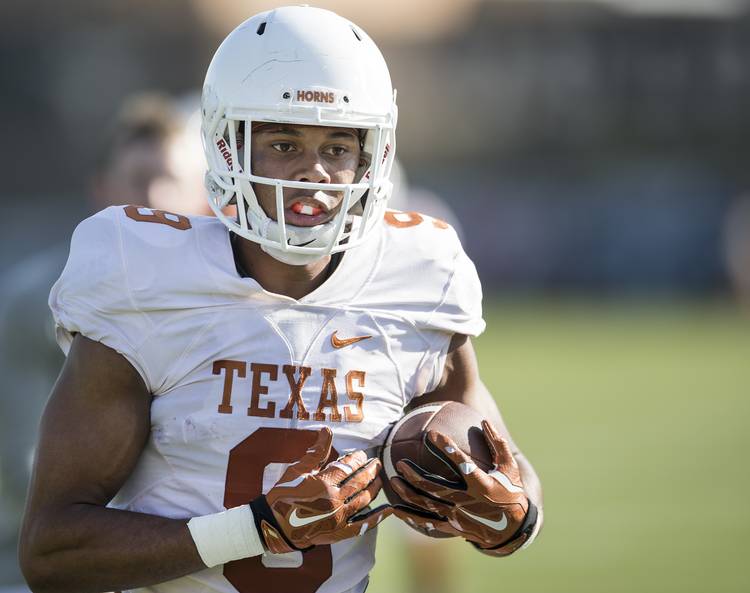 Texas Longhorns Collin Johnson pulls the ball in for a catch during spring practice Tuesday, March 21, 2016. RICARDO B. BRAZZIELL/AMERICAN-STATESMAN

Kirk Bohls released this week’s nine things and one crazy prediction. A couple were dedicated to the Longhorns. Here’s Kirk’s take on those items:

I’m totally in favor of the early, 72-hour signing period for college football recruits that’s proposed for the third Wednesday in December, in idea the NCAA Division I Council approved last week and one the Collegiate Commissioners Association will consider in June. The FBS members of the council voted 14-1 in favor of the proposal. I prefer an even earlier date in August to avoid the outlandish costs of having to continue to recruit players who would rather sign as early as possible. Nothing forces any of these players to sign early, but anything that diminishes the costs and manpower hours devoted to recruiting and re-focuses more of the same on these coaches’ current players is a good thing. As for the move to ban college programs from hiring high school coaches with plum players to avoid the obvious conflict, that idea embraces a very scurrilous argument. Why punish high school coaches who want to get ahead and who prove their worth by helping to develop highly desired recruits. That sounds un-American. I can understand coaches wanting a 10th full-time assistant. Doesn’t every staff need a pee coach? Herman certainly does.

Interesting that Charlie Strong has opened his spring football practices at South Florida to the media. He told a Tampa columnist the reason he didn’t do so in Austin was “too many cameras. Austin, it was too much. I couldn’t do it in Austin because everybody would have critiqued every player on every play (and say things like) ‘This guy is no good.’ ” Strong noted he’s now starving for attention in Tampa, where he held his team’s spring game at the school’s soccer stadium. … Former Longhorns defensive coordinator Vance Bedford tells me he is “semi-retired.” He said he is possibly “looking at the NFL, but I have been out for 12 years.”

For the rest of Kirk’s 9 Things, including more thoughts on the Orange-White game, Phil Jackson and new baseball rules, click here.