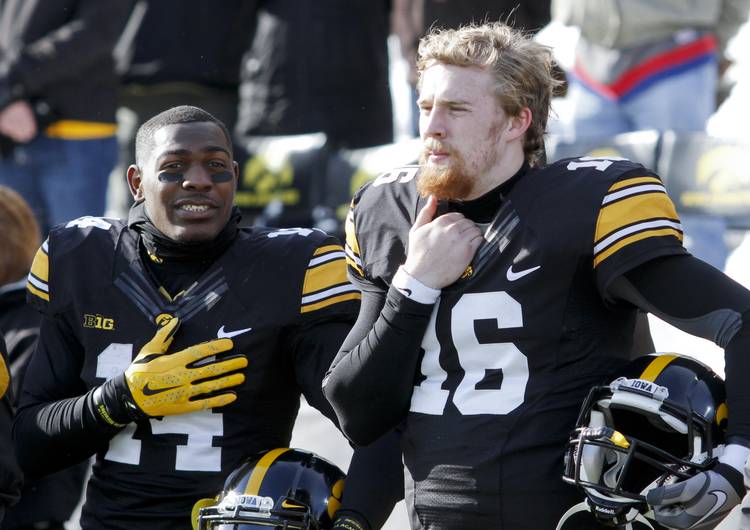 IOWA CITY, IA - NOVEMBER 21: Defensive back Desmond King #14 and quarterback C.J. Beathard #16 of the Iowa Hawkeyes stand before the match-up against the Purdue Boilermakers on November 21, 2015 at Kinnick Stadium, in Iowa City, Iowa. (Photo by Matthew Holst/Getty Images)

The former Texas OC, who tutored Vince Young and Colt McCoy with the Longhorns, raised a lot of eyebrows when he said this the other day about Hawkeyes senior C.J. Beathard:

“I think he has a chance to be the best I’ve ever coached,” Davis said on KxNO’s “Hawk Central” program. “He’s got a wonderful feel for the game. We give him a lot of flexibility. He’s fixing to get a lot more flexibility because we feel like he’s ready to handle that and do a lot more at the line of scrimmage.”

Beathard is coming off a nice season. He threw for 2,809 yards and 17 touchdowns and rushed for 237 yards and six TDs.

Davis said there is a big asterisk with Beathard’s more modest numbers. He played hurt most of the year, battling hip and groin injuries and needing offseason sports hernia surgery.

Beathard was so banged up that some weeks he was unable to practice more than once. Davis said Beathard’s injuries altered many game plans and often took away the scrambling element and the deep ball.

A healthy Beathard could make a lot of difference.

“We want to be smart. But at the same time, football’s a collision sport, it’s a violent sport,” Davis said. “I think you can be smart about the number of times you ask him to carry the ball.”

Davis said Beathard, a one-time three-star recruit from Franklin, Tenn., has the tools to be much more dangerous this season, both throwing and running. There’s one thing Beathard needs to change before opening kickoff, Davis joked.

“He’s got to learn to slide better. He is the worst slider in the history of quarterbacks,” Davis said. “I’m thinking about some day during fall camp going out to the baseball field and trying to teach him how to slide feet-first.”