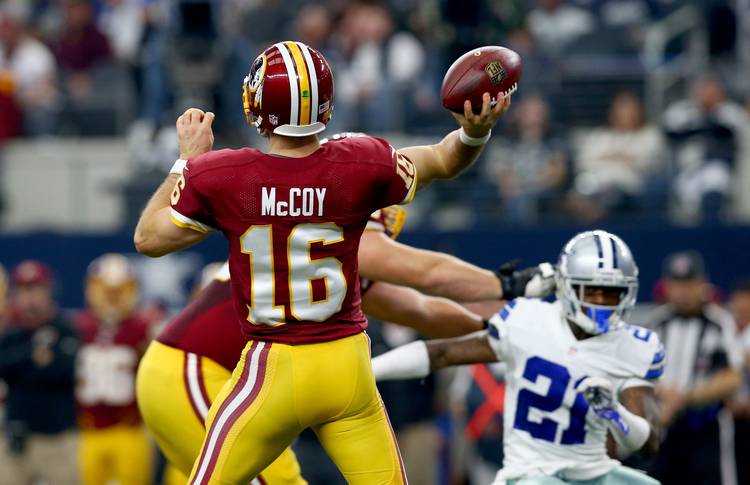 Texas football legend Colt McCoy signed a one-year extension with the Washington Redskins, likely keeping the quarterback with the team through 2019.

Ian Rapoport of the NFL Network and NFL.com reported the signing Thursday on Twitter.

This extension can become no extension at all if it makes sense for McCoy. If he does hit the void criteria, depending on other factors, the Skins can buyback for 6 different amounts based on playing time percentage and performance. https://t.co/GJgK8FTwIn

The deal is worth up to $7 million and is one which may allow McCoy to leave for a better job elsewhere after the 2018 season.

Washington added Alex Smith to be their starter, opting not to elevate McCoy to the role when Kirk Cousins left for Minnesota. Should McCoy find his way onto the field this season and perform well, he could void the contract and look for a better situation.

The former Longhorn hasn’t had many great moments in the NFL, carrying a 7-18 career record. He has 5,586 passing yards and 26 touchdowns and hasn’t attempted a pass in two seasons.

McCoy was drafted by the Cleveland Browns and started eight games in the 2010 season. He started 13 games the next year and went 4-9 with a career-best 14 touchdown passes.

At Texas McCoy went 45-8, earning the most wins in NCAA history at the time. He holds the record for highest completion percentage (76.7 in 2008) in a season in the Football Bowl Subdivision.

The Longhorn legend is entering his fifth year with Washington.