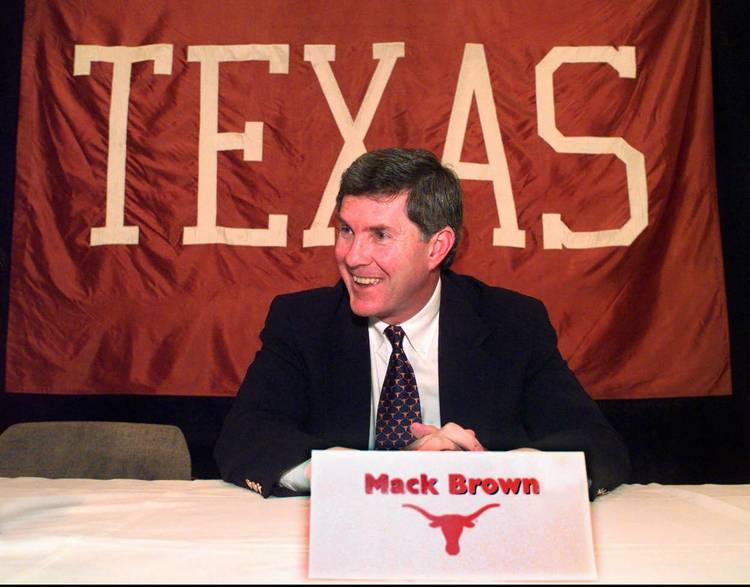 Signing day for recruits is a month away, but Texas’ Mack Brown is already turning heads and changing minds.

Texas City’s lightning bolt of a linebacker, Everick Rawls, was all but a Texas A&M Aggie and wasn’t even considering the Longhorns but now is leaning toward UT, says Bobby Burton of the National Recruiting Advisor. Skyline’s flashy receiver Montrell Flowers was barely looking at the Longhorns but now has them on a list with Colorado and Kansas State.

“It’s such a drastic difference from before,” Burton says. “With John Mackovic, recruiting was not his strong point. Recruiting is Mack Brown’s strong point.”

*Running back Ricky Williams changes his mind with the hour about turning pro or staying for his senior season. Insiders suggest he is looking for reasons to stay and could be swayed to return if he thinks UT has a legitimate chance to win next fall.

It does, Ricky. With the offensive line almost intact, UT could sweep all six home games against New Mexico State, Rice, Oklahoma State, Iowa State, Baylor and, yes, Texas A&M and beat Oklahoma and Texas Tech on the road to go 8-3 and play in a bowl game. Plus, you could win the Heisman and decline an invitation to New York City after this year’s snub.

Washington State quarterback Ryan Leaf advised Williams to take the money and run to the NFL. Best bet is Williams is leaning 60-40 in favor of the NFL.

*Former UT golf coach Jimmy Clayton is optimistic about finding a private company interested in building a $10 million golf course to serve as the home of the Texas men’s and women’s teams. South Carolina has such an arrangement. Properties in Northwest Hills, South and East Austin have been identified as ideal sites for an estimated 200 acres to build 18 to 36 holes with a practice area. Clayton hopes to announce something in the next two months and would like to add a UT Golf Hall of Fame to the premises.

*Since missing two free throws against North Texas, UT’s Brandy Perryman has hit 23 straight. He has sunk 49 of 54 technical free throws and is a perfect 22 of 22 on the road.

*Sorry, but isn’t Chiefs Coach Marty Schottenheimer the R.C. Slocum of the NFL? Loves to run the ball, defensive-minded and almost unbeatable in the regular season. But, oh those Januaries.

*Oklahoma’s John Blake is telling Beaumont Westbrook quarterback Chip Ambres the Sooners are switching to the option and want to build around him. Ambres is also looking hard at A&M.

*Longhorns quarterback James Brown might be invited to the combine in Indianapolis next month after his bang-up performance in the Blue-Gray Game. If not, it’s hello, CFL.

*UT is not among Baseball America’s Top 25 teams and is picked last in the Big 12 South. Look for a possible all-freshman infield of Mike Kolbach at first base, Tommy Nicholson at second, Jason Moore at short and either Jason Aspito or Yale transfer Brian Ivy at third.

*UT always gets a look for the Kickoff and Pigskin football classics. How’s a Texas-North Carolina game sound? Be a sellout in 10 minutes.

*Applause for 324-game winner Don Sutton’s election to Baseball’s Hall of Fame. He won 71 more games than Hall of Famer Carl Hubbell. Don’t understand the knock on Sutton because he stood for longevity. Excuse me, but wasn’t Cal Ripken Jr. celebrated from coast to coast basically for the same?

*Proposals to bid on the rights to become UT flagship radio station go out this week. Recent KVET/KASE sale for $90 million to CapStar, which owns about 400 stations nationwide, and purchase of five stations by KLBJ could push up the price.

KVET owned the rights for the last three years at more than $275,000 per a year, but sales tag should rise at least 30 percent. Bids are due Feb. 4. UT’s sale of marketing/promotion rights to Host USA/Fox for $8.5 million over five years marked an increase of 33 percent from previous deal.

*Already 28 of the new 52 east-side luxury boxes at Royal-Memorial Stadium –have been leased. Checks for 10 more are in the mail.