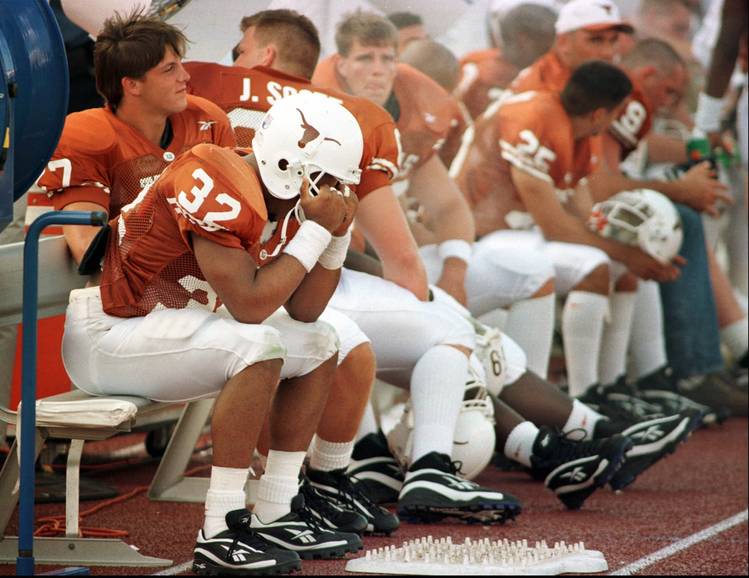 9/13/97 Staff Photo:Sung Park....Jeffrey Clayton, RB #32 of UT sits on the bench near the end of the game as they trail 66 to 3 against UCLA at Royal Memorial Stadium.

At least the band kept playing.

It was hard to determine whether the Texas football team did. Oh, the Longhorns were out there all right, or some unreasonable facsimile of the Longhorns. But they seemed to be going through the motions. Backward motions, at that.

Did the team quit? Doesn’t it have to start first?

A 66-3 whipping by UCLA easily qualified as one of the most obscene performances by a Texas team in its 105-year history and maybe the worst loss ever by a Top 25 team against an unranked opponent.

This has been happening far too frequently. The lingering question on the minds of Longhorn fans, most of whom did not linger at Royal-Memorial Stadium for very long, was how?

How could a football team that considered itself a dark-horse national championship contender be saddled with such a beating and put on such a pitiful performance? How can a coach who’s paid so handsomely to resurrect Texas football, and who thinks he could teach Steve Spurrier a thing or two, fail to motivate his team for a nationally televised game against a marquee name? How can a team ranked 11th nationally play like a team ranked 111th?

“Losing always baffles me, ” Texas Coach John Mackovic said. “We can stick this one in the trash can. This was a real butt-kicking. I don’t think we ever raised our level of play. We played at the same level all day.”

Mackovic said he sensed his team was “pretty loose” Friday, dangerously loose, but he felt helpless about erasing that mentality. That, however, is part of his job.

“I don’t think that’s a problem, ” said kicker Phil Dawson, who was the Texas offense Saturday. “If it takes a screaming coach throwing his hat around to get you to play for the University of Texas, you don’t need to be here. Coach Mackovic motivates you in a different way. He appeals to your mind.”

Cerebral approaches are keen for strategically crafting a game plan, but football is an emotional game played by salivating players bent on destruction. As Texas linebacker Aaron Humphrey said, “I wanted to totally destroy UCLA, but they came out and destroyed us.”

This was billed as an offensive shootout, but it was UCLA doing all the shooting. Texas was not even competitive. Fans left the stadium in droves midway through the second quarter, overcome by the stench. When the Longhorns finally forced UCLA to punt on its seventh possession, what was hardly a quorum in the stands offered sarcastic cheers.

An opposing quarterback who was described by his coach as “a linebacker playing quarterback” set a UCLA school record with five touchdown passes against a defense that tackled like a bunch of quarterbacks.

Maybe instead of how, we should ask, “Why again?”

This type of lifeless performance is happening with far too much regularity. Under Mackovic, the Longhorns are a disheartening 10-10-3 in nonconference games. Even worse, against intersectional opponents ranked in the Top 25 — not counting UCLA, which should be — Mackovic’s teams are 3-9-2. Their average margin of defeat approaches 18 points a game.

Here are some possible explanations.

Mackovic must be able to rally his players, if not from the outset, then after the opening whistle. That was never apparent Saturday. Texas was either never ready to play or quickly became that way at the first hint of trouble.

As mentioned many times here, he is a brilliant offensive thinker, as good as any in the game, but there are obvious deficiencies in his coaching style that he desperately needs to address. There is never a sense of urgency with the 53-year-old coach. If he’s to earn $150,000 bonuses for winning the Big 12, might he offer a rebate for stinkers like this?

Mackovic is forever preaching about the journey and not the destination. Saturday, unfortunately, looked like a trip down memory lane. This looked too much like the 1995 blowout at South Bend, the 1993 runaway near Churchill Downs and last year’s white-flag surrender at Virginia. I expecteda 10-1 year but figured on Texas A&M as the lone loss.

Where was the leadership from six senior starters? Certainly, they share in the culpability.

“There are two kinds of teams — teams that are good and teams that think they are good, ” said senior center Ryan Fiebiger, who faulted the offensive line’s inept performance. “I want us to turn into one that is good.”

The defense again looked its dreadful self. What with missed tackles and blown assignments, Mackovic’s move to promote Bobby Jack Wright to defensive coordinator instead of doing another of the school’s nationwide searches was risky, as written here in January. It remains a gamble, although no one should render a verdict on Wright after two games.

Nine games remain in an already tattered season, more than enough time to make repairs for a great year. The Longhorns should hope thatwhat needs correcting is a return to the fundamentals of tackling, catching and blocking and not a fundamental problem at the core.

Sept. 13 will go down as one of the darkest days in Texas history.

FROM THE ARCHIVES (Jan. 7, 1998): UT’s Brown has recruits changing their field