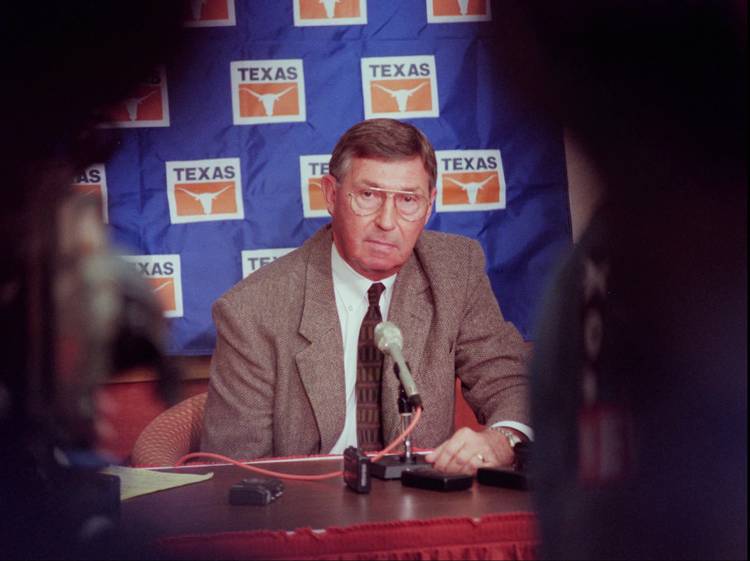 Tom Lankes/AAS - 11/29/97 - DeLoss Dodds, University of Texas Athletic Director, answers questions after his announcement of the reassignment of John Mackovic.

The search for a new University of Texas football coach begins today. It could end by Friday if you-know-who says yes.

Athletic Director DeLoss Dodds said he doesn’t need any outside help in hiring a successor to John Mackovic, but just in case, the area code for Evanston, Ill., is 847.

You-know-who is the coach who kicked the you-know-what out of the Big Ten the two seasons before this one, which is exactly why Northwestern’s Gary Barnett probably should be the next coach at you-know-where.

Dodds is in the process of forming a search committee, although the search might already have begun through regents Tom Hicks and Don Evans. Dodds said no candidate had been contacted and he could quickly pare down his own list of 30 to eight or three.

Here’s an even shorter list: Gary Barnett and everybody else. Texas will interview multiple candidates, Dodds insists, but at this point it appears that Barnett might be Candidate 1 and all the others are 1A.

Texas doesn’t want to screw this up and wisely will look in every locker room.

Lewis and Raye — a former Fred Akers assistant at Wyoming — are both African-Americans with excellent coaching credentials. But neither has been a head coach, and neither has worked on a college campus since 1982. “I think a fair amount of college coaching would be necessary, ” Dodds said.

Hiring either would strike at the heart of accusations of racism cast at the school for decades and, no doubt, would help Texas recruit against coaches like Bob Simmons and John Blake of the Big 12.

Texas’ choices shouldn’t be limited to Barnett, but he’s certainly a safe one. Consider this a strong but not unequivocal endorsement.

In a statement Saturday night, Barnett said he had not been contacted and “I am not pursuing any other jobs.”

Barnett declined jobs at Notre Dame, UCLA and Georgia and rebuffed interest from Oklahoma, Maryland and the Detroit Lions. He might not be the next Darrell Royal, but it’s with a good degree of confidence that I say he wouldn’t be the next John Mackovic. There are, however, some similarities.

He’s not the close-to-scratch golfer Mackovic is, but he loves to play the game and has a handicap around 8. He can be a control freak and, in fact, sent letters to the editors of the two Chicago dailies ripping them for their lack of coverage of the Wildcats’ spring practices. He can be hypersensitive to criticism.

But there are more reasons to hire him than not.

He’s won back-to-back Big Ten championships at a school known mostly for its acting alumni, which include Seinfeld’s JuliaLouis-Dreyfus. He wants to win a national championship and has a better chance here than there. He’s polished. He appreciates defense. And, best of all, he’s a great coach.

In truth, there are no guarantees that the 51-year-old coach who took Northwestern to the Rose Bowl for the first time in 46 years will be Texas’ next head coach. But he’s a good place to start.

Dodds good-naturedly warned reporters not to press too hard and risk “scaring off” any viable candidates. But that’s as good a test as any of their worthiness for the Texas job. If they can’t stand the heat, they might be better off staying in the snow.

That does bring up one other reservation about Barnett. As the head coach at Fort Lewis (Colo.) College and Northwestern, he has never coached in a fishbowl. Can he coach at a football hotbed under white-hot pressure? Can he handle the constant glare and the incessant scrutiny? Does he even want to?

If he does, Dodds’ best bet might be to hire Barnett by Friday and whisk him to San Antonio for a live interview at halftime of next Saturday’s Big 12 championship game.

By the time the second half starts, he can be on the road recruiting.