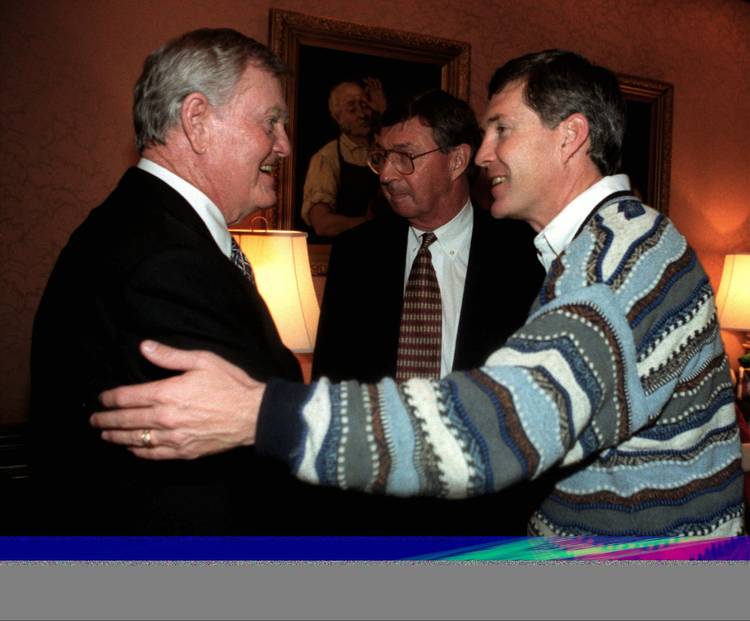 Question: How many Longhorns does it take to screw in a light bulb?

Answer: Six. One to actually do the work and five to say how Darrell Royal would have done it.

We may not have to imagine any longer how the legendary Texas football coach would have done as John Mackovic’s successor because, according to some on the 11-member search committee that helped select North Carolina’s Mack Brown, Texas has hired “Little Darrell.”

No one will say exactly who stuck the new head coach with the tag — a play on junior running back Ricky Williams’ nickname of “Little Earl.”

But it just might fit the 46-year-old Tennessean whose task it is to restore the luster to a program that hasn’t won a national championship since 1970. Who knows, Brown might be able to keep “Little Earl” from the NFL for a year and sign a whole bunch more just like him.

Brown has been a Royal friend for years and even had Royal and the athletic directors at Notre Dame and Michigan evaluate his program when Brown took over at Tulane before his Carolina days.

Asked what he liked about Brown, committee member Doug English said, “Name something.”

“There are maybe eight important qualities in being a killer coach like a Paterno or a Royal, ” said English, a former star Longhorn defensive tackle. “You hope you can get somebody with five or six of them, but I swear this guy (Brown) has all eight.”

When Brown met with the search committee, members said, he looked each of them in the eye and called them by name, just as Royal had done during his interview some 40 years before.Royal couldn’t be reached for comment Thursday, but it is obvious that he and everyone else on the committee were on the same page as Athletic Director DeLoss Dodds and regent Tom Hicks. For a time, however, it seemed the only guy who could fix this program wasn’t the next Royal, but the old Royal.

When asked Monday if he had been approached about coming back as head coach, Royal said with a smile, “No, dammit.”

He was kidding but added good-naturedly, “It would have been nice to be asked.”

That’s how Gary Barnett felt, too. But Texas never did ask the Northwestern coach to be the next Longhorn football coach. He thought Texas would ask, but the search party quickly came to a clear consensus that Brown was the No. 1 choice.

There’s nothing wrong with that. Either would make an excellent Texas coach, given his considerable coaching and recruiting skills.

But Brown is a great hire. Barnett might be more tough-minded than Brown, but the committee felt the gregarious Brown has a warmer personality and could better appeal to and unite the Texas alumni and former players.

Brown had an obvious edge on Barnett because the Tar Heels coach got audience with the entire screeningcommittee, something Barnett did not. Hiring Brown is no mistake, but not screeningBarnett more thoroughly before making a decision this big was.

Some have taken issue with the perception that Royal might have been unduly influential, but he was and is a strong factor in any such major decision. However, most parties insist Dodds and the powerful Hicks concluded that Brown would better serve Texas’ purposes long before the committee, including Royal, concurred in Atlanta.

“I told the committee every person has a flat side (weakness), ” Dodds said Thursday. “The way you get around that, you hire people to compensate for it. We had to find somebody who didn’t have a flat side. And that’s Mack Brown.”

The search ended almost as quickly as it began. Dodds flew to Chicago on Southwest Airlines, and Hicks came from Palm Beach on one of his four private planes. They interviewed Barnett in Chicago for four hours Tuesday night, and the coach even said he might hire Jim Wacker as his offensive coordinator. Dodds and Hicks came away less impressed than they had hoped.

They then flew to Atlanta on Hicks’ plane, arriving at 1:30 a.m. Wednesday. Later that morning, they had a session with Brown and his representative, former CFA executive director Chuck Neinas. Three hours later, they had their guy, but they waited to see if their guy wanted them.

The situation was so emotional for Brown — Brown’s wife, Sally, has lived in the Chapel Hill area for 17 years, Mack 10 years — that Dodds and Hicks decided not to fly to St. Louis with the committee for another interview with Barnett. Both Dodds and Hicks wanted to stick by Brown’s side in Atlanta to avoid his having a change of heart.

Several committee members wondered whether they should meet Barnett face to face, but Dodds and Hicks feared that Brown might back out if he returned to Chapel Hill while the committee moved on to meet Barnett in St. Louis. The committee agreed.

That may sound like Brown’s commitment to Texas could be too fragile, but negotiations are always very sensitive and might have fallen apart if Brown had gone back home and become nostalgic.

Besides, if you’re ever going to have a chance to dance with who brung ya and hire the “next Darrell Royal, ” you’ve got to invite ’em to the dance first. Texas wisely did just that.