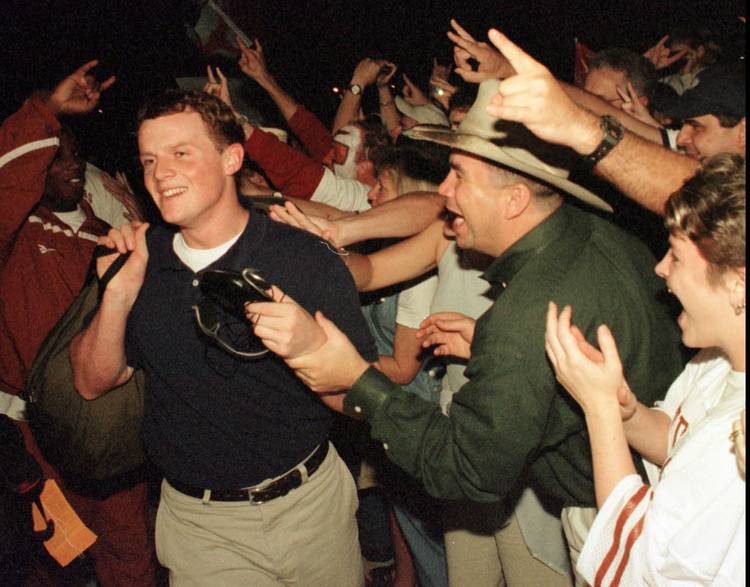 taylor johnson/AA-S photo 10/31/98...UT quarter Back Major Applewhite arrives back at UT after the big win over Nebraska. Applewhite pushes through a large crowd gathered to welcome the team back.

LINCOLN, Neb. — Mack Brown would have built Rome in half a day. And painted the Sistine Chapel over lunch.

The brand-new Texas football coach built up a reservoir of goodwill over the off-season and then substantiated it by laying a winning foundation with a four-game victory streak over admitted college football nobodies, such as Iowa State and Oklahoma.

But on a chilly, slate-gray October afternoon in the heart of the Midwest, his construction of a solid program — in place of occasional thrilling wins, but also disheartening losses and mostly illusion and false hope — just zoomed light years ahead of schedule.

Texas slayed a giant and showed signs of again becoming one itself.

The 37-27 win over Nebraska in St. Louis two long years and one coaching change ago that had seemed so chest-swelling, so wonderful to some and so much a fluke to many, was repeated in yet another stunning upset of mighty Nebraska. Did someone say upset?

Hey, we now know the Longhorns never lose to the Cornhuskers. Not at a neutral site. Not at sacred Tom Osborne Field at Memorial Stadium. Can you imagine what would take place if Texas ever caught this red-clad bunch in Austin? It’s frightening.

All of a sudden, Nebraska doesn’t seem so . . . so . . . Nebraskan . Hadn’t it been 48 games ago that a Washington team destined for a share of the national championship ventured in here in 1991 and left with a win? Wasn’t it eventual national co-champion Colorado that escaped with the last conference victory on these hallowed grounds in 1990?

Now, we’re not saying Texas will win this year’s national title — that’s a ways off, but not as far as before Saturday — but the Longhorns stood toe to toe with one of the biggest machines in college football history and came out on top 20-16.

A sandblaster couldn’t have wiped the smiles off Brown, his assistants or the 66 Longhorn players as they were serenaded by the Longhorn Band and the sliver of 4,000 orange-clad fans in a section in the southwest grandstands. Since those humiliating defeats by UCLA and Kansas State a scant month ago — “we left K-State kind of in turmoil, ” tight end Derek Lewis said — the Longhorns have traveled farther than Lewis and Clark in their journey this season.

“We’re so far ahead of what I thought we’d be, ” Brown said. “At halftime of the UCLA game, I didn’t know if we’d win another game.”

After five straight wins, Longhorn fans might be wondering if they’ll lose another game. Such is the confidence of a 6-2 team that trailed for only 10 1/2 of the game’s 60 minutes, came from behind to win in the fourth quarter for the second straight week and played balanced offense and ravenous defense behind the efforts of linebackers Anthony Hicks and Dusty Renfro.

It also should have sealed the Heisman Trophy for human sledgehammer Ricky Williams, who battered his way for 150 yards. Who cares if Williams can’t pass? Could Charles Woodson? Start polishing that speech now, Ricky.

In some respects, this Texas team is the embodiment of Bryan White, who dropped more balls than a drunk juggler last year and was demoted to fifth wide receiver. The forgotten senior had one catch all year, but responded with two of the biggest catches of Saturday’s game — including a dramatic 76-yarder — to set up the Longhorns’ final 10 points.

This landmark win should jump-start Brown’s program, convince every blue-chipper from Lufkin to Laredo to be a Longhorn, and restore Texas to the Top 25. “We’d better be, ” quarterback Major Applewhite crowed, “or it’s a joke.”

It also should send shivers down the spines of the Aggies, who correctly thought they had done something big by beating Nebraska at College Station. In only his eighth game at the helm, it gives Brown an early milestone win that took him five seasons to snare at North Carolina, a 31-9 upset of Southern Cal.

The shocker also temporarily knocks the props out of Nebraska, the college game’s only true dynasty of the ’90s. The emperor may not be entirely naked, but he’s dressed more for the beach than a blizzard.

Texas, meanwhile, has arrived. Admittedly, that’s a scary thought. In college football, you can depart almost as fast as you arrive. When Wane McGarity clutched Applewhite’s 2-yard pass for the clinching score, offensive coordinator Greg Davis said it “reminded me of Dwight Clark’s catch in the end zone against the Cowboys.”

Hey, dynasties have to start somewhere. So do rivalries. My e-mail has been clogged by fighting-mad, seeing-red Nebraska fans who groused that Texas is flattering itself by my suggestion that this series is a budding rivalry. Hah, they strutted. Texas should be so lucky to be in Nebraska‘s league.

And they were right. A rivalry takes two. This series has been far too one-sided to be considered competitive.

In truth, Nebraska isn’t going anywhere, but Texas is finally going somewhere. Or, as Renfro said, “nowhere but up.”