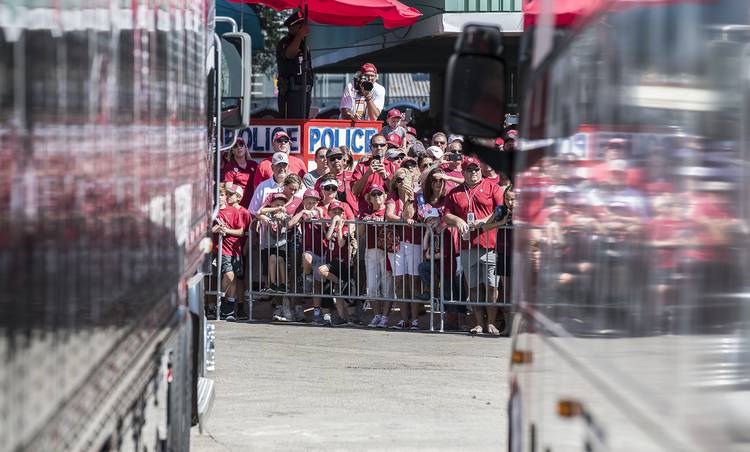 OU fans look on as the Oklahoma Sooners make their way into the looker room in the NCAA college football game against Texas at the AT&T Red River Showdown Cotton Bowl Stadium in Dallas Texas Saturday, Oct 14, 2017. This game makes up the112th rivalry match up. (RICARDO B. BRAZZIELL / AMERICAN-STATESMAN)

In these days of scholarship limitations, the one-year turnarounds at Texas with Mack Brown and Arkansas with Houston Nutt are the exceptions, not the rule.

That, Big 12 coaches think, is something Oklahoma fans and administrators need to remember when John Blake’s replacement as the Sooners’ football coach is named.

The Sooners, former giants on the college football landscape, have snoozed for much of the past decade. Despite winning three of his final four games as coach, Blake did little to wake them, finishing his three-year tenure with a 12-22 record.

“Let’s hope they stay asleep awhile,” said Bob Simmons, who has a vested interest in that as coach of nearby Oklahoma State. “To say you can bring back a program immediately, well maybe 20 or 30 years ago when you had unlimited (scholarship) numbers, yeah, you could do that. But it’s not usually going to happen overnight anymore.”

Blake made a brief public appearance Monday, the day after OU regents voted 4-2 for his dismissal after a four-hour meeting. He spent 2 1/2 minutes reading a statement, but took no questions.

“This program is headed in the right direction,” Blake said. “We came here for a purpose, to get the foundation established to be a winner.”

His successor, Blake added, “will have young talent, a group of young men that knows how to win, a young, talented team.”

But whoever becomes OU’s fourth coach since 1994 — initial speculation centers on Georgia’s Jim Donnan, a former Sooners offensive coordinator — will have a his hands full.

Oklahoma does have some talent, but most is on the defensive side, especially if tailback De’Mond Parker follows through with his plan to leave for the NFL. The Sooners offense was a mess under Blake, who could never seem to decide on a base formation or a quarterback.

And the new coach will inherit an angry, upset team. For all his shortcomings as a coach, Blake was immensely popular with his players. While they might have been caught up in the emotion of the moment Sunday night, some players predicted numerous transfers.

“Half the team might even be gone,” senior tight end Jason Freeman told the Daily Oklahoman. “I think guys that have a redshirt year to burn will (leave). They’ve got to comfort these young guys, because if they don’t there’s going to be some guys that are going to leave. They could lose a lot of good players.”

But whoever becomes the OU coach, Sooners fans had better not expect an immediate return to the glory days that produced six national championships, the last coming in 1985.

“The college football scene has changed. It’s very difficult to be dominant year in and year out,” Missouri Coach Larry Smith said. “You just can’t return to the glory days instantaneously, which is what a lot of alumni and even administrators seem to want.”

A&M’s defense has vaulted ahead of Kansas State’s to the top of the Big 12 charts in total defense because the Wildcats have surrendered 755 yards in their past two games.

Going into the Texas game Friday, the Aggies lead the league in total defense, allowing 250.8 yards per game while K-State is a close second at 251.6. A&M is second nationally behind Florida State’s 214.8 .

But Coach Bill Snyder doesn’t seem overly concerned about the Wildcats’ slight slippage the past two weeks. Playing Nebraska and Missouri, he noted, can mess up anyone’s defensive stats.

“My concern is not off the chart,” Snyder said. “Obviously there are some issues that have to be addressed and will continue to be addressed, but not by any stretch of the imagination are we close to the panic stage.”

Not that they need one, but A&M Coach R.C. Slocum thinks the Kansas State Wildcats have a distinct advantage going into the Dec. 5 Big 12 championship game because, unlike the Aggies, they have this weekend off.

The Aggies’ full attention, Slocum said, is directed toward Friday’s battle with archrival Texas. The Wildcats, meanwhile, can begin preparing for A&M.

“It’s a tremendous advantage for them,” Slocum said. “They get some time off to rest up, study film and get ready. I don’t know how you avoid it, but it appears to me that the conference office should do something to prevent that from happening in the future.”

“Undoubtedly, the week off will benefit us immensely,” he said.

FROM THE ARCHIVES (Nov. 1, 1998): BOHLS: Brown building beast of a team very quickly

FROM THE ARCHIVES (Nov. 27, 1998): Leading a Texas football renaissance