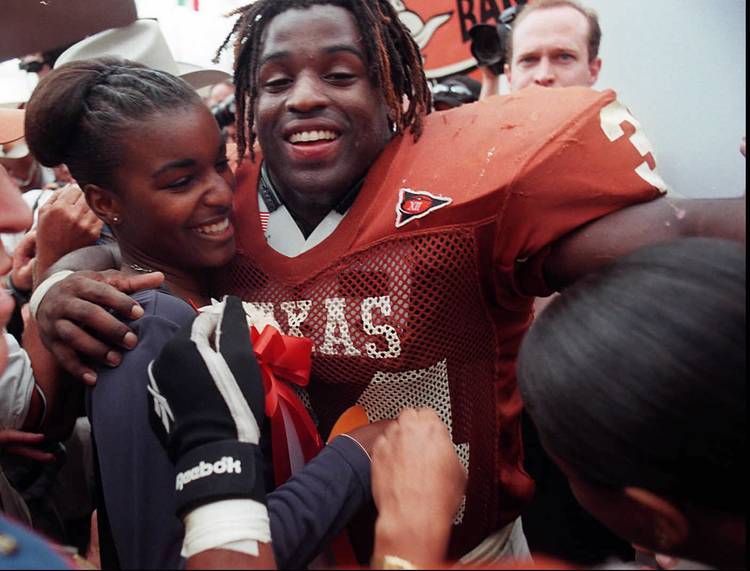 Photo by Brian K. Diggs/AA-S - Texas running back Ricky Williams hugs his sisters after the game against Texas A&M at Memorial Stadium Friday, Nov. 27, 1998. During the game Williams moved ahead of Tony Dorsett to become the NCAA I-A all-time leading rusher.

In a palpitating ending befitting the final regular-season game of the best running back that college football has ever known, the University of Texas football team once again raised its play to a level that would make Ricky Williams proud. Not to mention make him a winner in his last game at Royal-Memorial Stadium.

His teammates didn’t cart Williams off the field on their shoulders, maybe because they couldn’t get near him in the mob scene that was the aftermath of the Longhorns’ last-gasp, 26-24 victory over sixth-ranked Texas A&M. But then, he’s already had quite a ride.

After blowing a 23-7 fourth-quarter lead, Texas rallied for its fourth last-quarter win of the season and ensured that Williams‘ footrace with Tony Dorsett wasn’t reduced to a footnote. He rushed for 259 magical yards and raced into the history books, stamping himself in the minds of the mesmerized 83,687 fans on hand and the millions more in living rooms everywhere as the best of all time.

As Williams so poetically said afterward in a summation of his career, “I’ve had a good time.”

Alas, he might make a better editor than he already does a runner. He’s never been known to run his mouth as much as his constantly churning legs. For certain, a good time was had by all wearing or thinking orange as the Longhorns produced championship-caliber efforts from every corner, lastly from Kris Stockton, who knocked home the game-winning, 24-yard field goal, this time without kissing either upright.

Williams can thank a large, physical offensive line for springing him for his 6,279 career yards. He can be grateful for an unselfish fullback named Ricky Brown, who had zero carries Friday but a zillion blocks. The new college football rushing king can appreciate wideout Wane McGarity’s downfield block that came near the end of his record-breaking, 60-yard touchdown run on “L King Zin 53” against an Aggie defense that hadn’t given up a single rush longer than 38 yards all year. He can send a thank-you note to a Texas defense that hadn’t suffocated an opponent on the ground like this — an incredible minus-7 yards — in seven years.

Without a team playing up to Williams‘ level, there would have not been anything remotely close to the eight wins in 11 tries this season. There would be no likely postseason appointment on New Year’s Day at the Cotton Bowl. First-year coach Mack Brown wouldn’t be saluted as Texas’ next savior, an ultimately more significant development from 1998, given that the NCAA frowns on more than four years of eligibility for players. “Texas is going to be really good in the future, ” Williams said.

We can be thankful Williams chose to exhaust all four years of his eligibility, a blaring message that should not be lost on aspiring underclassmen. He won’t be back, but 14 Texas starters will. Nor can Williams‘ overriding value to this team or this university be overlooked from a standpoint of exposure and excitement.

But during his emergence, a pretty decent team came together. What’s interesting is that of the 11 plays on the final Texas drive, Williams touched the ball only twice.

“But the defense was keying on Ricky, ” offensive tackle Jay Humphrey said. “They were expecting him to get the ball, and we used that to exploit them with the passing game.”

Williams put the finishing touches on as spectacular a college career as there has ever been, and he had a lot of help from his friends. None were friendlier or more helpful than an offensive line that has at least a pair of solid NFL prospects in offensive guard Ben Adams and Humphrey and a long-shot candidate in tackle Octavious Bishop.

Humphrey got himself in that same frame of mind by wearing a camouflage T-shirt under his pads Friday. He and his teammates won the war, and a cease-fire should be announced for the Heisman battle, a race that should have been moot weeks ago.

“If he doesn’t win it, I think there would be a riot in Austin, ” Adams said.

There was nearly one on the field in the afterglow of Texas’ second win over a top 10 team this season, the first time that’s happened since 1990. As storybook as the finish was, it didn’t go off exactly according to plan.

“I was supposed to dump water on Coach Brown, ” Adams said, “but in all the excitement I never had a chance.”

Adams can be forgiven one blown assignment. He and his teammates got everything else right on a sun-streaked November afternoon when a packed house saw history and reveled in it. Friday’s game will go down as one of the most electric moments in sports history in a city that’s all but been renamed Rickytown.

“He’s the greatest running back I’ve ever been around, ” Humphrey said. “I even started a rumor that the line would all like one of Ricky‘s dreadlocks dipped in bronze.”

That came as news to Williams, who smiled that disarming grin of his and said, “Yeah, if they can catch me.”

Given the view they’ve had of his heels the last four years, that ain’t likely.

FROM THE ARCHIVES (Nov. 27, 1998): Leading a Texas football renaissance