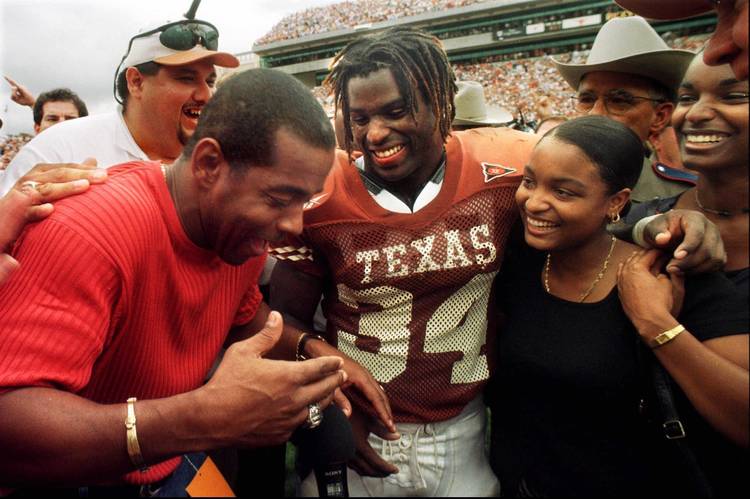 When you heard your name called Saturday night at the Downtown Athletic Club and nervously headed to a podium to address a national audience that’s come to know every single facet of your life from your dreadlocks to your gentle spirit, we can only imagine the swirl of emotions that probably engulfed you. That’s because we are feeling many of the same.

Maybe you’ll think back to your first day as a Longhorn when you broke that 65-yard touchdown run against Hawaii. Or you’ll reflect more on your 259-yard day against the Aggies about two weeks ago that probably etched your name on the Heisman Trophy you’re holding now.

Or perhaps your thoughts will take you back to the late afternoon on Nov. 15 in last year’s home finale against Kansas when you trudged off the field at Royal-Memorial Stadium with the mantra from the adoring crowd filling your eardrums. “Stay, Ricky, stay, ” they cheered in unison. You did stay, and we’re all the better for it, you included.

With the crowning achievement of a career littered with unprecedented accomplishments, you completed a most remarkable and memorable journey, and it’s been our rare privilege to have traveled along with you. I’ve personally been lucky enough to have witnessed all 48 of your collegiate games.

Yours has been a name that’s resonated across the country since that first night against New Mexico State more than three months ago when you busted loose for 215 yards. Little did any of us who watched you that calm September evening realize the magical ride you would take us on over the course of your final season.

We knew you belonged in the elite company you kept in New York City even before you pulverized defenses for 2,124 historic yards this year. Most of us stamped you as special long before this season rolled around, and you reaffirmed it with your stunning announcement in January that a college degree, a prolonged adolescence and a bond with your teammates were more important than a fat bank account.

Yours has been a compelling story linked by the renewed enthusiasm of a program fashioned by a charismatic new head coach. You didn’t have to return for your senior season, and you were honest enough to admit you came back for selfish reasons: because you enjoyed the college atmosphere and all its trappings. Certainly no one would have faulted you from turning professional early. Why, even Ben Adams, one of the linemen who helped pave the way for your NCAA record-breaking 6,279 yards, was dumbfounded when he heard on the radio you would return. “My goodness, Ricky, ” Adams recalled thinking at the time. “What are you doing? Take the money and run.”

Ricky ran all right — but not to the bank. He ran into history and out the other side as the most renowned running back in the history of major-college running backs. Better than Tony Dorsett. Better than Archie Griffin. Better than O.J. Simpson, Herschel Walker and Earl Campbell. You made history, Ricky, and took it in stride as well as you have all the hardware and honors that have been bestowed upon you.

Along the way, you’ve become possibly the most popular University of Texas athlete ever. Certainly you have joined the modern-day ranks of celebrated Longhorns such as forward Mike Wacker, Jim Krivacs and Johnny Moore from men’s basketball; Kamie Ethridge and Clarissa Davis from women’s basketball; shortstop Spike Owen; golfers Ben Crenshaw and Tom Kite; quarterback James Street; linebacker Tommy Nobis; and, of course, running back Earl Campbell, whose records you broke.

Your phenomenal year has even transcended the sports arena. Given your love of children and your affection for the late Doak Walker and his family, you have been a beacon of compassion and humility in a sea of narcissistic greed and end zone-dancing cockiness.

We can only hope yours will be a message that will be oft repeated, that future underclassmen might come to cherish their college experience as much as you and not be driven as much by the chase of the almighty dollar as by an unrelenting love for the game. Ricky, your four glorious years in Austin have swept by all too fast. The pleasure has been all ours.

P.S. Save me a dreadlock.

FROM THE ARCHIVES: BOHLS: Paint it in red:Horns are for real, and getting better