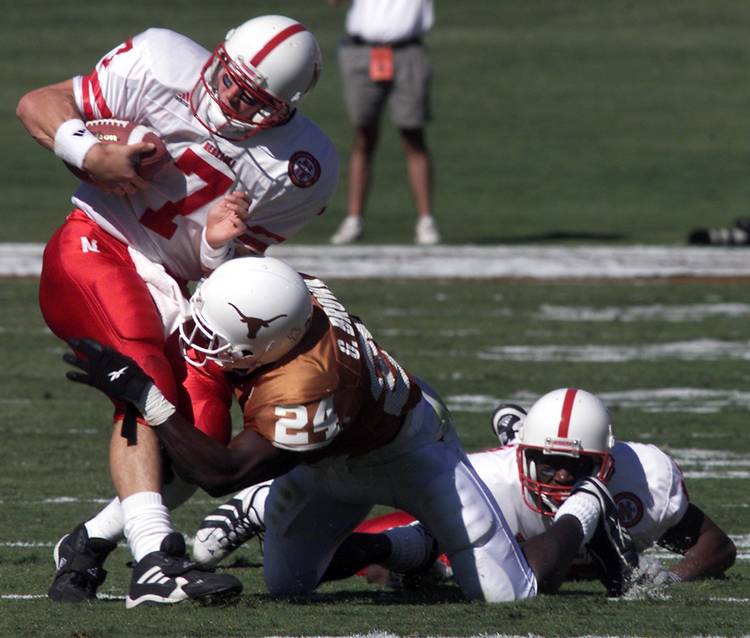 Texas’ annual win over Nebraska on a crisp Saturday afternoon created for college football was swell and all, but it must have left perplexed Longhorns fans with a real dilemma.

Just which victory over the mighty Cornhuskers has been the best?

And the last two might not have been possible but for the landscape-shaking upset in the inaugural Big 12 championship game in 1996.

But this one, this 24-20 heart-throbbing victory over third-ranked Nebraska before a full house at Royal-Memorial Stadium, further stamps the legitimacy of Mack Brown’s program still in its infancy and identifies Texas as a program on the rise ahead of schedule.

The Huskers, meanwhile, have to be looking for a psychiatrist’s couch somewhere. One loss could be a fluke. Two’s a trend. Three straight, and the Longhorns might think about appealing to the league office to play the Cornhuskers every year . You sure can’t call them upsets any more.

“It’s all mental,” said Texas flanker Kwame Cavil, who combined with fellow receiver Ryan Nunez on an “ugly bird” celebratory dance on the field afterward. “They can’t mess with us.”

Texas’ third consecutive victory over Nebraska made a mess of the Cornhuskers’ national championship hopes for the second time in three years. The Longhorns’ biggest home win of the decade had all the elements of a classic. Coming from behind (13-3). Scoring on the very next drive after giving up a fourth-quarter lead (60 yards). Making defensive stands (holding Nebraska to two field goals on four of its six red-zone penetrations and forcing two fumbles).

Call it a wake-up call for college football because the relentless Longhorns played like that alarm clock that you can’t turn off. Just one without a snooze button. Ranked 18th nationally and on the move, Texas can see the top 10 from where it resides and much, much more. It had invited more than 50 recruits amid the school- and state-record crowd of 84,082. Fifty highly impressionable recruits.

“We’re good. We’re for real,” crowed Nunez, whose big 39-yard catch set up the game-winning touchdown in the final six minutes. “What a great atmosphere this was. I wouldn’t be surprised if we had the No. 1 recruiting class again next year probably because of today.”

Doubters should note that Brown is making this splash with only one recruiting class. He’s had two bountiful classes, but only two freshmen — defensive end Cory Redding and offensive tackle Derrick Dockery — had substantial contributions Saturday. Wait till the rest of them grow up. Texas is already very good, and Chris Simms and Kenny Hayter are waiting in the wings.

The real measure of the program, though, can be summed up in Brown’s private thoughts as he was being carried off the field for the second year in a row after a win over Nebraska.

“I was thinking about Iowa State,” Brown said of his next opponent, chuckling about his profession’s occupational hazard. “That’s a real sick thing for a coach to do.”

No, Mack, that’s exactly what you need to be thinking. If not at Saturday dusk, at least by Sunday’s dawn. Resting on laurels has almost become another sport in this town. Texas has made a history of making history in big games like this, only to fall backward like clockwork.

Something tells me this time is different. Brown’s leadership and sellability, coupled with a veteran staff’s experience, offer comforting signs for the future. Carl Reese’s scheme produced maximum penetration from its defensive front. Greg Davis’s game plan sputtered in the first half but rolled in the second behind terrific protection from the offensive line, tough running and catching from Hodges Mitchell and Major Applewhite’s customary poise and late-game magic .

“We’ve been labeled a team that nickels-and-dimes you,” Davis said of Texas’ short, controlled passing attack. “But there are a lot of quarters and fifty-cent pieces built in there along with those nicks and dimes.”

Applewhite and Cavil showed they were money players down the stretch. Both of the quarterback’s touchdowns and 166 of his 213 came in the second half when games are won and reputations made. Cavil, too, showed his moxie with five of his eight catches and 74 of his 84 yards after intermission.

After back-to-back comeback wins over Oklahoma and Nebraska, even Brown has been taken aback by the fast track that his Longhorns are riding, winners of 14 of their last 17 games under him. Not so his players.

“We want people to have the same fear of us that they have of Nebraska,” said Texas cornerback Ahmad Brooks, who had a key, fumble-causing tackle of Correll Buckhalter near Texas’ goal line in the fourth quarter. “Nebraska’s a great team, the Big 12’s pride and joy. But we want to plant the seeds in people’s minds that we can be a great team.”