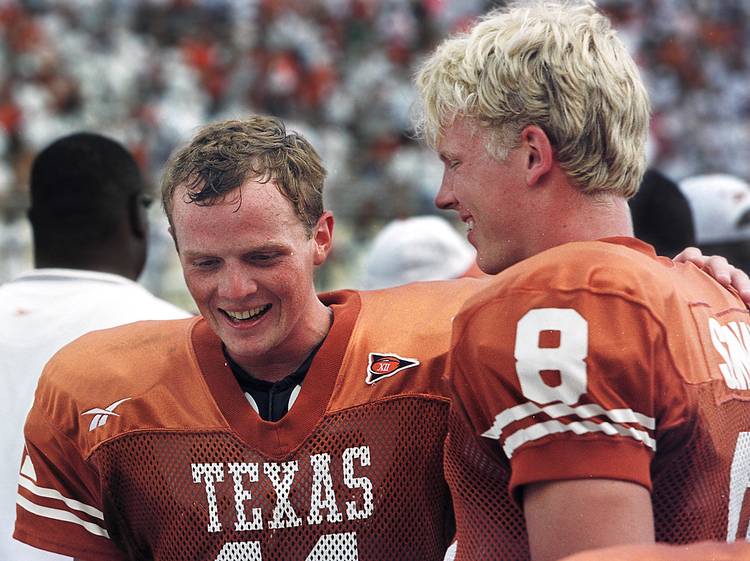 Mack Brown was not budging. Despite a season-opening performance that presented substantial and clear evidence to the contrary, the Texas head coach still insisted he has two starting quarterbacks.

That’s not the way it looked to 80,017 sun-parched fans at Royal-Memorial Stadium, a regional television audience, both football teams and yes, even the two starting quarterbacks.

Judging by Saturday’s set of circumstances in its 52-10 victory, Texas has a very average starting quarterback and the best backup quarterback in America. But that can change from week to week because Brown said he’ll still play two quarterbacks.

By chronology, Chris Simms was the starting quarterback. The sophomore took the opening snap and initially played only two series, noteworthy only for the pass that an opportunistic Louisiana-Lafayette cornerback ran in the opposite direction for the Cajuns’ only touchdown.

By performance, Major Applewhite was the most productive quarterback. The junior led the Longhorns to seven scores in seven possessions and played perfect football except for one series that ended with a Kris Stockton field goal. As Applewhite correctly said, “Points are points.”

And football teams aren’t baseball teams. A football team needs one starting quarterback, and Applewhite should have regained his job in part because Simms doesn’t look ready to produce big on the road against Stanford next week. There will be a day this fall when Simms has the hot hand and will have to bail out Applewhite, maybe even next week, but Major did have the clear look of a starter and a leader.

Besides, with 43 touchdowns in 25 career games, Major could easily emerge as a bona fide Heisman Trophy candidate. But he’d need big numbers that only a full-time starter can achieve and certainly could with a cast of great receivers like Brandon Healy and Roy “The Legend” Williams.

Brown’s decision to start Simms was a good one, but if he truly wants co-starters, it would have been wise in the long run to have come back to Simms quicker than midway through the third quarter with the outcome decided by a 45-10 score. Simms, who needs the repetitions under fire, came back into the game without pressure, without a fear of losing.

It is quite clear that Applewhite is a better quarterback at this moment, but we knew that before Saturday. Brown started Simms to see if he could become superior to Applewhite. Two series at crunch time won’t reveal enough empirical evidence to make a judgment. Ideally, Brown should have left Simms in the whole first half, but a 10-0 deficit against a huge underdog ranked 113th out of 115 teams by one national magazine would make any coach nervous enough to make a switch.

To be fair, Applewhite was given a better shot at success than Simms. This was no scientifically controlled experiment where all things were equal. Had he stayed in longer, maybe Simms would have steadied and had a fabulous day instead of completing seven of 14 for 88 yards and producing only one touchdown in his six offensive series.

When Simms was in there for his first two series, Texas was trying hard to establish the run. It was run on first down, run on second down on both possessions. On his first five snaps, Simms handed off four times.

When Applewhite came in to save the day — and his job — it was pass, pass, pass. On his first 23 plays, he passed 17 times and scrambled on another. Brown didn’t just change quarterbacks. He changed offenses. But give Major credit. He never ceases to impress.

The crowd, not oblivious to the 10-0 hole, lustily cheered Applewhite’s arrival in the huddle. From that point on, he was almost exclusively in the shotgun whereas you’d have thought the fans wanted Simms at the other end of the shotgun, although they later loudly applauded his return, too. Simms must have been inwardly jealous when Applewhite had the chance to play in Texas’ “one-minute tempo offense” with four wide receivers.

When asked his reaction when he was informed Applewhite was taking his place, Simms said, “I’m just extremely disappointed (in his own play), and I do want to punch a wall.”

Applewhite certainly felt the same when Simms got the opening nod.

But only in his dreams could Major have had a better game. He once completed nine straight and threw for 315 yards and four touchdowns. He grinned broadly for a picture with a Silver Spur afterward. In the training room, he did interviews with three national talk-radio shows.

It was good to be Major Applewhite on Saturday. The start didn’t belong to him, but Austin did.

“I’d be lying if I didn’t have the feeling (Simms would start). You can say fine and accept it and pout or say fine and accept it and keep working because college football changes like that, ” Applewhite said, snapping his fingers for effect. “I had a peace about the situation. This will be a year thing, something we have to deal with. We have two good quarterbacks who can win games. Some teams don’t have one.”

Texas has two but needs one starter. Simms picked a bad day to have a bad day but, in essence, threw just two lousy passes, one lousier than the other. The worst one went to a Lafayette guy named Hunter, which is appropriate because Simms is now the hunter and Applewhite the hunted.