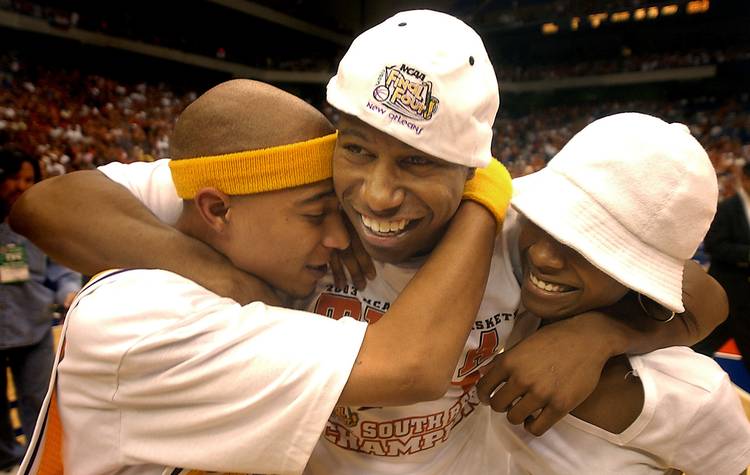 SAN ANTONIO — Just before heading down the highway for the South Regional, Rick Barnes wistfully shared some of his recent mail with the Texas players. He wanted to ensure that they had an appreciation of what was at stake and what had gone on before.

In this case, long before.

The Longhorn coach read an inspirational, hand-delivered letter from the son of the late Jack Gray, the first Texas All-American basketball player and the last Longhorn head coach to take a team to the Final Four.

Until Sunday, that is.

Barnes followed Gray and Bully Gilstrap and became only the third Texas coach to reach the Final Four, but he made positive that T.J. Ford and his teammates knew their history before they attempted to repeat some.

“T.J. wasn’t even aware Texas had ever gone to the Final Four,” Barnes said. “In the letter, Jack Gray Jr. said T.J. and the team stood for all the things that his dad did. Unselfishness. And I told the team they were called the Mighty Mice.”

Ford’s nickname, in a piece of tantalizing symmetry, is Rat.

While Gray’s 26-2 third-place team in 1947 came about its nickname because of three starters who stood 5 feet, 10 inches or shorter, the derivation of Ford’s monicker was, uh, less height and more bite.

The better to take a bite out of college basketball.

Ford and friends bit off exactly what they could chew Sunday, finishing off seventh-seeded Michigan State 85-76 to win the South Regional and advance to the Final Four. Again.

Like clockwork, it seems, Texas plays on basketball’s biggest stage every 56 years or so.

It will do so in New Orleans on Saturday arguably as one of basketball’s pre-eminent powers, which says something about a Texas program that was in turmoil when Barnes arrived five years ago and now is a titan.

Texas will venture into what Ivey called “sacred land” as the lone remaining No. 1 seed, joining No. 2 seed brethren Kansas Jayhawks and a pair of No. 3 seeds in Longhorn opponent Syracuse and Marquette.

Gone are all the No. 1 seeds, the traditional powerhouses like Kentucky and Arizona. Oklahoma, too, made its exit, falling short of a consecutive Final Four appearance. Sorry, Sooners. The Horns can send you the postcard this year.

While America figured Texas would be the least likely top seed to be wearing Mardi Gras beads like Deginald Erskin did as he climbed the ladder to cut down the net in the postgame celebration, Barnes’ club instead was the only survivor.

So does that make the Longhorns the automatic favorite?

“I don’t think we’re ever the favorite automatically,” said Sydmill Harris, who hit two three-pointers in the first half and finished with 12 points. “I don’t know why people doubt us.”

The doubters must give this 26-6 team its due now after this landmark victory that ranks as the school’s biggest athletic moment in a major sport since the last football national championship in 1970.

Texas’ shocking win over Nebraska to claim the 1996 Big 12 football crown stands close, but that was a conference title. “Roll Left” gave James Brown and the Longhorns a ring, but this basketball team’s on a roll the likes of which are unmatched in school history.

As in all four NCAA tournament games, Texas played defense, hit free throws (24 in the second half) and got stellar handiwork from its point-guard magician. The Longhorns took care of a pesky Michigan State team that refused to buckle in front of 30,169 fans that included a small green patch of Spartan faithful numbering about 600 and an endless quilt of orange.

“We can’t even pack the Erwin Center, but we can pack the Alamodome,” said Ivey, who had six crucial rebounds to go with his normal suffocating defense. “I expect a lot of people to jump on the bandwagon, but that’s OK. I’m not going to eject anybody.”

Instead, fans are lining up to embrace a roughhouse powerhouse in the making. They suddenly can’t get enough of a team with the best player in the nation and a bunch of selfless role players who are carving out a special place for themselves in Texas basketball lore.

But as much as the team relished the moment, another message resonated throughout a building that was a tidal wave of orange and upraised fingers and noise. While the seconds ticked away, Ford dribbled near the Texas bench, his fingers locked in the Hook ’em Horns position.

Amid all the bedlam after the Longhorns’ greatest win ever, Barnes hugged the best player he’s ever coached and said, “We’ve got more work to do.”