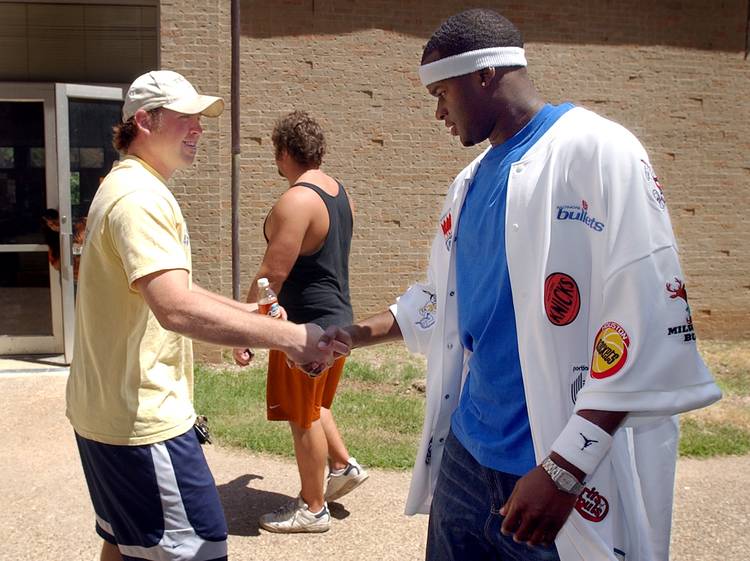 8/06/03-Rodolfo Gonzalez/AMERICAN-STATESMAN: University of Texas' quarterbacks, Chance Mock, left, and Vince Young, right, shake hands as they greet each other during the Longhorns team check-in held at the Jester Center on Wednesday, August 6, 2003. Both freshman and veterans reported to campus to ready for the 2003-2004 football season which begins summer practice on Thursday. Walking past them is offensive guard, Kasey Studdard, center.

On the eighth play of his first possession, Chance Mock dropped back, spotted B.J. Johnson on a skinny post and drilled a clothesline pass to him for a 52-yard touchdown.

Mock connected on all three of his passes on that drive, and hit the senior flanker in perfect stride.

“Yeah, I was surprised, ” Johnson deadpanned.

Then, he broke up and admitted he was only joking with his new best friend, the guy who’s going to get him the ball 60 or 70 times. Johnson and his teammates who make up the best group of wide receivers in all of college football don’t mind busting Mock’s chops.

Mock may be called “The General” for his quote about wanting to be like U.S. commander Tommy Franks during the Iraq war and simply direct the offense. But the receivers are going to make him earn his stripes. Or bars.

It’s a good-natured — and acceptable — form of hazing. Mock willingly takes it all in, just as he does an offensive playbook with everything from play-action passes out of the shotgun to throwback screens to the tight end.

The fourth-year junior from The Woodlands has always boned up on the 3-inch-thick Longhorns playbook, and even called some of the plays in practice. But not until this fall has he been afforded the opportunity to be Texas’ starting quarterback and run a play before the fans are filing to the exits in the fourth quarter.

Mop-up no more, Mock is in charge.

“My redshirt year was the best thing I ever did and the worst thing that’s ever happened to me at the University of Texas, ” said Mock, a candid and likable personality who’s a politics-loving Bill O’Reilly fan and who’s so independent, he owns no cell phone. “Holding the clipboard and wearing a baseball hat. I absolutely hated it.”

There’s a strong chance you’re going to love him.

If the fall workouts and Saturday’s scrimmage are any indication, the 6-foot-2-inch, 214-pound Mock looks entirely capable of running this diverse offense with all its gadgets and whistles that unfortunately don’t always show up on Saturdays.

He’s bright. He’s tough. He has a strong arm. He’s very, very mobile. He knows no fear, but he does know the offense. While understudy Vince Young says he practices calling plays in front of his mirror and is far, far from ready, Mock can probably recite them in his sleep.

Mock is a rough-and-tumble quarterback who operates with the mentality of a bruising linebacker like his father, Mike, who played the position for the New York Jets.

“I think we need some of that, ” safety Dakarai Pearson said.

Dallas Cowboys Coach Bill Parcells looks for a reliable quarterback who can just “drive the bus.” Mack Brown & Co. pretty much have the same job description for their guy.

“I don’t want to be fancy, ” Mock said. “My job is to get us from Point A to Point B. I’m comfortable. With all the players we have, how can you not? I just have to get the ball to them. I don’t have to do a whole lot.”

Mock could fit right in with the current trend of national-champion-winning quarterbacks, running and throwing in lockstep with Ohio State’s Craig Krenzel, Oklahoma’s Josh Heupel and even Miami’s Ken Dorsey. The same can be said for the pro level, where NFL clubs are winning Super Bowls with Brad Johnson and Trent Dilfer.

Don’t mess it up makes for a neat, little slogan.

It would have been very nice had Mock thrown at least one pass in the heat of battle instead of nine in his career. Brown acknowledges that he should have played him more behind Chris Simms and unfortunately is paying the price and running the risk now.

“Chance is doing really, really well, ” Brown said after his 5-for-9 day with 108 yards and two scores. “His performance today was better than his numbers.”

But numbers won’t begin to reveal Mock’s success this season. With offensive playmakers such as tailback Cedric Benson and receivers Roy Williams, Sloan Thomas and Johnson, he’ll be more of a traffic cop. But Mock will turn a head now and then and turn upfield in an instant on bootlegs and options.

“Chance brings a lot to the table, ” Johnson said. “He was a 1,000-yard rusher and passer in high school. Chris, uh, wasn’t too mobile. Chance just loves to play the game.”

In less than three weeks, he’ll finally get the chance.