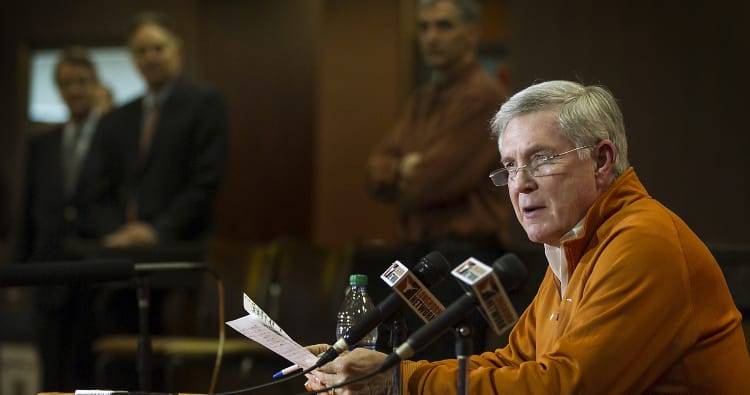 SAN DIEGO — It was the day before the Holiday Bowl, and Mack Brown was reminiscing about the good, ol’ days.

Back when he was just starting out as a graduate assistant coach at his alma mater, Florida State, when he was living with his new bride in a 31-foot trailer and making ends meet with a minimum-wage job of washing trucks. Garbage trucks.

Every Saturday, Brown would pry away the grit and grime off seven huge garbage trucks with a power washer.

“They would really stink,” he recalled. “That was not a good job.”

Back then, though, the only pressure around was that coming out of that high-velocity hose. Almost three decades later, Brown is trying to give his Texas program that same clean, fresh-scrubbed look, albeit in a more pressure-packed, high-stress environment.

A makeover of some kind is certainly in order after the foul odor emanating from the Longhorns’ 28-20 loss to Washington State in Tuesday’s Holiday Bowl. That the Longhorns could turn in such a sloppy, uneven performance, even after what Brown called his best bowl preparations ever at Texas, is downright baffling and cause for alarm.

Nothing’s broken. You don’t win 32 games in three seasons and need a complete overhaul. But there are noticeable cracks in the state’s flagship football program, which can maul Rice and Baylor but can’t knock down all its opponents in a single season.

Brown needs to look hard in the mirror, make a comprehensive examination of his entire staff and way of operation and fix whatever it is that has prevented him from winning even one conference title in 16 seasons at Texas and North Carolina or playing in a Bowl Championship Series game. That could mean tough choices and possible changes at both coordinator spots.

If Brown doesn’t apply such scrutiny and isn’t willing to make tough changes — such as he did last year when he wisely hired running backs coach Michael Haywood and elevated Mac McWhorter to handle the offensive line — that means he is satisfied with the level he has taken this program. And it’s a high level, just not high enough.

Greg Davis’ offensive game plans still lack imagination in the Longhorns’ most-critical games. There was no razzle and less dazzle against Washington State.

Why no rollouts with Vince Young? Heck, why no Vince Young? He played just nine snaps in the second half. This is the way they use the future of the franchise? If Davis can’t milk the immense talent out of Young, Brown needs to find someone who can.

Chance Mock is a good quarterback, but Young has a much bigger upside and needs to be on the field more. As for Mock, he may not listen to whispers that he could transfer to Northwestern State or some other NCAA Division I-AA program and gain eligibility immediately. Texas certainly needs him.

However, if Mock does leave and Brown does not sign a quarterback prospect such as Florida’s Xavier Lee, Texas could be in serious trouble. There is a possibility that Matt Holliday — the 6-foot-4-inch quarterback and son of new Longhorns pitching coach Tom Holliday — could arrive on campus next August if the Colorado Rockies don’t include the 23-year-old outfielder on their big-league roster.

On Tuesday night, though, after Texas had worked so hard to establish an identity as a physical, run-oriented offense over the past six games, it veered far away from that brand against Washington State. The Longhorns ran maybe three of the zone reads that have made Young and Cedric Benson such formidable threats. Texas took away its own strength before WSU could.

Longhorns defensive coordinator Carl Reese is as fine and honorable a person as you’ll find in this business, but he, too, may be ready for a change of scenery. He might give way to Duane Akina, promoted from Longhorns secondary coach. Brown also would be wise to look outside at, say, Louisiana State coordinator Will Muschamp or former Longhorn Jerry Gray, until Monday the Buffalo Bills’ highly respected defensive chief.

Reese’s defense gave a strong account of itself Tuesday with aggressive nickel and dime packages and basically allowed WSU one 66-yard drive, a 54-yard bomb for a score and not much else. But Texas’ pass rush didn’t produce a sack, and missed tackles have been a noticeable problem at times.

Texas could very easily be a top-10 team next fall, but it will have to break in three new receivers and relocate its passing touch. It needs more fire, more intensity. Upgrading its speed is essential. The secondary has talent in Phillip Geiggar and Michael Griffin, but there’s work to be done.

But make no mistake: the foundation for an unbeaten season is there.

For now, the answers aren’t clear.

Perhaps the problem is one of motivation because Washington State on Tuesday, Arkansas in September and Oklahoma every October seem to play with a true swagger. Maybe it’s a mind-set missing from the Longhorns.

Or maybe Mack Brown is just a very good 10-3 coach.