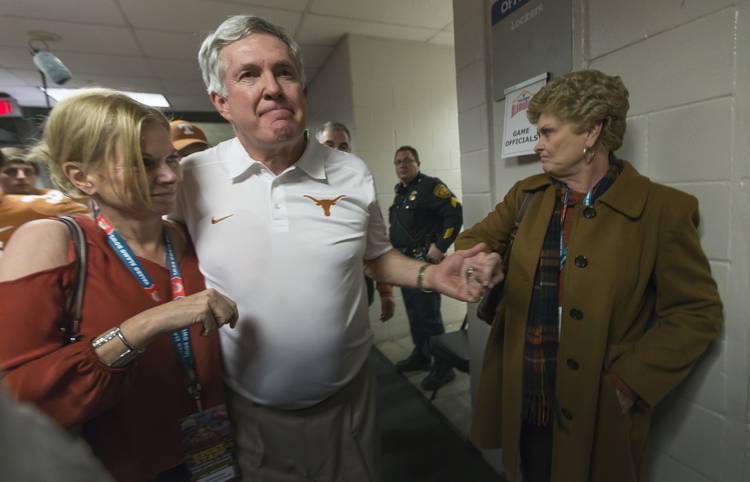 Texas Longhorns'Head Coach Mack Brown heads off the feild as the head coach for the last time with his wife Sally Mack after losing against Oregon Ducks 30-to 7 in the of the NCAA college football game 2013 Valero Alamo Bowl at Alamdome in San Antonio, Monday, Dec. 30, 2013. Heade Coach Mack Brown shakes former Basketball Coach Jody Conradt hand as he head to the locker room. (RICARDO B. BRAZZIELL / AMERICAN- STATESMAN)

I  don’t normally ask for a lot of help from my, uh, friends north of the Red River because I’ve made a pretty darned good career out of gooning them.

But today, I come groveling to your Sooner feet to beg you Okies to do us poor bedraggled Texans a big, swinging favor.

Oklahomans, puleeeeze hire Mack Brown away from the University of Texas. Give him a job. I know it sounds ludicrous, since hiring Mack Brown to coach Oklahoma would be like trading in a BMW for a Yugo. Or maybe a donkey cart. So you’re probably asking, “Hire Mack Brown? To do what? The dishes?”

I don’t care what you hire him to do. Just get him out of here, OK? The guy is making me crazy. Just give him a job, steal him away, and spare us the aggravation and burnt orange grief this man has heaped on UT football fans.

These are fans, by the way, who probably get what they deserve because they are foolish enough to believe at the beginning of each season that UT will win a national championship. Why do they think such a silly thing?

Is it because of the way Brown urges on his players on the sidelines by clapping his hands together sideways — arms held straight out, hands a-floppin’ — like a circus seal? They ought to call this guy the Clapper. How many national titles have been won by teams with coaches who clap like a seal? I keep expecting Brown to start making honking noises and ask for a fish.

As Henny Youngman liked to say, “Take my wife. Please. Take her.”

Oklahomans, let me rephrase that to read, “Take our coach. Please. Take him.”

Find it in your hearts to be good Samaritans and steal this guy away from us. Trust me. Nobody will stop you. Heck, I’ll hold the door. Besides, you’ll like him. He’s a dependable guy.

You can depend on his team showing up for the Mediocre Bowl smug and overconfident, expecting the opposition to roll over and play dead. But guess what? After the game, you can depend on UT being the corpse. And now it’s time for the autopsy.

Besides, he’d fit right in up there in Oklahoma. He’d look real good in red. Crimson would match that clueless, flustered look he gets on his face when he doesn’t know whether to run, pass or wind his watch.

After suffering through that nine-car pileup known as the Holiday Bowl, I’m wondering if Longhorn quarterback Chance Mock is going to file assault and battery charges against his own coaches for letting the Washington State defensive backfield mug him repeatedly. Saddam Hussein in his hole got better treatment than that poor guy got in that game.

Hey, with a hotshot lawyer like, say, Roy Minton or Dick DeGuerin, Mock would have a pretty darned good case.

John Kelso’s column appears on Sundays, Tuesdays and Fridays. Contact him at (512) 445-3606 or jkelso@statesman.com.

FROM THE ARCHIVES (Jan. 2, 2005): BOHLS: Texas shines in national spotlight