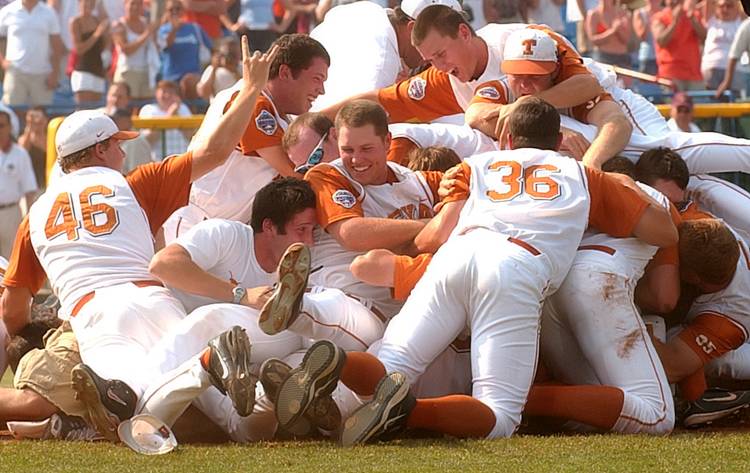 Like few others in college baseball, the sophomore center fielder can hit, hit with power, run, throw and catch pretty much anything in his area that doesn’t go over a fence.

They omitted a sixth tool.

While some might second-guess the baseball wisdom of giving up an at-bat by such a dangerous hitter to advance a baserunner, it would be smarter to judge by the bottom line.

During the first week of the College World Series, Texas Coach Augie Garrido revealed the level of his commitment to his philosophy of playing for a run every inning when he said, “I’d even bunt Babe Ruth.”

Augieball has taken over college baseball and thankfully replaced the offensive Gorilla Ball that Louisiana State’s Skip Bertman introduced in the 1990s.

Bertman’s wall-banging Tigers reshaped the game, but for the worse. Their reliance on the home run made pitchers cower, outfielders tremble and timekeepers run for their lives. LSU won five titles that way.

By the time Jason Lane and his Southern Cal teammates had sent 17 balls over Rosenblatt’s fences in six CWS games in 1998, the game had swung too far.

Asked his reaction to the Gorilla Ball era, Garrido cracked, “I wanted to get some gorillas. I mean, real ones.”

That was only lip service. Garrido wasn’t about to change his style. Instead, he has stuck with athletic defenders all over the field, versatile hitters and pitchers who could learn sliders and a straight changeup, which has always gotten out overly aggressive marquee hitters at Rosenblatt Stadium.

College baseball rebelled against Gorilla Ball, and the Augieball bandwagon began to sag with supporters. Aluminum bats were deadened, its sweet spot reduced. Balls were tweaked. Rosenblatt Stadium even brought in the fences by 10 feet in the outfield gaps.

College baseball has been saved, and teams such as Texas, Rice and Cal State Fullerton have helped restore order to the game. Consequently, America watched the Longhorns claim the 2005 national championship by sweeping Florida 4-2 and 6-2 with a selfless, team-first approach that actually resembles old-fashioned, textbook baseball. Not a single team reached 10 runs in any of the 15 CWS games.

“If you look at all the one-run and two-run games we played this year, it’s phenomenal,” Florida Coach Pat McMahon said. “When one pitch can impact a game, it’s refreshing and exciting. Texas uses all phases of the game and plays the game the way it should be played.”

The Longhorns relied on 10 sacrifice bunts and seven home runs to go unbeaten in five games and never needed more than six runs to win a game. Twice, they scored just four runs.

“Skip played Gorilla Ball and had the ballpark to play it in, and he recruited those kinds of players,” Arizona State Coach Pat Murphy said. “They scared people. But their run went out, and Coach Garrido got his run in with pitching and defense.”

Considering that the CWS set attendance records this year, the fans must be embracing this new wave of baseball, one without football scores, even if Texas’ Darrell Royal was in the house.

Furthermore, Texas could be back in 2006 for a fifth consecutive CWS appearance if Preston Clark can adequately replace catcher Taylor Teagarden, Chaise Fuller from Sacramento City College can measure up to departing shortstop Seth Johnston, Koby Clemens doesn’t sign with the Astros and wants to play third, and Jordan Danks solidifies an already strong outfield.

And provided they can all bunt, of course. They shouldn’t need a surplus of runs, not with all four top pitching starters returning.

That strategy isn’t going to change, which is one of the reasons Tom Holliday agreed to become Garrido’s pitching coach in June 2003 over an Italian dinner in Austin. The ousted Oklahoma State head coach fell head-over-heels in love with Garrido’s philosophy.

“When we met, I’ll never forget when he said, ‘I’m all about pitching and defense. We’ll score enough runs to win,’ ” Holliday recalled. “There was no mix of words. It was great to hear your boss say that because I never heard that before.”

Holliday will continue to hear that as long as he remains in Austin, which may not be that much longer, considering his impressive resume that finally includes a national title.

But as long as he does, he’ll be part of a winning formula that has produced a pair of CWS titles in just four seasons. That’s really no sacrifice at all.

FROM THE ARCHIVES (Jan. 2, 2005): BOHLS: Texas shines in national spotlight