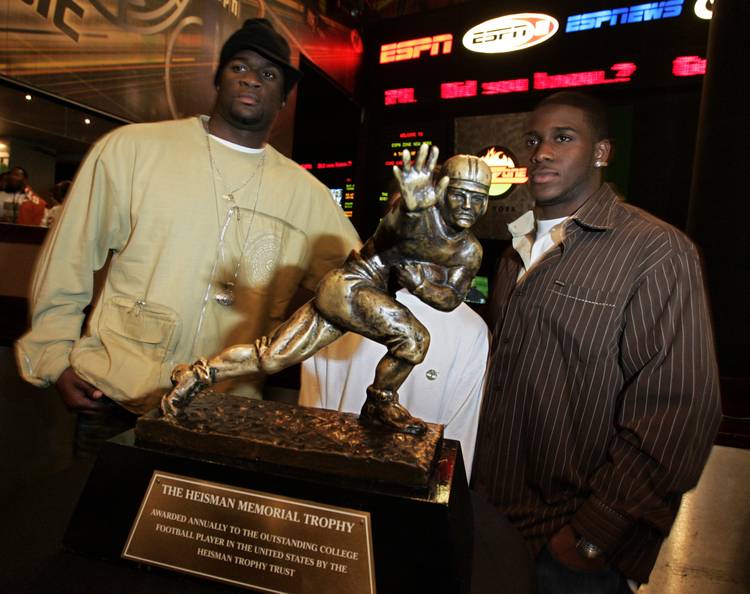 Beware of the slighted one, the one with the scowl, the unforgiving. Be on the lookout in just more than three weeks for a man possessed.

That would be Vince Young.

Just between us, I’m wondering if he will smile again between now and Jan. 4.

Vince is angry. And that’s a good thing for Texas.

Just as it worked in the Longhorns’ favor when USC buried UCLA in its regular-season finale to stake its claim for a third national title instead of squeaking out yet another narrow victory, Saturday’s Heisman Trophy coronation of Reggie Bush should help Texas.

The celebration of all things Trojan — back-to-back national championships, back-to-back Heisman trophies — can only serve to further reinforce the Big 12 champions as the biggest underdog since Buster Douglas.

A packed house of national media at the Hard Rock Cafe were taken aback by the bizarre, miffed reaction that the Texas quarterback had to the Heisman results. Reporters cast him as the angriest runnerup in the Heisman‘s 71-year history.

From the minute that Young stepped to the podium for a news conference gathering of about 100 reporters Saturday night, one could tell that he was in no mood.

He told us he was “disappointed” that he let down his teammates, his family, both his hometown of Houston and his adopted town of Austin. But he was much too hard on himself. Ever since he came to Austin, he’s been T.J. Ford times 10.

Vince is just not a happy-to-be-there kind of guy. And that’s anywhere, even New York City. He is an I’m-here-to-win guy first and foremost, which is why Longhorn fans have embraced him like few others.

Oh, they adored Major Applewhite. They worshiped Ricky Williams. They were awestruck by Earl Campbell.

But Longhorn Nation has embraced Vince Young with a fervency usually reserved for royalty. Darrell royalty, if you will. You see a No. 10 jersey around Austin more than you see Leslie these days.

I would hope Vince wouldn’t be so hard on himself. He should relax, let it sink in that he was voted the second-best player in all of college football. Considering that takes in more than 10,000 players from Wake to Washington, that’s darn good.

We understand Young’s sense of rejection. He’s a guy driven to succeed, a guy so consumed with winning and pleasing and laughing that anything short of that leaves him totally unsatisfied. He takes things personally, which can be very dangerous.

Vince Young is now the best player in America not named Reggie Bush. That might be enough for most, but not Vince.

As his coach, Mack Brown, said Saturday night at the Nokia Theater where the Heisman ceremony took place, “Vince is the most competitive person I’ve ever been around.”

Me, too. Of all the athletes I’ve had the pleasure of covering up close, the three most competitive have been Roger Clemens, Lance Armstrong and Vince Young. Pretty heady company, that. Others like Michael Jordan and Tiger Woods fall into that same class. They don’t hate to lose. They refuse to lose.

But elections are harder to control than football games. Too many variables. Vince may not have touched all the voters as he planned, but when he touches the ball on every offensive snap . . . well, as I said, beware, USC.

It should be extremely interesting to see how Vince turns this rejection into motivation to show his best side in Pasadena. The best athletes do that. Turn defeat into victory, despair into delirium.

The guess here is that Vince Young will play either the game of his life against the Trojans in the Rose Bowl on Jan. 4 or the nation could see a repeat of his performance against Texas A&M.

I’m betting on the best.

Young’s game turned sour at College Station when he tried to duplicate or better the performance of Bush the week before. Bush basically wrapped up the Heisman with his heroic effort against Fresno State, totaling 513 all-purpose yards.

Against an Aggie defense that ranked 115th versus the pass, Young was unusually ordinary. He pressed. The A&M defensive line penetrated the Texas backfield and hurried him into a 162-yard day with a single touchdown and one interception. Even worse, he ran for 19 yards on 11 carries, counting three sacks.

He wasn’t alone. Very few of the Longhorns outside of safeties Michael Griffin and Michael Huff played well.

Young’s body language and distance from his team on the sidelines told everyone at Kyle Field that day he knew the Heisman was gone, lost forever.

Vince may be humble, but he’s also very, very proud.

And that pride had been wounded. He responded in true Vince form, throwing three touchdown passes and running for another in a 250-yard game against Colorado in the Big 12 championship game.

Good, but not Heisman quality.

It came too late. But another chance comes soon, another shot at redemption when even better, Vince Young plays on the same field with the last two Heisman winners.

Don’t bet against him.