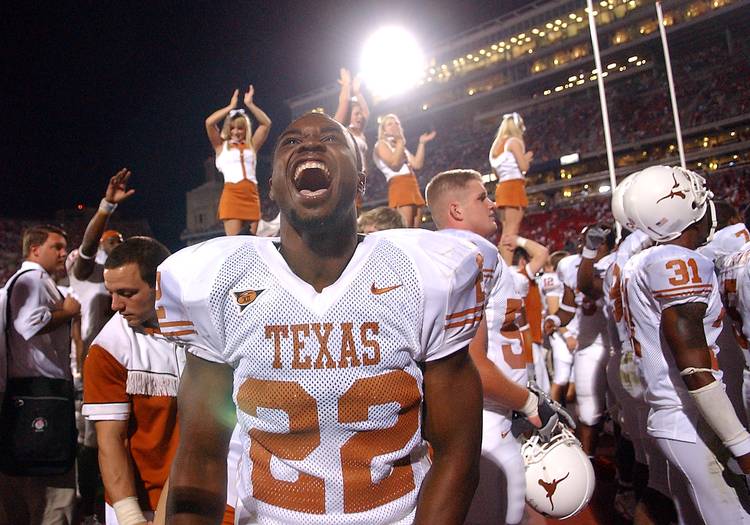 They grow ’em big in Texas, where the only things taller than the quarterbacks these days are the football team’s ambitions.

Tonight, Coach Mack Brown’s second-ranked team sees how it measures up against a dynastic Southern California program that will try to reach new heights in college football.

The Trojans are gunning for an unprecedented third title in a row. The Longhorns are looking for their first since 1970.

How long has that been? Well, 20 different schools have won national titles since Texas’ last crown. Eight have had multiple titles in that span. Heck, Brigham Young, Georgia Tech, Pittsburgh, Clemson and, I think, Howard Payne, have finished seasons ranked No. 1.

Brown is the fourth head coach in Austin since Royal to take a crack at returning the third-winningest football program of all time to the top of the heap. All he has to do is beat the team regarded as the greatest of all time.

USC may be on a collision course with history, but Texas has been feeling very nostalgic itself as it flirts with the school’s fourth national championship.

Somebody’s going to beat USC someday, we know that.

So why not Texas?

There’s been a special quality about this bunch of Longhorns since they won last year’s Rose Bowl. What has orangebloods so juiced is that this year’s Texas team is better.

Young is the nation’s second-most efficient passer. The defense is stingier. The running backs are faster. The wide receivers actually catch balls now.

Of course, beating the greatest team of all time carries a certain degree of difficulty. I’m calling it Texas 48-44.

Maybe the mental exhaustion of defending a title will catch up with the Trojans. Quarterback Matt Leinart said he walks around campus with his hood on and hat pulled down a little lower.

“It’s mentally draining,” he admitted. “It’s tough because every team gives you its best shot.”

In truth, USC was better last year, at least defensively. It crushed an excellent Oklahoma team, but those Sooners were bare in the secondary, had an immobile quarterback stapled to the pocket and had top-line players more worried about their NFL futures than the Orange Bowl present.

Had USC and OU played another nine times, Bob Stoops’ bunch might have won two or three. But unless you’re Pete Carroll — the Bill Belichick of college football, albeit one with a better wardrobe and smile — you may just get one chance at winning a title. That could be especially true if the 6-foot-5-inch Young decides he’s ready to become a Saint or a Jet next fall instead of remaining as Texas’ jet-propelled savior. I’m guessing he returns.

Young came up short in the Heisman running, mostly because he couldn’t control the balloting. He can pull more strings on a football field.

If tonight’s showdown is, indeed, going to be a chess match, it figures to be the world’s fastest chess match. Texas has had 10 one-play scoring drives this year and 10 plays of 50 yards or more.

The game will likely turn on corralling 4.25 sprinter Reggie Bush and containing Matt Leinart and 1,200-yard rusher LenDale White. Two of them have won Heismans. White, if he returns — which few expect — could win one next season if Young doesn’t.

Texas will have to outscore USC today, but here’s one who thinks Texas can. The Horns likely will come out throwing to back the Trojans off the line and create gaps for Jamaal Charles and Ramonce Taylor. Defensively, the Longhorns most certainly will try to squeeze Bush hard and make the often slow-starting Leinart beat them.

Few if any have questioned Texas’ pedigree. After all, as the No. 2-ranked team all season, it has shadowed USC since August.

Besides, its worth has been validated during this bowl season; the Longhorns beat six bowl teams in 2005. Of those six, four were bowl winners. USC played five bowl teams, which have gone 2-3 in the postseason.

The Longhorns won’t be caught off-guard. They’ve done their homework. Offensive coordinator Greg Davis delved so far back into the past that they even reviewed the game tape of USC’s postseason victory over Michigan two years ago, a Rose Bowl victory that propelled the winner to bigger and better things.