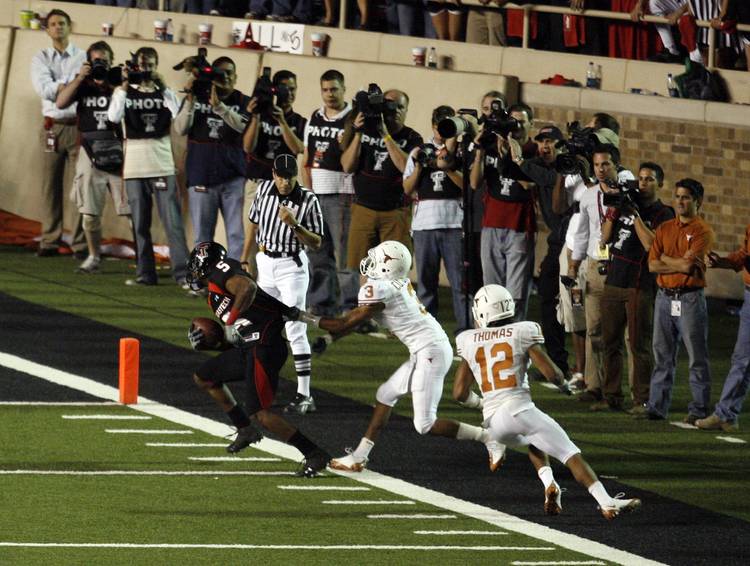 LUBBOCK – Texas Tech made its case to become the new No. 1 team in college football. And a very legitimate one, at that.

As for charging onto the field to celebrate, the Red Raiders still need a little work.

Tech’s student body prematurely ran onto the field three different times, thinking the game had ended, only to be ordered back to the sidelines before they were finally welcomed back. Who could blame ’em for jumpstarting since the Red Raiders are commemorating their first 9-0 start in 70 years.

At least they had something to celebrate.

As for Texas (8-1), it will require some work of its own after committing all kind of folly and foolishness to abandon the top spot in the rankings for the first time since knocking off Oklahoma a month ago.

It never made the big, drive-stopping play it absolutely had to have and, with three touchdowns in its last three series, started to flex its offensive muscle a little too late.

The Longhorns suffered every kind of imaginable breakdown, but rallied back from a 22-3 deficit despite the losses of star defensive end Brian Orakpo and clutch receiver Quan Cosby to injuries, the latter for almost the entire game.

But forget available excuses like too taxing a schedule or too many injuries. Texas played an excellent opponent on its home field and just wasn’t good enough.

From almost the first offensive moment of the game when it ran a slow-developing play from its own end zone and was trapped for a safety, Texas played just awful for much of the game, committing costly penalties and blunders. The Longhorns let Tech out of its end zone with a pivotal 46-yard pass to Ed Britton leading to Tech’s first touchdown, but couldn’t get out of its own.

However, heap a huge amount of credit on Texas for not retreating into a shell against an outstanding team even if its own mistake-riddled effort may have cost it a shot at a second national championship in four years.

Then, again the Longhorns’ chance at ultimate glory may not be gone even if freshman safety Blake Gideon let an easy interception – and so much more – slip through his hands. His miscue came on the play before Graham Harrell connected with sensational wide receiver Michael Crabtree for the game-winning, 25-yard touchdown pass with one second to play.

Make no mistake. This season has a ton of human drama – from heartbreak to euphoria – left before college football crowns a champion in Miami on Jan. 8.

Who’s to say if that will be Texas Tech, which still must navigate its own treacherous journey past loaded top 10 clubs Oklahoma State and Oklahoma before possibly taking down a Big 12 title game foe. But play like they did here Saturday night, and Mike Leach’s Red Raiders could be the last ones standing.

Tech’s that potent on offense and that improved on defense, holding the Longhorn offense to 26 points since one touchdown came on Jordan Shipley’s punt return. The Red Raiders scored on three of their first four possessions and seven of 13 with a blocked field goal figured in.

This win validated Tech as an elite team and stamped it as a program on the rise. It has beaten OU in two of the past three years, now has a victory over Texas and is tied with Penn State and Utah for the nation’s longest active winning streak at 11 in a row.

Asked what this victory meant to Tech, Leach said, “Oh, a big-picture question. You must be new.”

Tech may be new to No. 1 and could leapfrog unbeaten Alabama and Penn State to become the fifth top-ranked team this season .

Texas will be in that mix of teams contending for the title in Florida, but it lost control Saturday. Of everything.

The Longhorns don’t figure to fall far in today’s polls, but they lose the tie-breaker edge to Tech, and Texas may well fall behind surging one-loss teams like Florida and USC. Most likely, Texas falls to No. 4, maybe No. 5, but has time to rebound.

Colt McCoy wasn’t the same flawless quarterback he’d been for eight weeks, and now may be the time to make room for Harrell atop the Heisman Trophy frontrunner lists. Harrell was impeccable, throwing for 474 yards and two scores. McCoy had no help from a rushing game that totaled a skimpy 80 yards, and he was victimized by six costly drops.

“I realize how political it is,” Leach said of the Heisman race. “I find it pretty much a waste of time, but those who didn’t have (Harrell) on the list probably should put him on it.”

That said, these battered, bruised and bug-eyed Longhorns gave a valiant try that eventually earned them a 33-32 advantage over the Red Raiders and produced the most quiet 52,000 or so of Lubbock’s finest you’ve ever not heard. At least for a few moments.

But Texas led in this game for all of one minute and 28 seconds. It seemed like even less.

It left too much time on the clock for Harrell, a poised, accurate quarterback who takes a leg up on every honor that throwers compete for. He connected on 5 of 6 passes on that final drive and did what a team vying for No. 1 has to do.

What Texas could not do.

FROM THE ARCHIVES (Jan. 4, 2006) BOHLS: Somebody has to beat Trojans someday. Why not Longhorns?