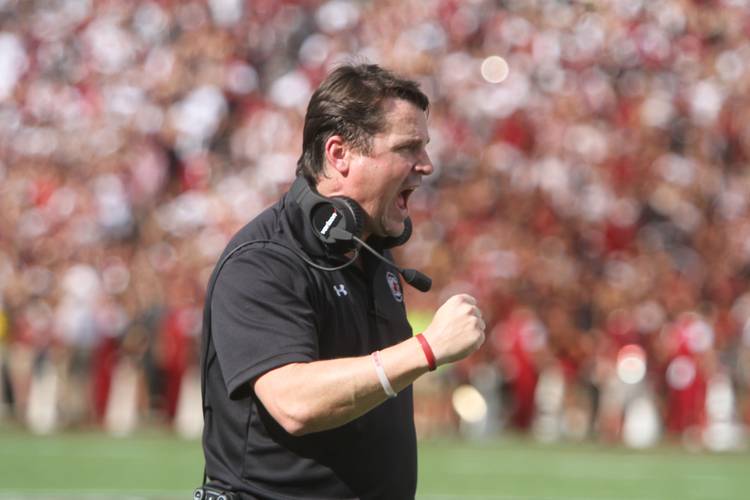 Head Football coach Will Muschamp of the South Carolina Gamecocks celebrates his team during the first quarter of their game against the East Carolina Pirates at Williams-Brice Stadium on September 17, 2016 in Columbia, South Carolina. (Photo by Mary Ann Chastain/ Getty Images)

The nationwide search for Mack Brown’s successor that no one knew was going on finally came to an end Tuesday afternoon.

Texas found him down the hall.

It was a good place to look.

In truth, it was more a county-wide search or really a room-to-room search when athletic director DeLoss Dodds found defensive coordinator Will Muschamp just four doors down from Brown at Moncrief-Neuhaus Complex and named him the Longhorns’ head coach-designate less than 11 months after his arrival in town.

Call him what you Will. And you can certainly call him rich because his salary has been more than doubled to $900,000. The best defensive coordinator in college football will have other labels as well.

Head coach-in-waiting. Mack the Next. The Limbo Coach.

Texas may not win the national championship this season, but it says here that Texas just put itself in position to contend for one for years to come. Muschamp‘s that good and was that much in demand.

All he needs is a little polish around the edges. He has the coaching acumen as one of the best game-day adjusters I’ve seen. He has a feel for the game’s flow and connects with the players like few others who have been at this school in some time. He’s the real deal.

By staying at Texas, the 37-year-old Muschamp turned away Washington, Tennessee and Clemson.

Muschamp is so desirable that Dallas Cowboys offensive coordinator Jason Garrett once confided to a staffer that he was so impressed with Muschamp during their time with the Miami Dolphins that he’d want to hire him on his NFL staff if Garrett got a head coaching job.

No one has a clue if Muschamp will be as good as Mack or better. We just don’t. We don’t even know if he likes the hitch pass.

There are no sure things in this business. Right, Michigan?

In fact, the Wolverines mess was one of the catalysts that stirred Texas to action and pushed it down this historic course. There wasn’t a hotter commodity in the nation than Rich Rodriguez a year ago, but he gets hired at Michigan amid some nasty fighting with his old school, West Virginia, and then the Wolverines’ longest consecutive bowl string in college football is broken. Texas didn’t want that.

Give Texas credit for seeing what it had in front of its face and locking him up when it had the chance even though the school has never done this before. Brown, 57, has eight years remaining on his 10-year contract after this season, but don’t bet on him staying as football coach all eight.

Two or three more years are much more likely although it figures to be harder for Mack to walk away than probably even he envisions even if he did say, “I’m not going to be Bobby Bowden or coach (Joe) Paterno.”

Texas is on the cutting edge of this brave, new world of hiring successors not only while the predecessor’s chair is still warm, but he’s in it.

The move does not come without risk. But all gambles do.

If Mack stays too long, does Muschamp get itchy? Or stale? Or do the fans clamor for a change if Mack doesn’t win 10 games some season and isn’t ready to step down?

Word is that head coach-designate Jimbo Fisher is champing at the bit to replace Bobby Bowden at Florida State. But FSU started this trend, one that Purdue, Kentucky and the Seattle Seahawks have both co-opted with head coaches in residence.

More such moves are likely.

If Mack had announced his retirement at the end of this season, what options would Dodds have had? Georgia’s Mark Richt. No guarantees there after the season his preseason No. 1 Bulldogs have had. Boise State’s hot Chris Petersen. Maybe too young to handle this pressure cauldron. Butch Davis. Frosty personality.

So who if not Muschamp?

No, Major Applewhite is just too young at 30. Muschamp‘s more proven. But the Major would make a great offensive coordinator if Greg Davis stepped down at the same time at Mack. But who knows if Davis would be ready? He’s a coaching lifer.

Muschamp‘s ascension conveys to fans and recruit s that Texas values what it has now as one of the elite programs in the country and wants to maintain. This smart, bold move should bring coaching stability, sustained recruiting and possibly expanded recruiting into the Southeast and a continued framework for success. Who’d have thought Dodds would be a bigger maverick than McCain?

No one knows if it will be a seamless transition, but it’s the smart way to go. Muschamp gets on-the-job training. He was even asked if he knew Mack didn’t have all this gray hair when he arrived from North Carolina 11 years ago.

Good, because Muschamp knows what he’s getting into, just as Texas knows what it’s got.