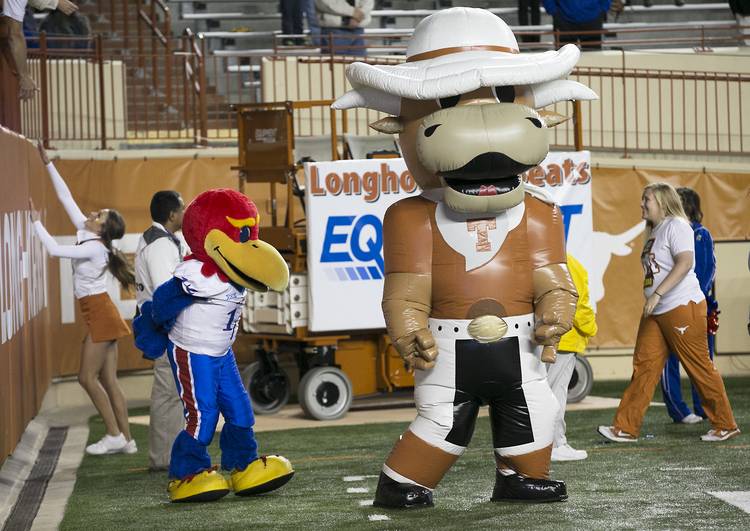 Those were the sentiments of an entire nation of Texas fans who were close to suffering through what would have been the most unforgivable loss of the Mack Brown era.

Would’ve been worse than three 60-something beatdowns at the hands of Oklahoma.

Would’ve been worse than Harrell-to-Crabtree in Lubbock, back in 2008.

Would’ve been worse than the night Colt went down against Alabama.

Would’ve been worse than the UCLA and Iowa State humblings of 2010.

And it would’ve even been worse than the loss in Dallas three weeks ago that cost Big Tex his life.

This was, after all, 1-6 Kansas, which had lost 16 in a row against FBS opponents and was playing in front of a half-empty stadium of fans who cheered the loudest when a Jayhawks basketball recruit was shown on the Jumbotron. A loss in Lawrence would have been unforgivable .

Kansas, a three-touchdown underdog, was oh-so-close to pushing Mack Brown a step closer to the executioner’s chair, but that huge telephone on the wall rang loudly just as Ol’ Sparky was getting warmed up. It was a classic stay of execution, college football style.

You don’t come back from a loss at Kansas. Thankfully, Case McCoy extracted himself from that bothersome sideline headset and summoned up enough magic to probably cool the seat in Mack’s plush Austin office just a bit.

McCoy subbed for a brutally ineffective David Ash, benefited from a dropped interception by Kansas corner Greg Brown, then got quickly reacquainted with Jaxon Shipley, Mike Davis and D.J. Grant, all in one quarter.

His fourth-and-6 toss to Shipley, and that 1-yard play-action touchdown pass to Grant in the final seconds, ultimately saved his head coach from the most embarrassing loss of his career. And that’s saying something. He’s had a few.

Texas returned to the scene of what Lawrence locals still call the Robbery of 2004 and escaped once again with a win, but the feeling was different. The thrilling 27-23 win in 2004 preserved an opportunity for a program on the rise to reach its first BCS bowl game. Eight years later, on the same field, a narrow escape may have saved Brown’s job.

Texas 21, Kansas 17. Sad as it sounds, the only thing worse than a loss to the 2012 Jayhawks is a last-second win over the 2012 Jayhawks. Listening to Mack after the game reminded me of a washing machine that’s in its final cycle. This thing is spinning so fast, you wonder if it might just explode at any second.

On Saturday, Mack was in full spin.

“You all (the media) always talk about losses. I don’t, ” Brown said. “What I thought about was it’s so similar to 2004, and the 2004 team ended up in the Rose Bowl. It was Vince Young throwing the ball to Tony Jeffery back then, and Case McCoy throwing it to (Grant) this time.”

Case McCoy is no Vince, but let’s give him props for displaying the clutch gene that obviously runs in his family.

And congratulations to Texas for becoming bowl-eligible with its sixth win, though there was a a time in this program’s recent history when reaching six wins was expected without talking much about it.

Those days of easy wins are gone, and Mack knows it. When I asked him if he was surprised to be in such a dogfight against such a bad team, he responded “No.”

I then informed him that Texas was installed as a 19-point favorite by Vegas oddsmakers at the beginning of the week.

The real truth is in the perception of this Texas program, not only by its fan base, the media and its opponents, but by its own coach. Surely Brown knows he’s coaching the most unimpressive 6-2 team in college football.

Moving forward, Texas won’t be expected to win in Lubbock or Manhattan. TCU and Iowa State will come to Austin fully expecting to win. The road will be much tougher than spending the cold afternoon in Lawrence, and the Longhorns could finish the season with four straight losses.