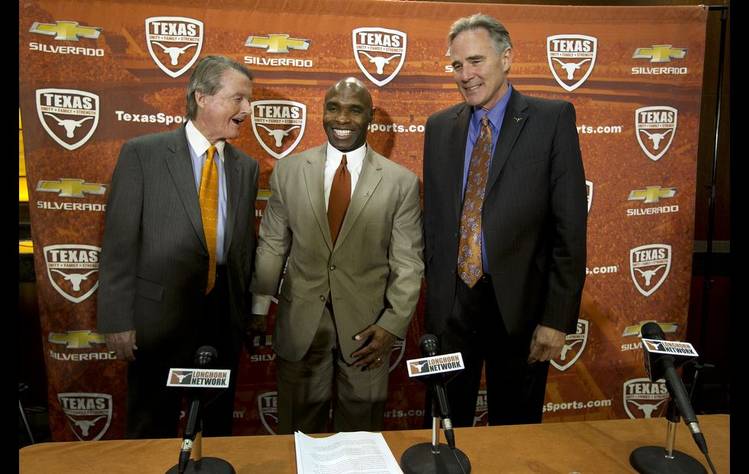 There was a time not long ago when I didn’t think Texas would ever hire a black man to lead its football team.

There was also a time when I never bought into any notion that a black man could be elected president of the United States.

Wrong on both counts.

“There’s always going to be a first, ” Strong said.

Now, for those who are already upset because you’re once again reading about the significance of Texas hiring its first black head football coach, please be advised that it’s a really big deal in the black community, particularly among black alums who played football at Texas. I’ve spoken to quite a few over the past few days, and, to a man, they are ecstatic.

I grew up in Texas and recall elders who didn’t always have kind things to say about the state university that failed to land great black stars like Temple’s Joe Greene and Beaumont’s Bubba Smith. Some of those same people are smiling today, including my 77-year-old father, who happens to be a huge Mack Brown fan.

Strong’s arrival is huge for football reasons, but also for cultural reasons that should not be overlooked or ignored.

“It’s an historic day for the city of Austin, ” Mayor Pro Tem Sheryl Cole, the first black woman ever elected to the Austin City Council, told me Monday. “The university is a crown jewel of the city, and it means so much for our national reputation to hire such a qualified, diverse individual as the head coach.”

Some are uncomfortable with this kind of conversation and will carelessly paint a racial discussion as a racist discussion. Don’t misinterpret the message here. As a black man who grew up watching Texas football, I see nothing wrong with black people being happy that Texas hired a black coach. Many of the same people who took joy in the news also faithfully supported the 28 white coaches that came before Strong. So please allow them the opportunity to celebrate a landmark day for Texas football.

THERE was no sign of new special adviser to the president Mack Brown at Monday’s presser, but it was good to see former coach Fred Akers among the attendees. Akers and Strong have a lot in common, most notably the fact that they both replaced a legendary coach who won a national championship. Akers endorsed the hire and said he was impressed with Strong, calling him a “first-class guy.”

“There’s something about freshness in every part of life, ” he said. “No one should have to do something forever. I was the head coach for 10 years here, and I wish I had been a little fresher after seven years.”

Something tells me it will take a lot less than seven years to determine whether Strong was the right hire to replace Mack.

STRONG might lose Louisville defensive coordinator Vance Bedford, a former UT defensive back who is hoping to land the job Strong just vacated. Bedford reportedly interviewed for the position Monday.

If Bedford gets the gig, it could improve the odds of a holdover from Brown’s staff catching on with Strong, who understands that his recruiting bread will be buttered by the athletes in this state. He has just over a week to make these decisions, and I won’t be surprised to see secondary coach Duane Akina, defensive ends coach Oscar Giles or tight ends coach Bruce Chambers back in 2014. Those guys know these streets, after all.

MONDAY’S events weren’t all met with giggles and grins, especially in the city Strong just left. Louisville cornerback Andrew Johnson apparently watched the presser and took to his @Lockdown_15 Twitter account to give his take. “Looking at this Coach Strong interview & all I can do is shake my head. He ain’t real but… WE STILL BALL.” Johnson then went as far as to say Strong told “us not to worry about nothing because he ain’t going nowhere.”

It’s the nature of the business. Coaches can sell themselves to the highest bidders while the athletes often must sit out a year if they transfer. It’s something college football must fix because the players have to deal with the fallout when the person they believed would be there leaves.