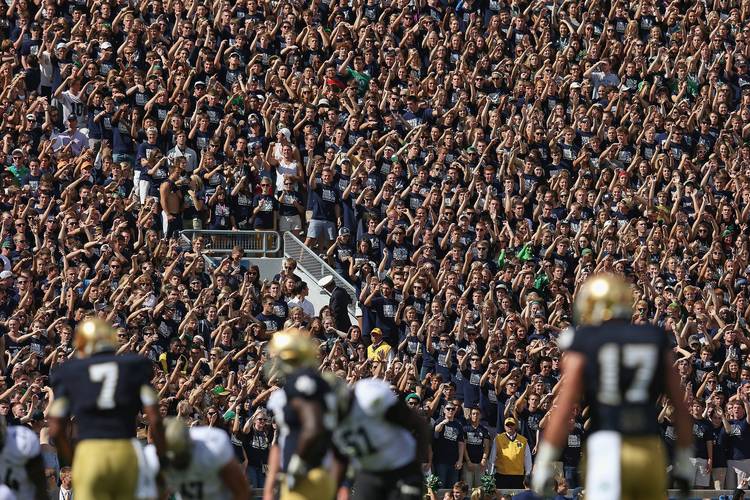 Notre Dame Stadium can be an intimidating experience for any team, but especially one that’s starting six freshmen in a season opener like Texas will. GETTY IMAGES

The visiting team will not participate in a walk-through at Notre Dame on Friday.

The only walking will come when they emerge from the tunnel for pregame a day later.

Charlie Strong believes a roster filled with inexperienced players will best benefit from keeping its distance from the beehive that will start to form on the South Bend campus Friday. To that end, he is driving home realistic points to players who have never experienced a season opener of this magnitude.

He’s sure to remind them that neither Rudy, Paul Hornung nor Knute Rockne will figure into Saturday’s result. Touchdown Jesus will be visible from the sideline, but won’t be spotted in either end zone.

More than 80,000 fans will be there screaming anything anti-Texas they can think of with a few hundred Horns Downs sprinkled in, but they will be outside the sidelines.

In other words, it’s a football game. Nothing more. Nothing less. Strong even went as far as to remind players that the football field at Notre Dame Stadium is the same length and width as the one at DKR. All we’re missing is Gene Hackman holding a tape measure.

Truth be told, if Strong had his druthers, the Horns would arrive in the Hoosier state 10 minutes before kickoff, all warmed up and ready to go.

With six freshmen pegged to start — and that doesn’t even include backup quarterback Jerrod Heard, who will see action behind Tyrone Swoopes — Strong is taking the sensible approach. The last thing he wants is for his newbies to walk onto campus Friday for a walk-through and get caught up in the all the buzz that surrounds a typical Notre Dame home weekend.

The campus will be nuts Friday, with a massive pep rally for thousands of Golden Domers in the South Quad at the Knute Rockne Memorial at 5:45 local time. Given the history between these two traditional powers, it’ll be electric there, especially since it’s their first meeting since 1996 and the first time ever in a season opener.

Imagine the scene if a contingent of burnt orange-wearing Longhorns strode through during a raucous pep rally. Not that anything would happen, but Strong is smart enough to know that fewer distractions will add up to a better focus for his double-digit underdog Longhorns.

“(There’s) so much going on on that campus, and I didn’t want them to be placed in that environment,” Strong said. “Then you hear a lot of chatter going back and forth because I don’t want our guys chattering with their fans and hearing all that. So the best thing sometimes is to walk into a ballpark.”

It’s easy to get caught up in all of the mystique, even though some of these players have never heard of Tim Brown, Rocket Ismail or even the great Joe Montana. Plus the logistics aren’t visitor-friendly. To have a walk-through, the Horns would have to depart Austin earlier on Friday and be fitted into a tight scheduling window. All of that with Irish fans everywhere.

Now that we know their first stadium experience will be pregame, this presents an opportunity for the seniors to provide some needed leadership because it’s certainly the biggest atmosphere the Horns will walk into through their first five games. Players like Malik Jefferson, John Burt, Connor Williams, Patrick Vahe, Edwin Freeman, John Bonney and Heard have never played in a college game, and will understandably be getting the butterflies in the locker room and during pre-game warmups.

Last season’s seniors came under fire for their inability to fully reach the younger players. This is the first real test for the Class of 2016.

“As a senior, the young guys are looking up to you,” running back Johnathan Gray said. “You have to go in, tune out the crowd and understand why you’re here.”

So Strong has a great game plan to eliminate distractions and his senior leaders understand the importance of keeping the rookies focused against a Notre Dame team that’s already smelling blood.

Huge test. The Horns aren’t expected to win, but the manner in which they handle their weekend at South Bend will tell us a lot about this team.

Vince proved many (ahem, me) wrong

Bohls: You want crazy predictions? Here’s 40 for the Longhorns