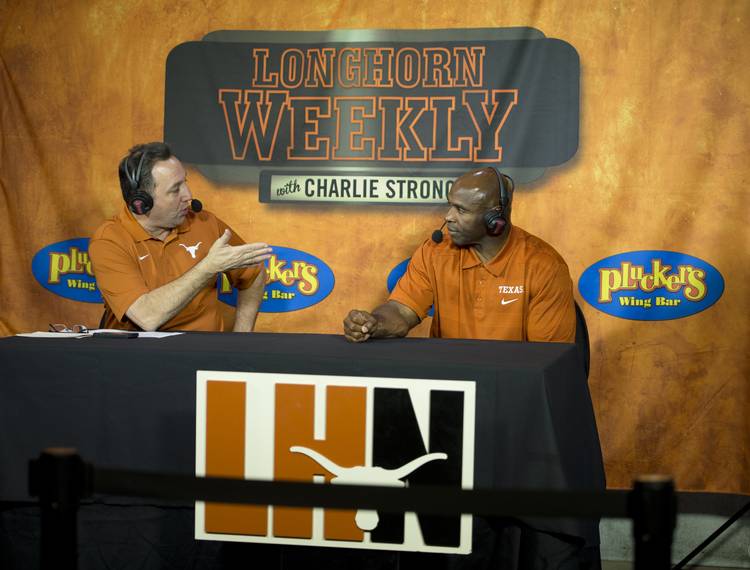 Texas officials really want to get the word out that Saturday’s season opener against Notre Dame will be on a different Austin radio station. Six of them, in fact. Eight, actually, if you speak Spanish.

If Tyrone Swoopes throws an interception against Notre Dame, change the station. He might score on another.

That’s right. UT football will be on eight different Austin radio stations this fall as part of the new broadcasting agreement with Austin Radio Network. The flagship station is 104.9 The Horn, an FM signal that serves as the anchor for football, men’s basketball and other top events.

ARN won the broadcast rights away from iHeartMedia (formerly known as Clear Channel) by signing a seven-year deal worth $600,000 annually, according to multiple sources.

ARN owners Jason Nassour, Eric Raines and Bob Cole are on the hook for about $1 million annually when factoring in all the broadcast-related expenses.

IHeartMedia also paid $600,000 in rights fees, according to a copy of the previous UT radio contract obtained by the American-Statesman through an open records request. Two sources said iHeartMedia lowered its bid in the new negotiations, thereby giving ARN an opening.

“Nothing has changed in terms of the planning or execution of the broadcast. It’s all identical,” said longtime play-by-play announcer Craig Way. “From our perspective, nothing we really do is that different.”

This may come as a surprise, but having UT football broadcasting on eight over-the-air radio stations isn’t the most intriguing aspect of this deal.

Cole, a well-known Austin radio personality, pitched UT officials on the idea of streaming games over the Internet. That means getting UT sports directly on your smartphone.

During contract negotiations, UT women’s athletic director Chris Plonsky told Cole she always remembered what Ron Rogers said about the strength of a radio signal: “Christine, Bubba can hear the game in his deer blind on Saturday,” the KVET general manager told her in 1995 when KVET won the rights away from powerhouse KLBJ.

Cole said he went to a meeting this summer with Plonsky and men’s athletic director Steve Patterson. “I held up my cellphone and said, ‘Here’s the truth, Chris. Bubba don’t take a radio to the deer blind anymore. He uses this,’” Cole said.

It’s not the future, it’s the now

Edison and Triton Digital research found that 53 percent of monthly radio listeners across America listen via online streaming. That’s an estimated 143 million people, and the number is only growing. That just blows my mind.

Why worry about spotty FM or AM signals when the broadcast comes in crystal clear on your phone?

Full disclosure: I don’t listen to over-the-air radio anymore. Haven’t for awhile. Both sports stations in town have access via apps. Apple Music, with its iPhone integration, has won me away from Pandora and Spotify. All of it comes through my car speakers via Bluetooth.

“It would be fair to say we were looking to go to the next level,” said Steve Hank, Chief Revenue Officer for UT athletics. “Where we’re headed with the development of our digital access and what we’re going to be doing, it’s going to be really cool.”

A specialized UT radio app is already on the drawing board. For now, ARN gets its chance to show off its patchwork signal strength. Or listen online anywhere in the world. That’ll come in handy in Shanghai, China, this November with men’s hoops.

“This isn’t the future,” Cole said of UT sports via online streaming. “This is the now.”

What about Craig Way?

Once iHeartMedia lost the UT radio broadcasting rights, it stood to reason that Way would leave 1300 The Zone for 104.9 The Horn. That hasn’t happened, and Way doesn’t appear to be moving anytime soon.

Asked specifically if he was moving his afternoon show, Way said, “I’m planning on doing the Longhorn games, and the plan right now is to continue as a contracted employee of iHeartMedia to continue doing my show.”

UT officials were upfront about their desire to keep Way on Longhorns broadcasts. Attorneys worked up the proper paperwork for Way to appear on another station on game days. Way said at no point did IMG try to stop him from doing games broadcast on The Horn.

IHeartMedia has financial motivation to keep Way under contract and well paid for years. Advertisers pay thousands of dollars to have the UT play-by-play broadcaster read ads on the air. That money would also go to The Horn if Way moves across town.

Here is a list of the radio stations that carry UT football games. Live streaming can also be heard through the Univeristy of Texas app or the UT flagship station, 104.9 The Horn. Game broadcasts are also available on Sirius Ch. 117, XM Ch. 202, and Sirius/XM Internet Ch. 969.

Bohls: You want crazy predictions? Here’s 40 for the Longhorns

Bohls: If this thing isn’t fixed, could only the Strong survive?