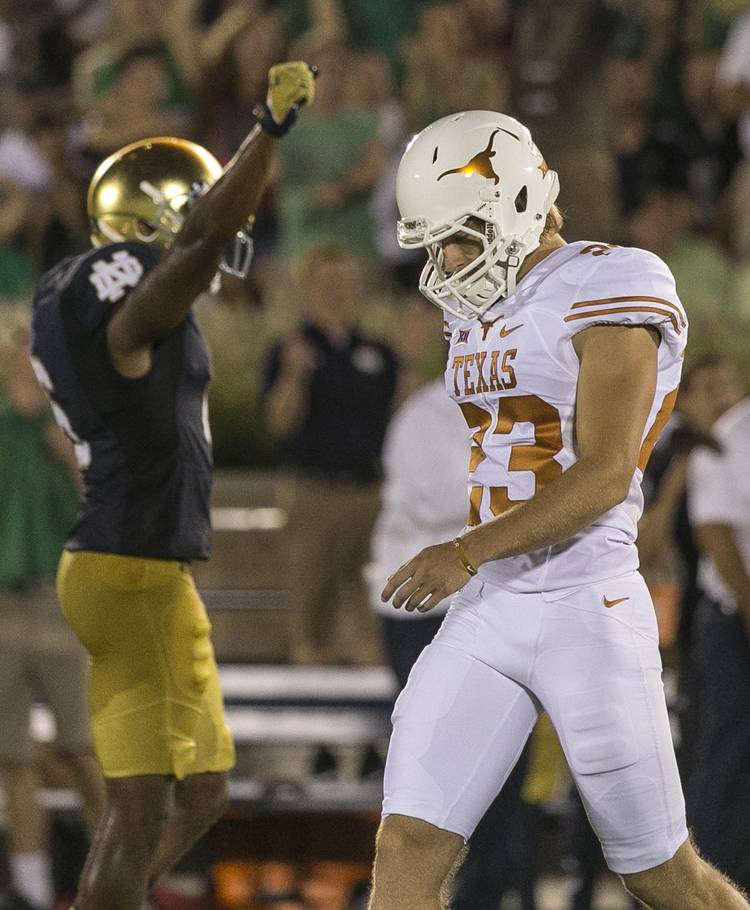 SOUTH BEND, Ind. — The refrain coming out of Texas’ summer camp was consistent the entire month of August.

The Longhorns were showing progress. They were stronger, smarter, more physical. They’d learned from their mistakes of 2014 and were intent upon not repeating them. The quarterback had won over his team. This promised to be one of the most athletic freshman classes in recent memory.

Barely 15 minutes into the new season, they rang hollow.

By that time, Notre Dame had fashioned a 14-0 lead and, but for a false start, might have gone ahead by three touchdowns. It was academic. The early dominance by the 11th-ranked Irish never stopped as Texas fell and fell hard, dropping a humiliating 38-3 game for its second-most lopsided loss in a season-opener in school history and its worst since 1988.

All that was left were the excuses. And those were as lame as the Longhorns’ play before a sold-out Notre Dame Stadium, which included maybe 10,000 totally disheartened and stunned Texas fans.

Charlie Strong talked about protecting the quarterback better, but short of a witness protection program and sending Tyrone Swoopes to Bemidji, Minn., that seems to be a lost cause. Swoopes spoke of a new offense, although Saturday night’s painfully resembled the one that dredged up a pathetic 59 yards in the bowl game loss to Arkansas. Johnathan Gray, who may already be in that relocation program with only three carries in the first half and just eight for the game for 40 yards, talked about fixing “little, minor, detailed stuff.”

You want to know how thorough a beating this was? Texas lost by 35 and didn’t commit a turnover.

This one was a total mismatch and could be boiled down to this: A tougher, more physical Notre Dame imposed its will on Texas and dominated both lines of scrimmage completely and without interruption. Texas ended the night with just 163 yards of offense, 48 of which came on one play, a terrific catch by freshman wideout John Burt.

Malik Zaire, a sophomore with one college start (or 11 fewer than Swoopes had in his career) jump-started his Heisman campaign with a near-perfect outing. The first lefty starter in Notre Dame history sliced and diced a bewildered Longhorns secondary for 313 yards and three scores before leaving after just seven plays into the fourth quarter. Late in the game, his quarterback rating was a jaw-dropping 251.1, which I didn’t even think was legal.

Swoopes, whose personal record sinks to 5-8 as a starter with only two wins over winning teams, completed just over a third of his 22 passes and never had time to collect his thoughts or connect with anyone other than Daje Johnson, who had six of Texas’ eight completions.

It’s all so confounding. Texas’ talent isn’t this bad.

“We are a better football team than what we showed,” a distraught, somber Strong said.

So prove it, Charlie. Quickly.

For the first time in his 14-game tenure, the notion occurs that Strong just might not be equipped to get this thing on track. The program’s clearly broken after yet another demoralizing defeat on top of the two embarrassments against TCU and Arkansas to mercifully end last season — three Texas games, 20 total points — and who knows if Strong can fix it.

Sometimes a program has to hit rock bottom, and hopefully Texas has. But there are no guarantees of that. You wonder if the Longhorns, picked to finish fifth in the Big 12, have slumped to the eighth best team in their own state behind Baylor, TCU, Texas A&M, Houston, Rice, UTSA and Baylor’s second team.

Will the offensive line ever be any good? That’s a head-scratcher. Should Strong start every freshman on his roster right now? Hey, the more the merrier. Will play-caller Shawn Watson keep his job past September? Does he deserve to, after refusing to play the more athletic Jerrod Heard for more than four plays the entire game and forgetting Gray is his workhorse back? Not at this rate.

What Texas needs is some answers. And fast.

Strong does have some options, whether it’s changing quarterbacks or linemen or coordinators. And he’ll start feeling the heat if there are any more debacles this lopsided in 2015. He’s a good man who stands for old-fashioned, honorable values and he’s a good coach, but he’s got to start coaching ’em up better.

Few if any expected double-digit wins, but everyone was looking for progress. Even incrementally. But it was posed here a month ago that this 2015 team could be actually worse than last year’s after six defensive playmakers, a leading running back and the top two receivers had left. And that seems possible if not likely after a 6-7 debut.

The competition will get a little softer with non-Power 5 opponent Rice and Cal’s Pac 12-worst defense coming up next. But they will be followed by Oklahoma State, TCU and Oklahoma, which should give everyone in burnt orange pause. You just hope it doesn’t get any worse than Saturday night’s bludgeoning.

Texas and Notre Dame hadn’t met on a football field in about 20 years. Strong won’t be too excited about seeing them again in 12 months, especially since 13 of the Irish starters have eligibility remaining beyond this season.

When I asked Strong if he worries that the program is going backward, he said confidently, “We’re not going backward. It’s early in the season. We just have to somehow get the thing moving forward.”

He set his jaw when he said it. After taking it badly on the chin.

Golden: Nine months and one embarrassing loss later, nothing has changed