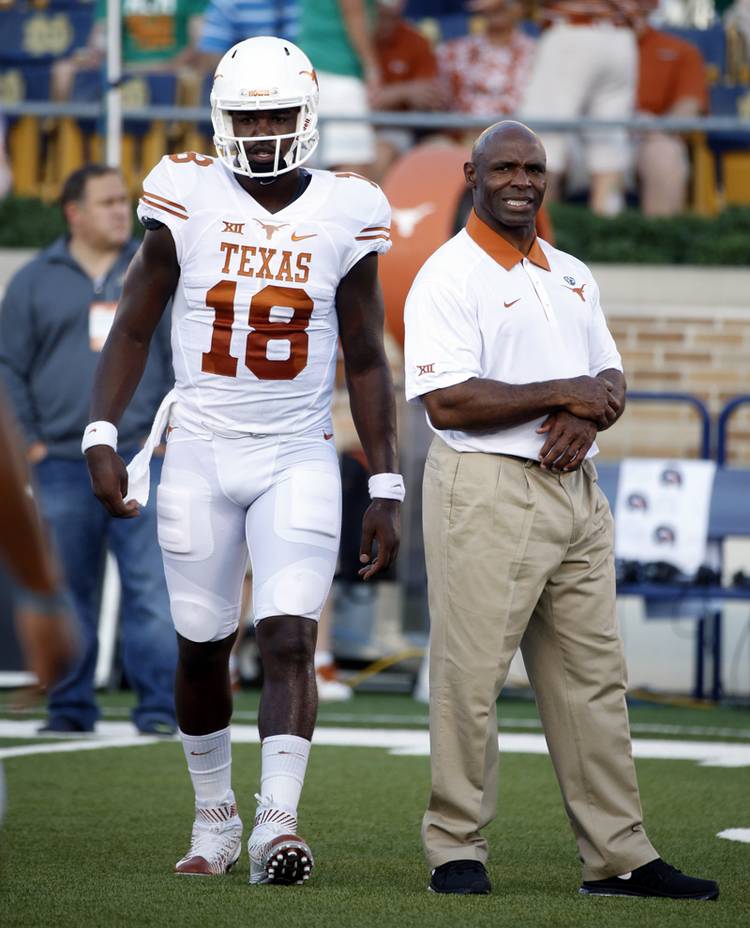 SOUTH BEND, Ind. — Tyrone Swoopes was asked Monday to compare the 2014 offense with the one he captained during summer camp.

“Nothing has changed,” he said.

Turns out he was right.

Touchdown Jesus had nothing in common with this punch-drunk offense Saturday night. Texas players were spotted in the end zone during pregame warmups. I hope they milked the visit for all it was worth.

For those of you who are buying into the it’s-just-the-first-game-and-there’s-no-need-to-panic belief, think again. There isn’t a light that will magically flash, turning this moribund group into a team capable of competing with a Baylor, TCU, or Oklahoma.

At best, they will figure out that Jerrod Heard is a better option at quarterback because of his ability to elude pressure that will come from all angles moving forward. Maybe Joe Wickline’s offensive line will arise from its season-opening slumber and start throwing some people around. Maybe play-caller Shawn Watson will figure out that running back Johnathan Gray needs more than one touch in the first 11 minutes of a college football game.

The defense? Malik Jefferson was great in his college debut, but the unit was shredded by a Notre Dame quarterback who looked more like Joe Montana than Malik Zaire.

In all fairness, you can’t pin this all on Swoopes even if he appears to be the same player from last season. Dude had zero time to pass the ball. The one time he got to set his feet, he connected with freshman John Burt on a 48-yard pass play. That one completion represented about 30 percent of Texas’ offensive output for the evening.

Swoopes spent the rest of the night running for his life behind a swiss-cheese outfit that was helpless against unrelenting pressure from future first-round pick Jaylon Smith and Co. Left tackle Connor Williams played like a freshman — no surprise, given the environment — and his more experienced mates didn’t fare much better.

It was a disastrous end to what began as a wonderful weekend.

Texas fans arrived in the Midwest in big numbers and crashed the Chicago Cubs’ 14-5 win over the Arizona Diamondbacks on Friday. The hospitable folks at Wrigley Field even provided the services of the stadium organ player, who belted out an rousing rendition of “The Eyes of Texas” to the delight of Longhorns fans who spent the whole game chanting “Texas Fight” between innings.

But the numbers — they don’t lie:

Ten seasons ago, the Horns gave up 38 points in their final game, but that was a three-point win over USC in the national championship game. These days, you get the feeling a team can feel good about its chances against the Horns if it scores just half that.

Thankfully, Watson had no excuses for the game plan or the anemic offense. What could he say? He didn’t place all the blame on his offensive line, but that was where most of it should go.

When asked if his job will be on the line if this continues, Watson said, “I have to keep working for the kids. That’s why I do what I do. I do it for the kids. I’m out there because I love the game. I’m going to do my very best to make sure we help the kids get this thing right.”

They could start by getting it right against a Rice team that’s probably thinking it can beat Texas after scoring 56 on Saturday, albeit against an FCS opponent.

After Saturday night’s display, even a loss to Rice is possible.

Bohls: If this thing isn’t fixed, could only the Strong survive?