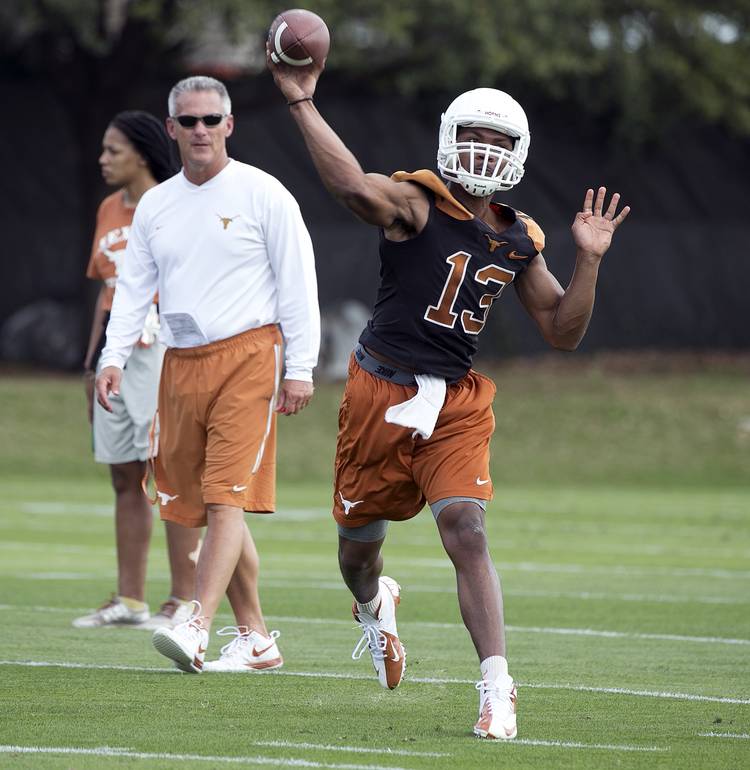 Shawn Watson has been put on notice.

Joe Wickline has been put on notice.

Tyrone Swoopes has been put on notice.

So has Texas’ entire offensive line and defensive secondary.

From the sound of it Monday, if you were one of the 79 players on the travel squad for the debacle that was the season-opening 38-3 embarrassment against Notre Dame or any of the nine assistants and presumably the equipment manager, you’ve been put on notice, too.

Heck, Charlie Strong put himself on notice. As he should.

Here’s hoping the grieving, angry Texas fan base that we think will still show up for Saturday’s home opener against Rice, expecting big changes and maybe even a touchdown, will notice as well.

Watson’s in severe trouble, maybe irreversible if this newfangled, up-tempo offense and his grand experiment of Tyrone Swoopes as the next Teddy Bridgewater completely fails. Wickline, the offensive line coach and kinda offensive coordinator, could be in just as much hot water as well. In between court appearances, of course. There are so many in hot water over at Bellmont that Steve Patterson just ordered a dozen backup water heaters.

Even though I wasn’t allowed to ask a single question at Strong’s press conference, the head coach graciously invited me afterward to ask one while in line for chicken wings. So I asked if Wickline’s job is safe.

Strong chuckled and said, “I’m not sure mine’s safe.”

Steve Patterson’s job could also be in jeopardy because he’s ticked off the entire Longhorn world, which is still royally miffed that its relatively new athletic director raised ticket prices for this product. If this mediocrity keeps up — and is there any real reason to think it might not, after the Surrender in South Bend — new Texas President Gregory Fenves might be more than curious why his AD guaranteed all five years of Strong’s $25 million contract. I know the prez goes by Gregory L. Fenves, but really, haven’t there been enough Ls already?

Strong had better get it right, and soon. And he knows it.

Otherwise, Red McCombs’ initial misgivings about Mack Brown’s successor and his suggestions that Strong was more qualified to be a coordinator or a position coach just might bear a ring of truth.

Strong is, to my knowledge, a head coach who is totally genuine as well as universally respected and liked by all of us in the media. But that won’t get him a W on any Saturday. However, he’s wisely preaching accountability, and he’s not above changing coaches in mid-season. Mid-season? Hey, he might do it next weekend if his football team doesn’t turn it around and run Rice. There is precedent.

In October 2011, Strong fired his offensive coordinator after just four games in his second season at Louisville. He let Mike Sanford go because the Cardinals were averaging fewer than 19 points a game in a 2-2 start and ranked 105th nationally in scoring.

Texas, under Watson, has barely scored 20 points total in its last three games.

At Louisville, Strong promoted Watson, his quarterbacks coach, to play-caller that season. And Watson did a marvelous job in grooming Bridgewater into an NFL quarterback. Watson, when he was at Nebraska, was once lured to Alabama by Nick Saban, but was talked out of leaving the Huskers by AD Tom Osborne. Watson didn’t go dumb overnight, but his offense clearly isn’t working.

Now Watson is joined at the hip with Swoopes. But is he ready to gamble his own future on a quarterback who’s 5-8 as a starter and has neither swagger nor game?

“We can’t go through the season with another bad offense,” Strong admitted Monday.

Strong also announced that he is in “the evaluation process” for his team and his entire staff. After just six plays at Notre Dame, backup quarterback Jerrod Heard might even make his first career start. Everyone’s on alert. Especially Watson and Wickline, one of whom we presume is the real offensive coordinator here. Changes are afoot.

When it was suggested to Strong that he might have considered being a little bolder and more daring against the Irish, the head coach laughed and said, “We only had the ball for 52 plays. Did you want me to run a double-reverse pass?”

That would have at least been entertaining. Even if incomplete.

Watson is under fire. Wickline has pretty much skated away from media criticism, partly because we know who really calls the plays even if a Stillwater, Okla. courtroom has to decipher it in January and partly because we hardly ever are allowed to talk to him. An American-Statesman request to interview the line coach this week was denied by the school’s sports information staff. So I guess Joe’s hiding.

Charlie’s not hiding. But then there’s nowhere to go.

Golden: Nine months and one embarrassing loss later, nothing has changed