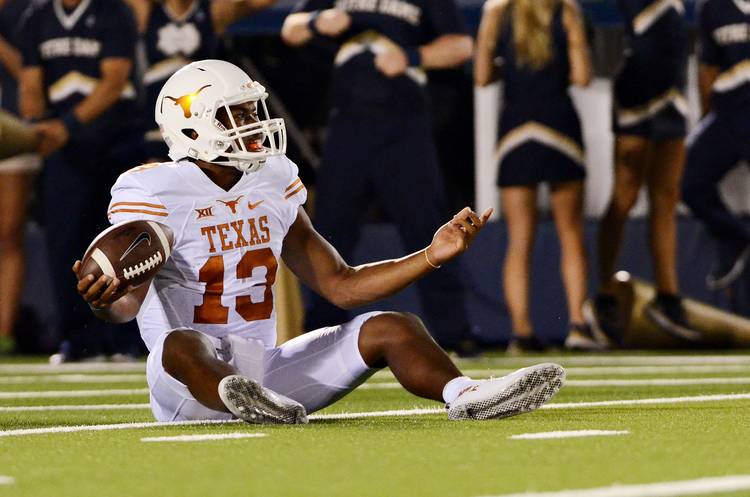 It wasn’t a bombshell, but it needed to be said. The quarterback competition is back on at Texas.

A still steamed Charlie Strong said he will decide later this week if he will stay with Tyrone Swoopes as the starter or turn the offense over to Jerrod Heard.

Well, that’s a start of a good thing. The next step should be to name Heard the starter, even if quarterbacks coach and play-caller Shawn Watson insists on keeping Swoopes in there.

Anyone who has read this space over the past year knows my thoughts on Swoopes. I just don’t view him as a difference maker or someone capable of taking this program to the lofty heights of days past. Heard has an upside that must be sped up given the massacre that occurred in South Bend.

Here’s the problem with Watson. He’s stuck in the past. He helped turn Teddy Bridgewater into a first-round draft pick and is using that success in hopes of doing the same with Swoopes.

Swoopes isn’t Bridgewater. Watson knows as much, but also understands that Swoopes represents his coaching comfort level. He’s completely comfortable coaching a drop-back passing type over someone like Heard, whose biggest plays will come because of his feet, not his arm.

I believe Watson would much rather coach Swoopes in a West Coast attack than Heard in a spread attack similar to what Vince Young ran in his day. It’s not Watson’s cup of tea, but it’s the cup of tea that would make this a better offense.

Strong didn’t exactly give Watson a glowing endorsement — “I know Shawn’s the offensive coordinator,” he said — which should be taken to mean he’s getting an on-the-job evaluation. And if Strong decides to make a move during the season and remove Watson, the best thing would be to name Heard the starter and let Jay Norvell, who has coached in spread offenses for years, call the plays.

Heard may not be polished, but he has the type of athleticism this offense needs. Plus he brings something that Swoopes won’t be able to give this fan base: HOPE.

If Strong decides to pull the trigger on Heard, Watson’s days could be numbered.

They may be numbered even if he doesn’t.

Did you catch what Jordan Spieth tweeted in the midst of the Notre Dame beatdown?

“Texas’ offense looking about as useful as my last four rounds.”

Golf’s newest superstar didn’t mince words, which is a refreshing change from the PC garbage you hear from some alumni.

Another tweet that caught my eye came from Ryan Palmer, who played cornerback here and was a freshman on the 2005 national championship team:

“I remember when we went 10-3 in back to back seasons. People thought it was the end of the world…lol don’t take winning for granted. It’s hard.”

Palmer was blessed that he came along at the height of Mack Brown’s success. The teams he played went 45-7 and 4-0 in bowl games. It’s OK to say those were the good old days. It does seem long ago.

Texas’ 2015 NFL draft crop wasn’t huge, but fruit sprouted from an unexpected source. Tight end Geoff Swaim made the Dallas Cowboys, making him the surprise of this camp. The ‘Boys love his ability as a blocker, which should come as no surprise since he caught only 13 passes in two college seasons.

Not to worry. Dallas has Jason Witten and Gavin Escobar to handle that.

Of the 10 Longhorns from last season who were in NFL camps, Swaim was one of four to make a 53-man roster. The others are defensive tackle Malcom Brown (New England), cornerback Quandre Diggs (Detroit), and linebacker Jordan Hicks (Philadelphia).

And for those of you who are pooh-poohing the idea of being on a practice squad, be advised that these guys are pulling in a minimum of $112,200 for 17 weeks of work.

Not a bad part-time gig.

Eyes on Texas: Time for freshmen to take over Longhorns