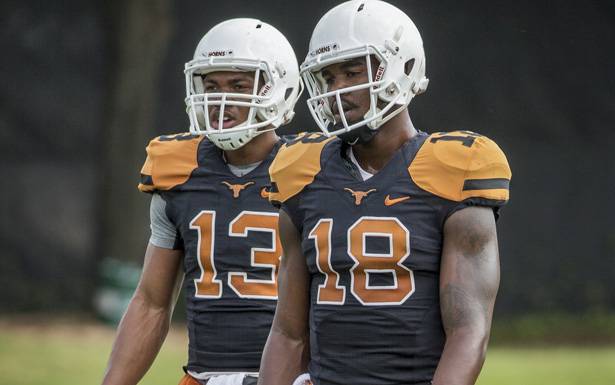 At least it should.

Why stop at the Shawn Watson demotion, Chuck? You just made Jay Norvell your play caller. Give him a shiny new toy to make things really interesting.

Start Heard. Give the redshirt freshman the ball. Tell him to go out and make a play or 12.

Let him do his thing in front of 90,000 fans who have all wondered at one time or another over the last week if their team will ever win another football game.

Let him do it at the helm of an offense that has failed to score more than one touchdown in three straight games, a fact that is exacerbated by Texas making just one trip into the red zone over the same span.

Better yet, it would be a real help to a defense that hasn’t produced a takeaway since last Thanksgiving.

Notre Dame was an abomination. Shoot, Michael Spinks was more competitive against Mike Tyson in 91 seconds than the Horns were in three hours against Notre Dame. Charlie Strong isn’t looking to land a knockout against Rice, just a few well-placed body shots to let the Owls know a 16-point underdog isn’t coming into DKR to spring the upset.

Here’s something you don’t hear everyday: The Rice game is a must-win for Texas.

The Owls haven’t beaten the Horns in  21 years and if they break that skid, Texas will officially be in free-fall with no parachute.

These are troubling times, particularly on offense, and  Strong, a self-admitted student of defense, has vowed to stick his head in more offensive meetings. His rep is on the line and that’s why he decided he could no longer co-sign on Watson’s ineffective play calls.

“We can’t go through another season with a bad offense,”  Strong said. “No, that cannot happen.”

Before Strong turned the play-calling reigns over to Norvell, the biggest mystery entering Saturday’s game was whether the Rice MOB would show up and whether athletic director Steve Patterson would charge them an extra $200 per insult.

Now it’s whether Strong will stick with Tyrone Swoopes as the starter or roll with Heard.

Heard should start, no question.

A misty-eyed Strong told us Tuesday that did what he had to do in the best interest of the program. He knows the fans’ feelings are pretty raw given the embarrassing events of last week. The hope here is that Watson is still engaged as the quarterbacks coach and not already checking the want ads.

Heard still needs guidance, even if Watson is more comfortable coaching a quarterback in a West Coast offense. Norvell doesn’t have to be a genius to make this offense work. Just make the kid comfortable out there and put him in place to make plays with his legs.

“Norvell is a smart coach,” Johnathan Gray said. “He knows what he is doing, otherwise coach Strong would not have given him this duty. The players like him. We rally around whoever is calling the plays because we got to run them and execute. It does not matter who is calling them, and we’ve got to roll with Norvell right now.”

Heard told us in the spring that he lives for playing in front of big crowds. Loves the spotlight. That’s why you let Heard start in front a packed house. Ask him to give us some of that old Denton Guyer play-making ability.

Swoopes is a nice kid who has represented the program well, but this is no time to think about feelings. Strong has to go all the way with this thing. Putting his best two runners — Gray and Heard — in the same backfield increases the chances of good things happening without having to rely on an unimpressive offensive line that struggled in pass protection against a really good Notre Dame defense.

Norvell didn’t call the plays during his years seasons on Bob Stoops’ staff at Oklahoma, but he has  been around the game for a long time and understands the principles of a spread offense, dating back to his days as a receivers coach with a young Peyton Manning and the Indianapolis Colts.

Let’s see what they can do.

Eyes on Texas: Time for freshmen to take over Longhorns

Golden: Texas is in the win column, but fixes remain