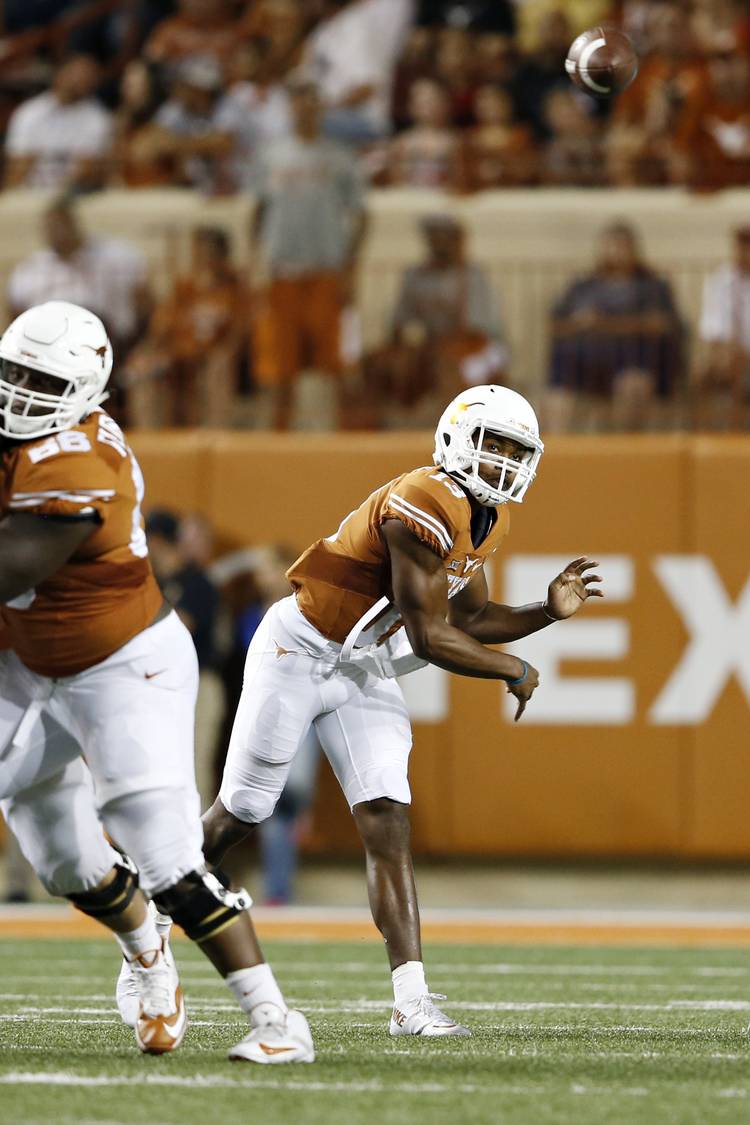 The kid’s got juice.

That’s undeniable. It was obvious to everyone as soon as Texas’ third offensive play of the night, when he bolted through the Rice defense for 50 yards although a penalty negated a bunch of it.

And he didn’t slow down much after that.

Jerrod Heard made the first start of his college career and made it count. So much so that it’s safe to say Texas has found its quarterback, and it’s been looking since Heard was a ninth-grader. Now Texas should have found him last season as a change of pace or at the very least last week against Notre Dame, when he only got to play five snaps.

But that’s in the past. Saturday was all about moving forward — the Texas offense, which had been barely moving at all, and perhaps the direction of Charlie Strong’s program although offensively stout Cal will have something to say about that next weekend.

By first-start standards, though, Heard was spectacular.

Told in the locker room just before kickoff that he was replacing Tyrone Swoopes in the lineup, the unperturbed redshirt freshman threw for two touchdowns. He ran for just a hair under 100 yards. He didn’t have a fumble. Didn’t throw an interception. Not sure he even sweated.

Heck, he had so much energy that after he scrambled for 18 yards in the Rice red zone late in the third quarter, he did three impromptu pushups just for the heck of it.

The Owls didn’t have all that easy a time tracking down the former two-time state champ from Denton Guyer. He averaged 9.6 yards a carry on his 10 rushes. He just didn’t get his hands on the ball all that often.

Why, if the Longhorns’ defense would have quit hogging the field and gone to the sidelines every now and then, Texas might have had more than 38 snaps, and there’s no telling the damage Heard might have inflicted.

Thirty-eight? Really? That was the first half total, right?

No, that was for the game as a pretty good Rice team played keep-away with a whopping 96 plays when Texas wasn’t playing takeaway by forcing five turnovers. But Heard made the most of those 38 plays, squeezing out enough big plays on sweet throws to Armanti Foreman and John Burt to jump-start a prehistoric offense into modern-day football when a desperate bunch of Longhorns — and Longhorns coaches — needed it most.

With his legs, with his cool, with his strut, Heard  gave Texas another dimension.

But mostly he gave ’em a win.

Remember those? It’s been a minute since the Longhorns last walked off the field as winners, beating Oklahoma State last Nov. 15.

Don’t even think about suggesting this was just Rice. Remember, Rice was playing just Texas. These same Owls won eight games last year, including a bowl game, and last week beat the Seahawks. No, not those Seahawks, the Wagner FCS Seahawks. But David Bailiff’s got himself a very respectable team. As for Strong, he’s got a 1-1 team with a pulse and a chance because of a suddenly explosive offense that will be built around big plays that Heard can trigger.

“We had to have his spark,” Strong said.

“We felt like, hey, let’s give Jerrod a chance,” the coach added. “He’s one of those guys that’s going to jump out there with a lot of juice. He’s got so much energy to him.”

Strong announced Heard will remain the starting quarterback, but what other choice does he have? Texas might not have beaten Rice if Swoopes had played the majority of the game. Fortunately, Strong made that call when he demoted play-caller Shawn Watson, who has been force-feeding Swoopes down Strong’s throat when he should have given the dynamic Heard a legitimate fighting chance at the job.

Watson’s credibility took another big hit with Heard’s display of quicks and athleticism. Oh, and his arm looked pretty strong on the strike to Burt. He would have made a terrific change of pace last season, and his mobility is even more key, given how suspect this offensive line still is. Heard can make plays out of nothing, a skill only special quarterbacks possess, and now Strong doesn’t have to worry that he himself has nothing to rely upon.

New play-caller Jay Norvell, who hadn’t sent in a play since he did so at UCLA in 2007, fared well in his debut. The receivers coach-turned-coordinator put the offense through its paces for about 50 plays at the Denius bubble at mid-morning Saturday, then turned it loose hours later for a critical win. Even Strong noticed that his team had been playing “uptight” until Saturday.

That all changed under the lights when an electric quarterback created some flow to the offense and, yes, put some juice into the attack.

Asked if he’d added much to the playbook, Norvell shook his head and said, “No, we actually deleted. We did less. And we’ll probably do less next time. But a lot of the time, less is more.”

And it’s refreshing that now we’ll see even more of him.

Golden: Texas is in the win column, but fixes remain