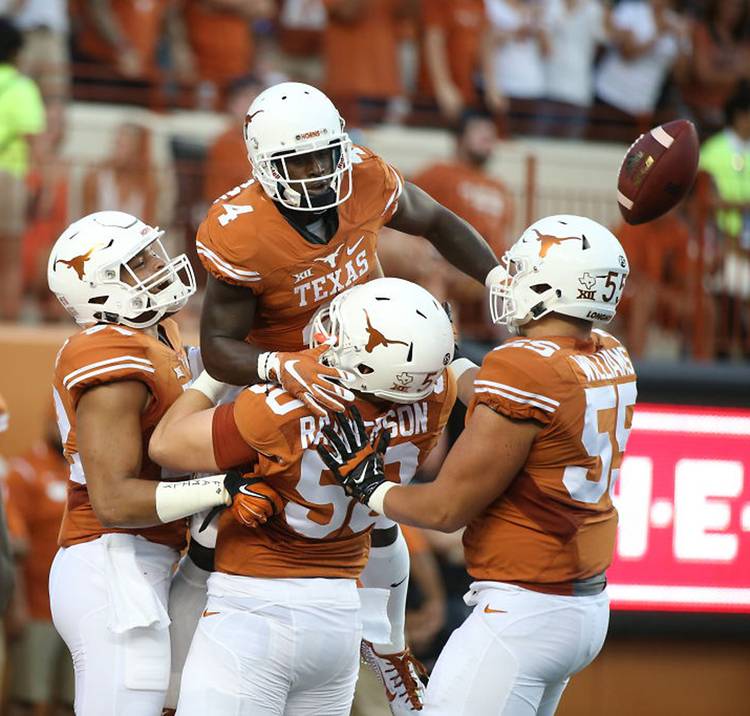 So the Texas Longhorns aren’t going 0-12 after all.

The sky and ground didn’t meet in the middle of DKR Saturday night.

Jerrod Heard is this team’s quarterback of the present and the future, and the Horns are in the win column. To their credit, they didn’t over-dramatize a win over the Rice Owls.

Freshman linebacker Malik Jefferson sat down on a stool in the interview room following the season’s first win.

And talk he did.

“I had a rough one,” he began. “The quarterback was kind of slippery. I missed a lot of tackles. I have to prepare myself better this week and get back to work.”

This coming from a guy who finished the game with nine tackles, a sack and a 26-yard fumble recovery for his first career touchdown in the 42-28 win.

He gets it, and so do his defensive comrades. They get that they must play better to finish better than .500. They get that a much better effort on defense will be needed to beat Cal next week.

As you come down from the afterglow of this first win, the pictures don’t lie. They reveal a defense that was sloppy in its tackling and pursuit angles against an opponent it should have dominated.

“We have to get up the field on third down,” Strong said. “We allowed them to keep some drives alive. We just have to think about improving.”

Owls quarterback Driphus Jackson jock-strapped the future freshman All-American Jefferson at least several times and proved difficult to corral when plays broke down. He was the catalyst for Rice converting 14 of 21 third-down opportunities to keep this game close.

At one point in the first half, Jefferson broke through the line and appeared to be right on schedule for a kill shot and sack, but Jackson smartly stepped aside. Still, Jackson served up a pair of interceptions and the Horns did enough to keep an 0-2 start to the season from occurring in front of a fan base that was desperate for a win, any win.

The Horns got a nice little mark on the left side of the ledger, but Strong — defensive guru that he is — has to be concerned that Texas was spanked up front by a smaller offensive line and was often pushed back on short yardage plays. The Owls ran 96 plays, the most against Texas in the Strong era since Iowa State took 93 snaps in Texas’ 48-45 win last year.

At one point in the second half, Strong turned to defensive coordinator Vance Bedford and said, “I bet we’ve missed 20 tackles or more.”

Most of them were against Driphus — love that name — who was often able to avoid the first wave of rushers to make plays on intermediate throws.

“God Almighty, what did we miss, about 10 sacks?” Strong asked reporters. “And that’s where you get your negative yardage.”

I haven’t even mentioned that Rice totaled 462 yards, only 65 fewer that Notre Dame put on Texas last week. And 228 of those came on the ground.

“They ran it right at us,” said defensive tackle Hassan Ridgeway.”That’s a statement to us saying that we can’t stop it.”

Strong has a real job ahead of him, but he will do it in a better humor than was the case in the days following the lost weekend in South Bend.

That’s the beauty of getting that first win. Strong can really get after this defense in film study and pound it into his players’ heads that they will be facing an opponent far more formidable than Rice.

The Cal Bears aren’t the Aaron Rodgers/Marshawn Lynch Cal Bears from a decade ago, but they are much more versatile than Rice. Junior quarterback Jared Goff will get some Heisman notice and a secondary that finally showed a pulse after a Notre Dame no-show will have plenty on its plate this time next week.

All things considered, it’s a win and Texas needed it.

Now the Horns must build upon this new confidence. They will need it in spades to beat Cal.

Golden: It’s Heard’s turn, so let’s see what he can do

Bohls: Heard brought the juice, and it was much needed