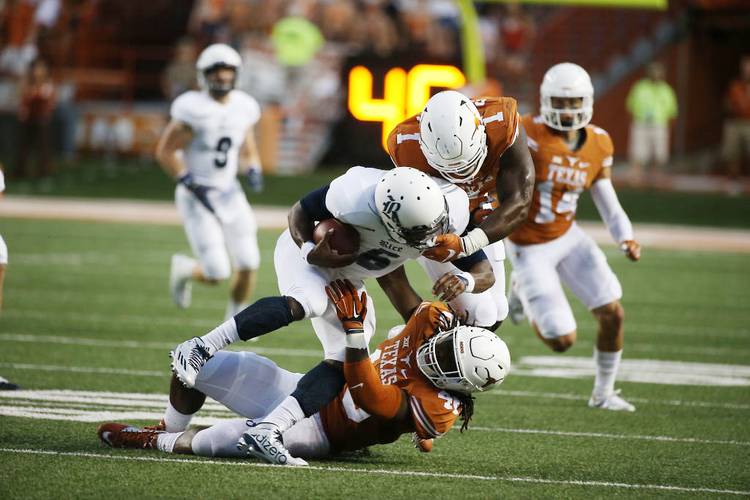 Charlie Strong gushed all month long about his defensive line.

And he’s not really a gusher.

The Texas football coach is practicing more restraint these days. But then what choice does he have? The game tapes don’t lie. Neither do folks’ eyeballs.

The Longhorns’ defensive front, thought to be the strength of the team all summer long, has been a miserable failure in the first two games. And as a result, so has the defense overall.

Notre Dame could have named the score in Week One, striking through the air and on the ground. Rice pummeled Texas in Week 2, running up the gut all night long and hogging the ball for 96 plays. Now comes Cal and its high-powered offense paced by junior Jared Goff who may be — gulp — the next Aaron Rodgers.

Goff’s projected as a first-round draft choice next spring if he leaves school early. He’s already thrown for 630 yards and six touchdowns.

Strong just raved about his defensive linemen in August. Said he had a slew of them, so many that he’d be able to rotate them all game and keep them fresh for the fourth quarter. He could start junior Hassan Ridgeway and Desmond Jackson at tackle, plug in Paul Boyette Jr. and Poona Ford to give them a rest and come back with Chris Nelson and Alex Norman when they got tired.

He had defensive linemen coming out of his ears. Or so he thought.

Asked where those players are, he said, “I still have ‘em. I just got to get ‘em to play. They’re still sitting there.”

Or they’re going backwards. He can’t really sit any of them because none is impersonating Malcom Brown up front. Rice ran at will as Texas got pushed off the line with regularity all night long. Texas offensive tackle Kent Perkins said the defensive might be suffering from communication problems. “I think they can be a great defensive line.”

Strong suggested on Monday that his defense missed eight easy quarterback sacks. He didn’t want to begin to count the missed tackles.

So how did he grade his defense?

“I’m a defensive coach,” Strong said. “Can’t give ‘em a grade. There’s so much room for improvement. They were attacking us right down the middle. We weren’t very good the other night. We’re missing tackles. To win, you have to play great defense.”

And Texas really isn’t all that close to great.

Not when you rank 105th nationally in scoring defense, 110th in stopping the run, 114th in total defense and, oh yeah, dead last in third-down conversion defense. When a defense allows its first two opponents to convert 22 of 35 third downs, that’s about as inexcusable as it gets. You’d think an opposing running back would slip short for the first down marker once in a while.

So what is the problem? For one, Texas’ defensive ends are barely showing up. Anyone seen senior end Shiro Davis? Have any of the tackles made a memorable stop? Is Jackson anywhere close to 100 percent?

The Longhorns played a lot of three-man fronts with linebackers crashing from outside, and Strong said Texas might widen those up front to help ‘em “jet upfield.” They definitely need to try something new if they’re going to stop a Cal quarterback who loves to throw the ball downfield but likes to remain in the pocket.

Maybe it will help that Cal’s Air Raid offense is more akin to those Texas faces on a regular basis in the Big 12. The Longhorns led all Big 12 teams in pass defense a year ago, but Quandre Diggs and the currently injured Mykkele Thompson left for the NFL.

Quite simply, Strong said his defense is not winning one-on-one blocks. It’s called beating the man in front of you.

Texas needs somebody, anybody to find some mean and use that intensity on the field. Someone besides Jefferson. Someone like Roy Miller, who regularly chewed out teammates that weren’t holding up their end. Someone like Diggs, who last year said he didn’t see enough “dogs” out on the field with him.

Is anybody mean on this defense?

“I mean … I would guess so,” Jackson said. “I don’t really know how to answer that.”

Exactly. You’d like to think he could rattle off three or four names.

“We’re nowhere near where we should be,” he said.

He knows it. The players know it. And Cal knows it.

Bohls: Heard brought the juice, and it was much needed