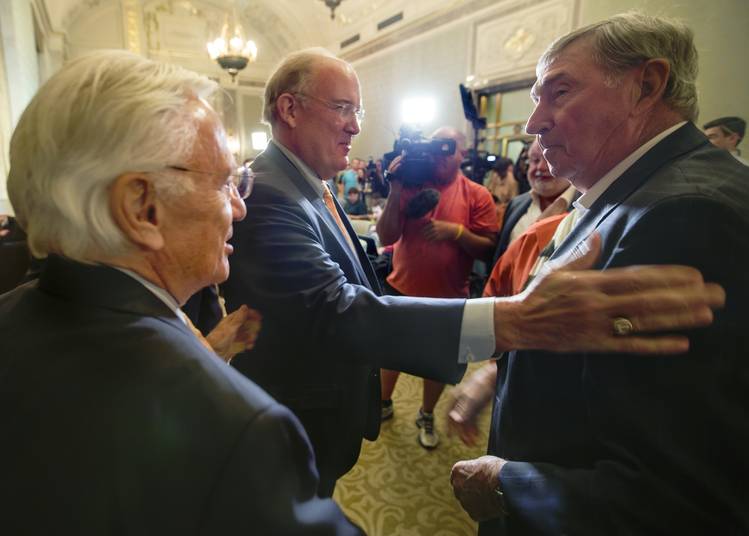 The first week, Texas got blown out by Notre Dame.

The second week, both co-offensive coordinators got demoted.

The third week, the athletic director got fired.

Steve Patterson was out the door almost as fast he walked through it. And in comes a bright, polished, friendly, well-educated, heavily Longhorn-rooted guy as his replacement. What’s not to like?

Or is he the interim?

As Perrin said,”You know, I’m not an English major, but the word ‘interim,’ to me, has a real meaning.”

Interim might also mean he’s Texas’ sitting AD until he proves he can do the job and wants the job and Texas doesn’t want to stomach going through another tough, grueling search. Both Perrin and UT President Gregory L. Fenves should be prime candidates for “Dancing With the Stars” the way they two-stepped around the subject of whether Perrin might eventually become the permanent AD.

Interim might mean temporary, but words can be shaped to mean whatever you want them to mean. For instance, Fenves has insisted Patterson resigned on Tuesday. But that timing fell apart when Perrin was asked when he was first approached about the new gig. He chuckled and spilled the beans, saying it was on Labor Day nine days ago. “I was at home about to fire up the grill,” he cracked. At least he’s honest.

You can turn the grill off now, Mike. You’re in the frying pan.

And it won’t shock me if he stays there. I’m betting Fenves and Perrin are at least open to the possibility.

Perrin makes a lot of sense. He’s one of them, a diehard Longhorn who is so burnt orange-blooded that when he heard about Shaka Smart’s hiring, he turned around on I-10 and sped back to Austin as fast as he could for the basketball coach’s press conference.

Maybe he’ll bumble through his one interim year. Or maybe he’ll be a shooting star who pries millions out of Nike, gets a new basketball arena built on campus, inspires Charlie Strong to a winning season and walks on Lady Bird Lake.

First of all, Perrin’s got to get used to the job. Fenves is doing the same, joking Wednesday that he couldn’t believe he’s been president for just three months. Fenves is having to go through on-the-job training as, well, president of the football team. Maybe one of these days, he’ll get around to some of the other duties other school presidents do.

So far Fenves has been tied up removing a statue and a Steve.

Perrin’s already off to a good start. He spoke of healing. He noticed how the fans sent a message “with their feet,” when more than 20,000 stayed away from Royal-Memorial Stadium last Saturday. He said he’s not going full-speed ahead “to undo things.” He said his top priority is to visit with fans, coaches, ex-students, donors. He’s ready to smooth over hurt feelings and calm the choppy waters.

And trust me, they’re as choppy as they can get.

When Chris Plonsky was asked if the university’s image has taken a huge hit in these turbulent days, the Texas women’s athletic director said, “I think it’s par for the course.”

Big-time university. Big-time problems. And hopefully big victories at some point in the future.

He’s gotten a lot of nice endorsements from Fenves and others.

DeLoss Dodds, who held down the AD job for a minute, was on hand Wednesday and said of Perrin, “He’s been a friend for 34 years. This was a great decision. He’s good.”

Texas regent Steve Hicks described Perrin as “solid, smart and bleeds orange. And as big an orangeblood as he is, his wife may be bigger.”

In fact, Mike and Melinda are the ultimate Longhorn power couple. The two met on campus and have had their hands in all types of Texas activities, boards and groups. All their kids go to UT. Mike, who played defensive end and linebacker for Darrell Royal, rarely takes off his T ring.

Perrin gets it. And maybe gets the job too. Permanently.

Golden: Texas needs an AD; why not Mack Brown?

Golden: Perrin represents a return to normalcy for Texas