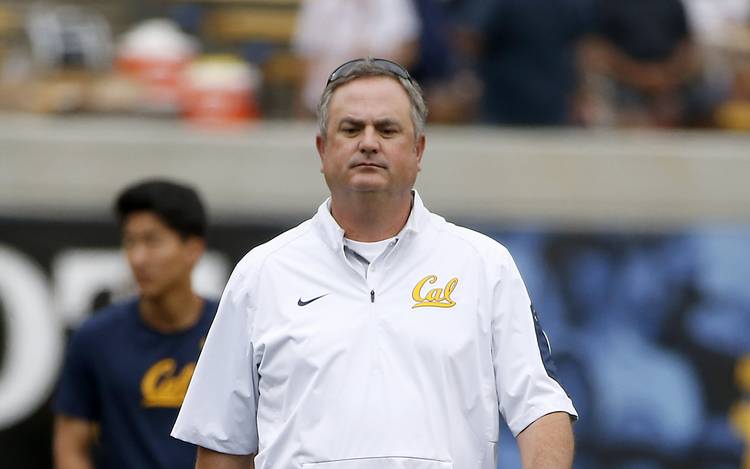 Sonny Dykes was born in Midland.

He played baseball at Lubbock Coronado and Texas Tech.

He coached at Monahans and Richardson Pearce and Navarro.

His father coached as an assistant under Darrell Royal at Texas.

He lived in places like Big Spring and Alice and so many spots that, by his count, he’s had 20 different homes.

So how does a good ‘ol Texas boy who worshipped Roger Staubach and all things Dallas Cowboys wind up at liberal, brainy Cal-Berkeley, which is known more for libraries than linebackers?

Easy. He’s a helluva coach with a terrific family tree.

“He had some credentials that were pretty good,” dad Spike Dykes said.

Cal grew weary of the once highly successful Jeff Tedford and the football team’s rapidly dipping graduation rates and landed an up-and-coming, personable coach from Louisiana Tech with a Hal Mumme-styled offensive mind and strong roots in a home state that’s sort of known for football.

Heck, even Sonny Dykes’ wife’s grandfather, Joe Golding, was a legendary high school coach at Wichita Falls, where he won four state titles. Dykes knows Texas. He assigns five Cal coaches to recruit the Lone Star state and has seven Texans on his roster, including star running back Daniel Lasco.

Now the school’s just waiting for a record to justify its faith in him and extend his five-year contract.

The Bears called upon Dykes to fix a troubled program that had careened off the road under Tedford, who had nine winning seasons with five bowl victories but slipped to 15-22 over his final three seasons. Dykes has gradually, methodically gotten the Golden Bears back on their feet, a 1-11 debut in 2013 notwithstanding with only a win over Portland State — “and we were lucky to win that one,” he cracked.

On Saturday, the son of the hilarious and highly respected Spike Dykes brings his offensively explosive Cal team to the same stadium where his dad once brought him into the Texas locker room on the night in December 1976 when Royal coached his last game.

And something is at the No. 1 ranked public institution in the country, under Dykes’ direction. This is a school made for brainiacs, Cal exes like Apple co-founder Steve Wozniak and Robert Oppenheimer, the father of the atomic bomb. Oh, Cal’s also had its share of football stars like Craig Morton and Chuck Muncie, but some of its best head coaches had more success on the NFL level than they did at college. Heck, Marv Levy never won more than four games in a season at Cal, but somehow took the Buffalo Bills to four Super Bowls.

So maybe the NFL isn’t as tall a task as winning at the lovely place overlooking the San Francisco Bay.

Sonny does differ from Mumme, the spread guru for whom he worked as a GA at Kentucky, and Mike Leach, for whom he was offensive coordinator at Texas Tech. Dykes wants to run the ball more and play a physical brand of ball.

Asked if he gives his son coaching advice, a laughing Spike said, “I give it, but he doesn’t take it. I don’t blame him. I’ve got all the answers but no solutions.”

Sonny won five games a year ago and brings a 2-0 record to Austin on Saturday, but he’s yet to post a victory over a team that ultimately had a winning record. Spike coached for Royal for five seasons, but will be rooting for his kid. “Blood’s thicker than water, but I’m not going to be arrogant about it.”

And what would it mean if Dykes were to land a win at Royal-Memorial Stadium, where his father worked for the legendary Mike Campbell and where Sonny and the neighborhood kids off Bucknell Ave. in northeast Austin would load up in Spike’s car on Sundays, drive to the stadium and play tackle football on the same field where Tommy Nobis and Earl Campbell played?

It’d mean much more than that. It’d be the signature win that his 8-18 program desperately needs to show Cal belongs as a legitimate contender in the Pac-12. He has a strong shot at pulling it off because the Texas defense has been reeling and public support, with 11,000 still unsold tickets, hasn’t yet caught on.

Sonny’s got his own problems. After Tedford’s graduation rates fell to below 50 percent as the lowest in the Pac-12, Cal announced upgrades, including a policy where 40 percent of incoming athletes in all sports must have at least a 3.00 high school GPA. That number will climb to 60 percent in 2016 and 80 percent in 2017.

But Dykes’ 2015 football class already met that 80-percent standard, so he’s on his way. And even though he can’t recruit at least a third of the top 100 players in California who aren’t academically eligible, the ones he does land have a built-in work ethic, a maturity and a lack of discipline issues.

“Obviously we’ve got strong recruiting ties in the South in Louisiana, Alabama and Mississippi,” he said, “and if you’re an academic kid in that part of the country, there are not a lot of options for them. We’ve had the No. 1 public school rating in the country for 23 consecutive years.”

Dykes does need to fix his defense, pile up some more recruits from the South and have a fortunate bounce or two. If that happens, this Southern boy just might make it at liberal, free-thinking Berkeley.

Which raises the point: Is Dykes liberal or conservative?

“You’re not getting a word out of me,” Sonny said. “I know better than that.”

Golden: Perrin represents a return to normalcy for Texas