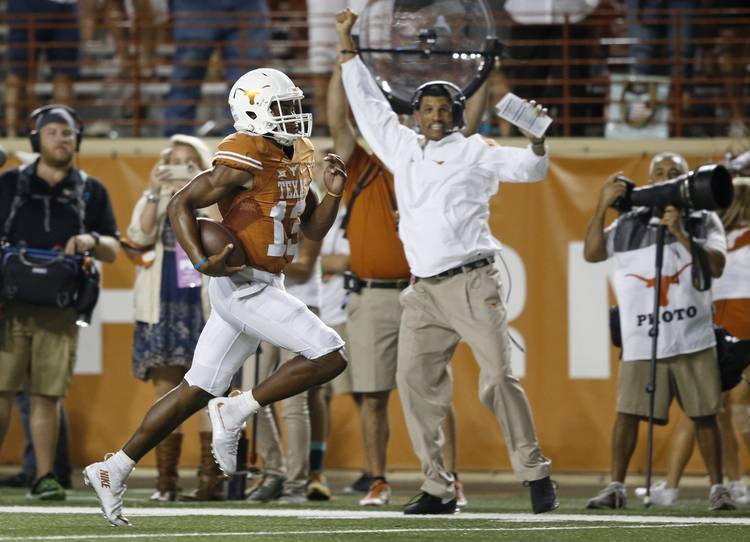 Jerrod Heard gets what it means to be a big-time quarterback.

He isn’t there yet, but count me as one who can’t wait to see him grow up at the position.

The clutch gene isn’t given to all, but the kid has it from top to bottom, from the retro high-top fade reminiscent of Kid from Kid ‘n Play fame down to the sweetest feet in Austin.

It was almost enough to deliver Texas the biggest win of the Charlie Strong era.

It was almost enough to get Texas to a 2-1 record in non-conference for the first time since 2012.

Shoot, it was almost enough to get Strong the signature win that continues to elude him.

Still, the 91,568 that walked out of Royal-Memorial Stadium can rest assured this offense is in good hands (and feet) for the foreseeable future.

Kicker Nick Rose wowed us on YouTube with an 80-yard field goal this summer, but no one was doing backflips after he short-footed the easiest play in college football with the game on the line.

One thing that cannot be denied is the feeling (besides utter heartbreak) in many a gut as the clock struck zero.

That’s been lacking around here in recent years.

But now it’s falling from the sky because of No. 13.

“He went out there and had fun again,” said teammate Malik Jefferson. “He’s showing everybody he wants to lead this team.”

Before Saturday night, 21 different Texas teams had amassed at least 600 yards of total offense in a game. All had won. Until Saturday. The Horns went for 650 in a losing effort.

Heard has the ability at this early stage of his career to raise the levels of those around him. He’s far from a finished product, but for now, the Horns are happy to call him an electrifying weapon with the upside we saw in 2003 from a kid named Vincent Young.

“Jerrod was fabulous,” said offensive play-caller Jay Norvell. “He’s learned so much in a short time. We want people to defend the whole field. It’s really his ability to throw. People have to defend that as well.”

I still can’t help but bang my head in disbelief that former play-caller Shawn Watson (with Strong’s apparent blessing) believed Tyrone Swoopes was ever a better option. The truth is Heard was always elusive, which means he was always capable of doing it with his legs. The offensive staff (including Watson) does deserve credit for his development, but it pains me to think about a season and a spring wasted with Swoopes leading the offense.

Turns out Mack Brown didn’t leave the cupboard bare after all. Heard is a program-changing quarterback who is only going to get better. His school-record 527 yards of total offense topped the 506 set by Young, Texas’ gold standard, at Oklahoma State in 2005.

Heard’s 45-yard touchdown run down the sideline with 71 seconds remaining brought back memories of a time when Texas’ quarterback was always the best player on the field. First Young, then Colt McCoy.

This guy will one day evoke total fear into the hearts of Big 12 defensive coordinators, not because of his potential but because of what he has already done. He showed he can bring back a team from a big deficit and do it with his arm as well as his legs.

Texas fans should be excited. The loss hurts, but one look around the Big 12 should be proof their team is no longer an automatic out against the teams favored to win this league. Oklahoma gave up 38 points to Tulsa on Saturday. TCU gave up 37 to SMU. Lamar scored 31 at Baylor.

The Horns aren’t close to being great, but they are far from what they were this time last year.

And their best player? He’s only going to get better.