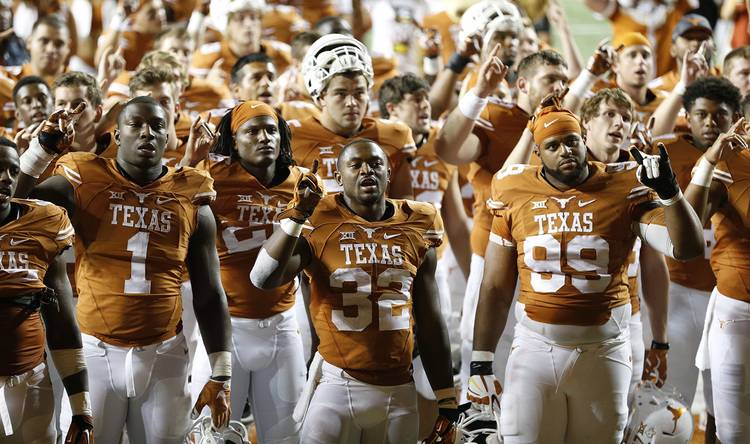 Put a big, ol’, fat asterisk by that. The bigger and fatter, the better. Like an asterisk on steroids.

So what if it was a moral victory? I know historically that even a hushed mention of such would get you run out of Royal-Memorial Stadium, but that was back when championships were the standard around here and trophy cases were stuffed.

Now the goal is to, ahem, make a bowl game.

Pretty modest, huh? Hey, a 1-2 record isn’t pretty. And the 1 wasn’t all that decisive since Rice ran all over Texas.

But the Longhorns have plenty going for them as they enter conference play Saturday. Such as:

Notre Dame, Rice and Cal are a combined 8-1. All three of those will play in bowl games, and it’s conceivable that the Irish and Bears could push for a CFP post-season berth. The Oklahoma States and West Virginias and Baylors in the league, meanwhile, are mopping up on UTSA and Liberty and Lamar. So Texas has been tested.

(2) Explosive offense. Jerrod Heard is all that, and Daje Johnson, John Burt and Armanti Foreman have more than made up for the loss of Marcus Johnson, who’s battling an ankle injury. Longhorn Nation hasn’t been this excited about a quarterback since 2009. He’ll keep Texas in every game. Did you notice how few fans left Royal-Memorial Stadium, even after the Longhorns fell behind by three touchdowns?

(3) Explosive special teams. Johnson and Duke Thomas combined to score and set up touchdowns with great punt returns against Rice, and Cal was so terrified about kicking deep to Johnson that the Bears were pooch-kicking on kickoffs and quick-kicking on fourth-and-shorts. Daje could be the league’s best kick returner since Tyler Lockett.

OK, so Texas has an implosive defense. But even that has a caveat. Six Big 12 teams, including Texas, rank 56th or worse nationally in total defense. Four of them, including Baylor, rank 80th or lower in scoring defense. And Texas’ defense isn’t as bad as Kansas’, and everybody’s giving up points.

But it’s got enough positives that it’s plausible that the Longhorns will be competitive in every game and could even pull off a shocker here or there.

We all know this is an offensive-minded league, and the Longhorns may be well-equipped to challenge the Big 12’s best teams touchdown for touchdown. Jerrod Heard’s magic is that strong, and the defense has to eventually improve some, doesn’t it?

Now Charlie Strong and his players will tell you with a straight face that they’re going to win the Big 12.

“I don’t see any reason why not,” defensive tackle Poona Ford said. “We’re just as capable as anybody else in this conference.”

As it should be.

Personally I can’t see it. I see Texas more as a spoiler, a feisty team that will knock off a TCU, Baylor or Oklahoma but one that’s still way short of consistency with a leaky defense and an unreliable kicker. It’s much more logical to see Texas win six or seven games and playing in a bowl game. More spoiler than spectacular, but it’s highly unlikely anyone runs away with this conference and goes through unscathed.

TCU is losing starters to injury at an alarming rate, and Baylor’s defense has been vulnerable. Oklahoma and Texas Tech are solid with the two biggest non-conference wins over The Conference That Used To Be The SEC against Tennessee and Arkansas, but are hardly invincible. Kansas State’s breaking in a young quarterback. Oklahoma State and West Virginia haven’t played anybody.

The important thing is the team believes it can play with anyone, and it’s desperate for some positive momentum.

“We have enough talent to compete with anybody in the nation,” Johnson said. ” We can’t get down on our ourselves.”

Down? You almost thought the players actually believed they beat Cal, which I think they would have, had Nick Rose gone down main street.

Asked if the Longhorns were good enough to win the conference, Heard, or Lil’ Vince as I call him now, is convinced they are.

“I feel like we are,” the redshirt freshman quarterback said Monday. “I feel like we can turn it on and get it going. It starts with Oklahoma State.”

And could it end with Oklahoma State?

It is big, but Saturday shouldn’t be labeled a must-win game. It’s close, however. Call it a must-play-well game.