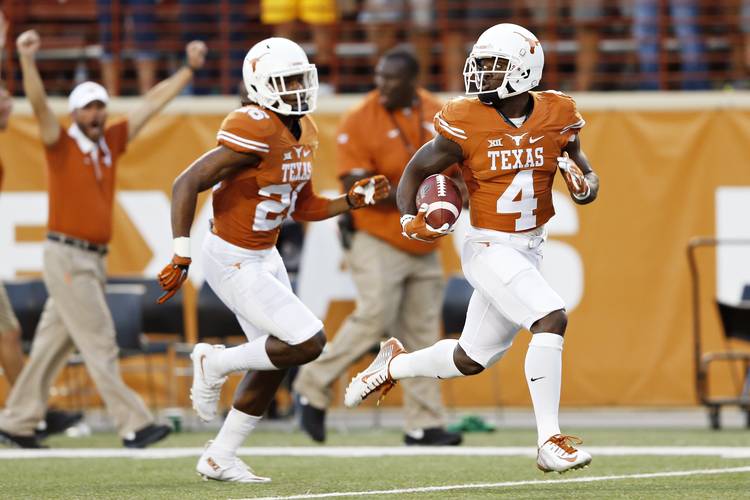 UT wide receiver Daje Johnson takes a look back while running down the field during the game against Rice at Royal-Memorial Stadium on Saturday September 12, 2015. JAY JANNER / AMERICAN-STATESMAN

Daje Johnson has touched the ball 23 times in three games.

That’s not enough. Not nearly enough.

Hopefully Texas has figured out by now that the ball in Johnson’s hands is bad for the opposition.

Johnson has talented offensive teammates, but only one — quarterback Jerrod Heard — is in his class as far as the type of athleticism that drives defensive coordinators nuts.

“He’s a crazy athlete,” Heard said. “We have to get Daje the ball every time. You want him in there making plays.”

Johnson can only hurt opponents one way: With the ball in his hands. Look at it this way — Johnson is averaging 18.1 yards per touch. Great things happen whenever he has the pig.

He needs it more.

If the Texas coaching staff is looking for a blueprint for what Johnson could mean to this offense, it should look no further than Percy Harvin, who terrorized the SEC for three seasons at Florida.

In 2007, Harvin touched the ball 142 times from scrimmage for 1,622 yards in 13 games. That added up to 11 touches per game and 11.4 yards per touch. While I’m not saying Johnson, who has underachieved his first three college seasons, is the next Harvin, there is no reason why Texas shouldn’t give him Harvin-type touches. With defenses gearing up to stop Heard, this is the time to build upon a solid start with the money games coming up.

“I don’t feel like I need a number (of touches) placed on me,” Johnson said. “Whenever I do have that chance to get the ball, I just have to make a play and bring that spark to the team.”

Johnson has the potential to bring a Ramonce Taylor type of skill set to the Horns, who will have to average around 35 points a game to keep up with high-powered offenses like Baylor and TCU in this league. He compares favorably to Taylor, the oft-troubled swingman from Mack Brown’s first two Rose Bowl winning teams.

Taylor is on the short list of the best pure athletes Mack ever recruited, right up there with Vince Young, Jamaal Charles and Roy Williams. He didn’t always get the big touches, partly because of off-the-field issues and partly because he was often on the same field with future pros like Young, Charles, Cedric Benson and Selvin Young.

Johnson doesn’t have the meat hooks for hands that Taylor possessed, but he’s in Taylor’s same athletic department when turned loose in the open field.

After he returned a punt 85 yards for a touchdown against Rice, Johnson was named the Big 12’s special teams player of the week. But his 24.4 yards-per-return average isn’t listed among the conference leaders because you have to average two returns a game to be considered. Thanks to some pretty smart scouting by Cal coach Sonny Dykes, Johnson is averaging 1.6. On the bright side, that 24.4 average is the fifth best in the nation.

Johnson hauled in five catches for 145 yards and carried twice for six yards against Cal, which gave him 151 yards on 11 touches, a robust 13.7 yards per touch.

Charlie Strong said he had hoped to see Johnson get his mitts on the ball in the kicking game, but Dykes had other ideas. The Bears punted five times, but starting punter Cole Leininger got the night off. Quarterback Jared Goff dropped back for four quick punts that came with Texas’ defense, not special teams, on the field and most important, with Johnson standing on the sideline, where he couldn’t hurt the Bears.

Add to that, the Bears also kept it away from him on kickoffs.

“I was thinking that I could just go to the ball once they kicked it off, but they didn’t want to do that,” Johnson said. “We were trying to figure out the signals for deep and for squib and we tried to guess that, but we couldn’t.”

The keepaway tactic worked great for Cal and provided a possible strategy for upcoming Big 12 opponents. Strong doesn’t think so, or does he?

Then he paused and added, “I think they’ll kick it to him.”

Johnson is also figuring out some things off the field after the ill-fated offseason release of a rap single titled “Dealer,” and he wasn’t talking about a guy who works in a casino or on a car lot. The song drew the ire of his head coach and prompted Johnson to take down the Twitter link.

These days, though, the two are in a much better place, even though Strong knocked on wood when complimenting Johnson in a preseason presser. I suggested he knock on wood again, just in case. Strong did.

“I feel like I can talk to him about anything and he can come to me about anything,” Johnson said. “He can ask me about whatever and I will give him the honest truth. I feel like we have a way better connection from when he first got here.”

Johnson has the potential to make this offense even scarier than it appeared at times against Cal.

But not without the ball.

Did Joe Jamail really give up his suite at DKR? ‘That’s BS’