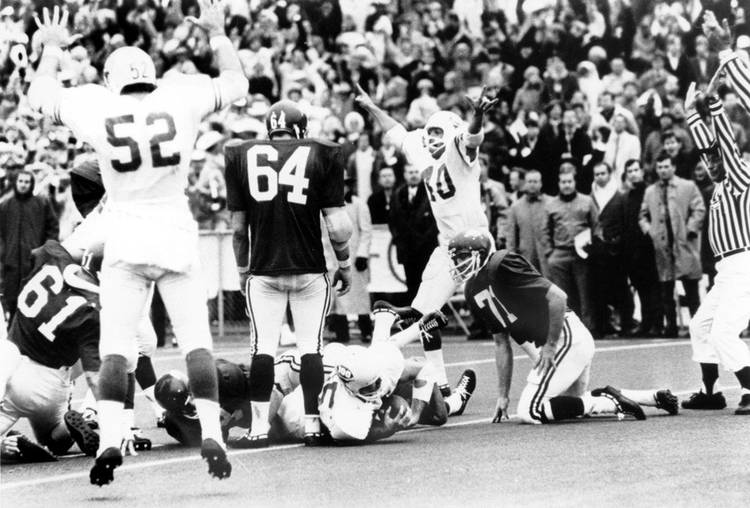 Texas Longhorns, Forrest Weigand (52), and Randy Peschel signal Jim Bertelsen's two yard touch down score that led to the 15-14 win over Arkansas and the National Champioship in 1969. President Nixon attended the game and presented Coach darrell Royal and the Longhorns with the champioship award. (Houston Chronicle file photo)

Don’t look for his name in the Texas record book.

Randy Peschel’s name won’t be there.

Most touchdown receptions in school history? Roy Williams leads with 36. Best he can remember, Peschel had one. And it wasn’t even thrown by a quarterback. It came on a split end reverse pass from Cotton Speyrer his senior year against Texas A&M star Dave Elmendorf.

Most career catches by a Longhorns tight end? David Thomas is on top with 98. Peschel had 40.

Who made the most catches in a single game? That’d be Jordan Shipley, arguably the best receiver in Texas history who had 15 against this week’s opponent, Oklahoma State, in 2008. Peschel thinks he had “one, maybe two” in the 1970 Cotton Bowl game that validated Texas’ second national championship. (He had one for 16 yards.)

Peschel never made All-SWC. He never graced the cover of a magazine. In fact, he’s not prominent anywhere in the Longhorn record books. But his name is on the lips and in the minds of every Texas fan from El Paso to El Campo.

He caught the most famous pass in school history.

When Texas needed it the most against Arkansas in 1969, Peschel caught a 44-yard pass on fourth-and-3 on Right 53 Veer Pass — a call that lives forever alongside Roll Left and Vince Young’s favorite play, “Me on Two” — and set up the game-winning touchdown in the final minutes.

For that as well as a largely unsung but unselfish, hugely productive career in football and baseball, Peschel will be inducted Friday night into the Longhorn Hall of Honor at the Erwin Center. In a move that is sorely overdue — as is the induction of former head coach Fred Akers, an assistant on that 1969 team — Peschel joins other celebrated luminaries from that team like Steve Worster and Bob McKay.

Few were as reliable or sure-handed as Peschel. “Randy was the Jason Witten of his age,” former long-time Longhorns publicist Bill Little said.

Peschel was notified six months ago by former Longhorns star and coach David McWilliams, but even then he thought it was a prank. Fourteen of his teammates and coaches from that Game of the Century have been so honored, but Peschel is still pinching himself over his recognition.

“I’m still in awe,” said Peschel, 66, who works as a residential interim construction lender for an Austin bank. “I’m not sure it’s true yet.”

Some younger fans may not recall the name, but all are aware of the profound impact Peschel had on Longhorns legacy. That over-the-shoulder catch ranks right up there with Young’s touchdown run to beat USC and Tommy Nobis’ goal-line tackle of Joe Namath in the 1965 Orange Bowl. Jack Crain’s long run against Arkansas in 1939 and Noble Doss’ overhead catch versus defending national champ Texas A&M in 1940 resonate the same in Texas’ rich football history.

“Peschel’s catch has to be one of the top four or five plays in Texas history,” said Little, who curiously enough told veteran sportswriter Dan Cook the night before that if the game came down to a pass, Peschel would be the receiver. “What’s interesting is if All-Southwest Conference tight end Deryl Comer hadn’t torn up his knee at the end of 1968 against Tennessee, Randy never would have played.”

Oh, Peschel’s life would have been fine. He would still be celebrating 45 years of marriage to McCallum cutie Sue Wright, would still have had two daughters, Ali and Melissa, and a son, Ran. And he would still be enjoying nine grandchildren even if one of Arkansas’ defensive backs had batted away the long pass.

But he’s glad he had this one huge personal highlight to set up Jim Bertelsen’s 2-yard scoring dive for a 15-14 win in The Big Shootout, completing a perfect regular season.

Texas had tried 53 Veer Pass a couple of times that season, but Street had never even gotten off the pass. Teammate Ted Koy remembers it wasn’t a big part of the game plan, but Peschel had suggested to Akers at halftime that the Razorbacks’ press coverage might allow him to get deep. Royal filed that away, and when Street told Peschel the pass was coming to him but looked at Speyrer in the huddle so as not to tip off Arkansas, the stage was set.

Peschel’s not sure he can remember a better Street pass that settled into his arms. He remembers a Texas cheerleader doing a cartwheel and “someone telling me, “Nice catch, Pasqually.” Street handed out colorful nicknames as deftly as the wishbone quarterback did option pitches.

Without the catch of a lifetime from the undersized tight end from Austin Lanier who began his career as one of seven freshmen quarterbacks in 1966, lives would have been altered forever.

“I didn’t appreciate the magnitude of Randy’s play until the next day when I saw the picture in the paper,” Koy said. “There were six hands going up for the ball. When you digest all the factors, that has to be up there with one of the all-time greatest plays. Without that play, we would have blended into the woodwork and been just an average team.”

There was nothing remotely average about that 1969 team.

Peschel’s historic catch will be chronicled in “My All-American,” the upcoming film of cancer-stricken defensive back Freddie Steinmark. Former Texas quarterback Case McCoy portrayed Arkansas quarterback Bill Montgomery in the movie, but multi-tasked and also stood on a 12-foot ladder and threw probably 100 passes to recreate the high trajectory of Street’s pass to Peschel. Actor and stunt man Eddie Davenport played Peschel, but “he’s about 6-2 and weighs 215. He looks like a real tight end, not like me at all. And he’s a lot better-looking than me.”

Peschel has retold the story of his catch so many times, it’s become a living part of him.

He can remember shaking President Nixon’s hand in the chaotic locker room. He’ll never forget when Royal called him to the front, “grabbed my face and gave me a big ol’ kiss on the cheek.” He can still remember that he and Street were the last ones in the shower, and recalls the wild plane ride home, the frenzied crowd at Mueller Airport that forced the plane to stop short of the tarmac and the party at the Terrace on Congress Avenue.

Peschel remembers it all like it was yesterday, which of course it wasn’t. On Friday night, he’ll regale the audience at the Hall of Honor with the story of how his late father, Calvin, watching the ’69 game at a neighbor’s house, dived on the carpet “to help me make the catch.”

“I know things would be a lot different if this hadn’t happened to me” Peschel said. “I’m sure it’s changed my life for the better. I know it was a big play. As for one of the biggest plays in UT history, it’s not for me to say.”