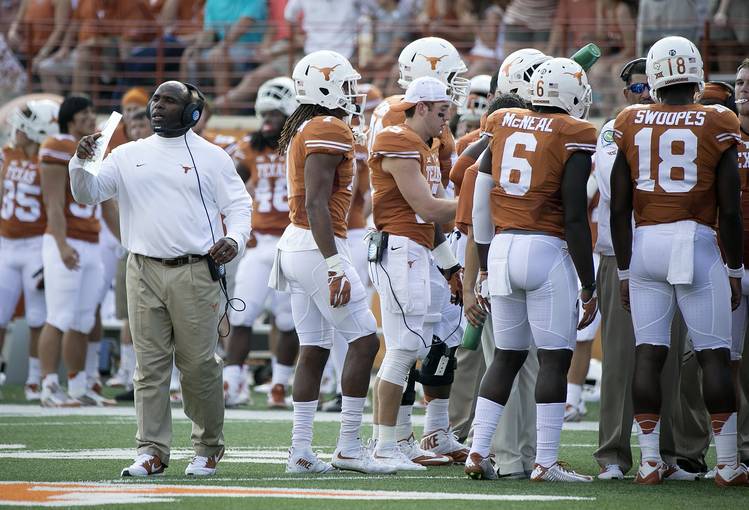 Texas's head coach Charlie Strong with his team against Oklahoma State during the first half at Royal Memorial Stadium on Saturday, September 26, 2015. DEBORAH CANNON / AMERICAN-STATESMAN

For those who insist Texas is a wildly inconsistent football team, put a sock in it.

No team consistently finds more unique ways to lose a football game than these Texas Longhorns. So give them high marks for creativity.

A week after a moral victory, Texas got handed an immoral loss.

As a week ago, the Longhorns again overcame a double-digit deficit although this hole was in the first quarter, and they even led by a field goal in the fourth quarter Saturday. But a sluggish offense behind a harassed Jerrod Heard (seven sacks) and some soul-sucking penalties combined to take the life out the listless Longhorns, who had four consecutive three-and-outs in the fourth quarter and managed only two first downs and 48 yards the entire second half.

You can look that up under ineptitude in Webster’s.

Just when it seemed Texas might have found itself on secure footing and was within a whisker of evening its record, punter Michael Dickson bobbles a snap and gets off a lame, 10-yard, left-footed kick that sets up Oklahoma State at the Texas 18. A run and a penalty later, a 40-yard field goal by Ben Grogan gave the Cowboys a 30-27 win.

Season? Texas has to win five of its last eight to qualify for a bowl. Gulp.

This won’t cost Charlie Strong his job as head coach — he might be safe for a third year even if this season continues to go haywire — but in some ways, you may be able to see the end from here. They’ve lit the Tower burnt orange so infrequently since Strong’s arrival, Wal-Mart supposedly is charging them half-price for orange light bulbs.

Just 17 games into his tenure, the tremendously likable, rock-solid-character head coach finds himself with an overall 7-10 record and nary a shred of positive momentum. He’s simply not getting it done. But then, he knows it.

Asked his level of concern, Strong said, “It’s a lot. We’re just trying to get this team going and get a win.”

A win would be nice for a change.

And now it’s hello, TCU and Oklahoma, the next two weeks, both away from Royal-Memorial Stadium, which may be a good thing since Texas has dropped two straight home games and sure didn’t benefit from any home cooking from some highly dubious officiating; the Longhorns were whistled a staggering 16 times for a devastating 128 yards. Heck, even Charlie got flagged 15 yards for unsportsmanlike conduct after questioning a holding penalty on a defensive tackle, much like most in the crowd of 87,073 did.

All those penalties smack of a lack of discipline. Strong cringed when that question was asked, and he rightfully said he’d like to take a look at a lot of them, like the penalties that called back two touchdowns and rubbed out a long interception return. “We’ve got to have a better-disciplined football team.”

Some of his players went even further.

“You can call holding on every play in football,” said guard Sedrick Flowers. “It’s 50-50.”

Unfortunately, they called most of them on Texas, including two on one drive when the line was flagged for three penalties overall.

Yes, the 1-3 Longhorns  shot themselves in the foot, the ankle, the shin, the calf and any other part of the anatomy you care to name. So slow down on that Texas is Back campaign. Cancel those Heard for Heisman coffee mugs. So what again is the worst bowl game out there?

“It obviously hurts a little worse when it’s the second time in a row,” safety Dylan Haines said. “We just couldn’t finish.”

Texas isn’t a lousy team. It’s not. But it is an average team with some of the worst luck imaginable, especially against a very good 24th-ranked Oklahoma State team with a terrific quarterback and a decent defense.

“If you look at this game and last week, we’re just inches, centimeters away from a win,” Flowers said. “But it hurts regardless.”

I refuse to believe any notion that the stage is too big for Strong. I’m convinced he’s a good coach, but the results are the results, and it doesn’t help his cause when special-teams blunders and a plethora of penalties doom him each week.

Strong’s even found a quarterback and an opportunistic defense, one that scored two touchdowns on Hassan Ridgeway’s fumble run-back and Holton Hill’s interception return. They even found brilliant ways to use backup quarterback Tyrone Swoopes in a short-yardage package that produced 35 yards and a touchdown on just three carries. Heck, even that maligned Longhorn defensive unit smothered Oklahoma State’s run.

Not that it mattered in the end.

Bohls: For turnaround to start, more than Longhorns’ luck has to turn