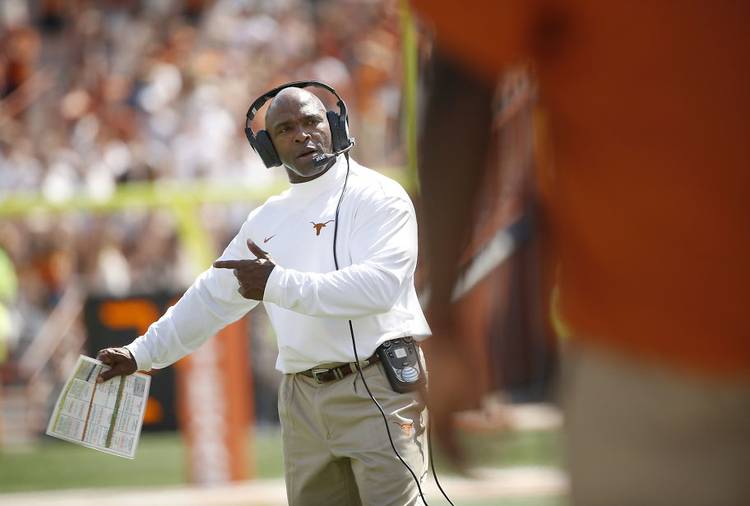 Texas head coach Charlie Strong on the sidelines during the first half against Oklahoma State at Darrell K. Royal Memorial Stadium in Austin. JAY JANNER/AMERICAN-STATESMAN

Charlie Strong was caught totally off guard when told his Texas football team is an 18 1/2-point underdog to TCU, although it could have been worse.

“Wow,” a wide-eyed Strong said when informed of the betting line that has since come down to 16 points. “I didn’t know it was that bad. Wow.”

Then as he walked off at the end of his Monday news conference, he shook his head and muttered, “That’s a big downer.”

With a 1-3 record this year and a 7-10 mark overall, Strong should be accustomed to downers by now. He usually fills a plate with chicken wings after Monday’s news conference, but this time he headed straight back to the office empty-handed. Maybe he’s lost his appetite, and who can blame him after crushing, back-to-back losses?

His players still have their head coach’s back. They held a players-only, hour-long meeting before Sunday’s practice in which center Taylor Doyle and other seniors spoke emotionally about correcting the direction the season is taking, starting against TCU.

“These guys came in our house and embarrassed us last year,” senior tailback Johnathan Gray said of the Frogs. “We’ve got to return the favor.”

Strong has had nothing but bad luck in what is approaching 1 1/2 seasons at Texas. His next good break may be his first one. It’d be a little bit of a reach to say the Longhorns deserved to beat Cal and Oklahoma State, but they had a chance to. I’m not sure the better team lost, but the unluckiest one certainly did.

TCU, meanwhile, gets the break of the year — a ricocheted pass in the back of the end zone that results in the winning touchdown against Texas Tech. That’s the kind of play that helps a team win a championship. Of course, Gary Patterson’s Horned Frogs have the nation’s fifth-ranked scoring offense and Heisman frontrunner Trevone Boykin as a backup plan, just in case he doesn’t get a fortuitous bounce. Usually they haven’t needed one.

When Strong was asked if he felt unlucky, he smiled and used some coach-speak to answer, “We have to create our own.”

Not that it’s all been bum luck for Strong. He had a pitiful offense last year and has been burdened with a pitiful defense for most of this season. And his special teams have been, well, pitiful at crunch time.

That said, he’s not had good fortune either. Consider that Strong:

As for creating luck, Strong’s yet to do that. Moreover, many of Strong’s decisions have set his team up for harmful consequences in which a bad bounce, or a bad penalty — or 16 of them — could ultimately cost Texas a victory.

There have been plenty of missteps, from the botched coin toss before the UCLA game to an ill-fated decision to kick a 52-yard field goal against Baylor, which was blocked and returned by the Bears for a touchdown.

No decision by Strong has been worse than a misguided evaluation of quarterbacks by him and play-caller Shawn Watson, which led to 13 starts for the underwhelming Tyrone Swoopes and kept the electric Jerrod Heard on the bench for all of last season and for all but six plays of the opener against Notre Dame. That wasn’t luck. It was poor judgment.

Some wonder about the hiring of Watson. Others are curious as to why Strong kept assistant Bruce Chambers initially, but Strong deserves credit for hiring Jeff Traylor and Jay Norvell and making a decisive change at offensive coordinator this season after just one disastrous week.

Despite such adversity, the players appear very positive as they moved forward.

“Our time is coming,” Gray said. “Our mindset is to keep fighting. You have to keep the faith.”

“I think this adds to our bite,” linebacker Peter Jinkens said.

The players remain firmly in Strong’s camp. They haven’t wavered. And Strong vows to fix this mess.

“It’s going to flip,” he promised. “You might as well get on board now. We’ve just got to keep working, and it’ll come some day.”

He’s talking about getting breaks, and he deserves one or two.

Bohls: Texas is emerging from its identity crisis