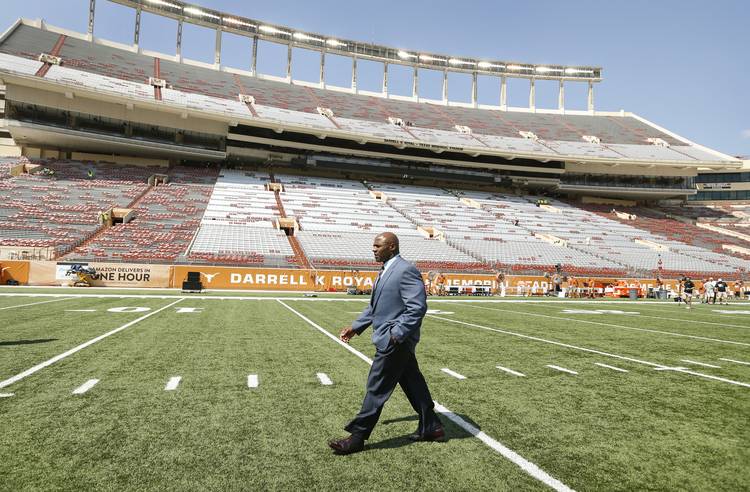 Who will save Charlie Strong?

The Texas coach has worked overtime to save his team’s psyche even as its fan base teeters on the edge of a 1-3 cliff with a scary trip to Fort Worth looming. Besides the abrupt firing of the athletic director, things have been pretty quiet in the locker room, on the practice field and, sad as it sounds, in the win column.

Strong has handled these hard times like a champ, but you know each loss is taking a little piece of his soul. Not one to easily hide his emotions — ask the line judge from the Oklahoma State game about that — Strong has held firm to the belief that Texas will emerge from this as a more tough-minded group.

Strong has had to be careful to protect his players, especially those who have figured prominently in Texas’ monumental late-game collapses.

Remember when Nick Rose’s esophagus tightened up on that potential game-tying extra point against Cal? Strong stayed  in the locker room and talked him off the ledge late into the night. Rose rebounded by making two field goals  (and all three of his extra points) against Oklahoma State. And Tyrone Swoopes, who was demoted to backup quarterback after the season-opening loss at Notre Dame, was probably crushed when he was dumped in favor of Jerrod Heard.

A large part of me believes Strong allowed former play-caller Shawn Watson to start Swoopes last season because he was afraid of what sitting him behind a freshman would do to the junior’s psyche. Plus he didn’t want to undermine his long-time assistant. Of course, the 38-3 loss to the Irish forced his hand.

His whiff in that area notwithstanding, Strong placed Swoopes into a short-yard specialist’s role against Oklahoma State, reminiscent of what new play-caller Jay Norvell did at Oklahoma with Blake “Belldozer” Bell, and not only re-energized Swoopes but also brought a new dimension to this offense and some needed energy to the locker room.

Strong’s latest pick-me-up is punter Michael Dickson, who dropped any chance of Texas winning last Saturday when he mishandled a snap in the final minute.

“Gotta get him out of therapy,” Strong said Monday when I asked about Dickson’s mental state.

But if this continues, a good argument can be made that Strong should spend a few hours on someone’s couch.

“That’s when you have to mature as a coach,” running back Johnathan Gray said. “This is what he signed up to do. I think coach Strong is a strong man. He knows what he has to get done and he’s very capable of doing it.”

Strong is a people person who deeply cares about his players outside the lines as much as he does on Saturday nights, but TLC has taken on a new meaning lately: These Losses Crush. While Texas has brutally figured out a way to make a 1-5 start a distinct possibility unless the Longhorns upset No. 4 TCU or No. 15 Oklahoma, Strong has to maneuver through the meat of this schedule for fans who have been mostly supportive through this rebound.

“He understands we’re that close and we have a lot talented players,” wideout Marcus Johnson said. “It’s one of those things where he loves what we’ve been doing these past two weeks. We can’t let it get like last year, when you get halfway through the season and it goes downhill.”

Strong has done a great job of holding this locker room together. But there has to come a time when his players will have finish a game for once and deliver a turnaround win.

It’s past time for the team to save the person who’s fighting a losing battle to save the season.

Eyes on Texas: Leaving Nike for Under Armour would be bold, unexpected choice

Bohls: Strong is losing games, but is he losing his players too?