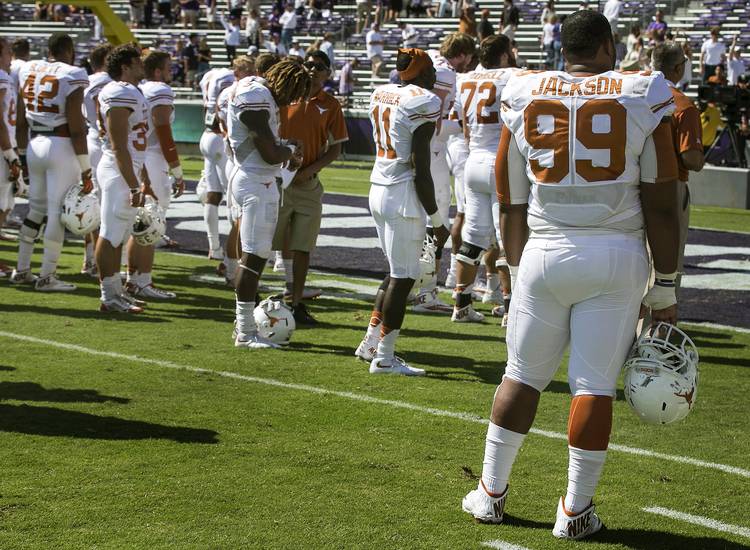 OCTOBER 3, 2015 - Texas Desmond Jackson (99) stands by himself as the team waits for the playing of the "Eyes of Texas" after being defeated by TCU 50-7 during an NCAA game held at Amon G Carter Stadium in Fort Worth, Tx., on Saturday, October 3, 2015. (RODOLFO GONZALEZ / AMERICAN-STATESMAN)

The Horns are scary bad.

If you thought Saturday was a long day for the Longhorns, try this on for size: Texas still hasn’t played Oklahoma, Texas Tech or  Baylor.

Shield your eyes, Texas fan. This is about to get worse. Much worse.

The Longhorns will not play in a bowl game this year, that is unless you expect them to go 5-2 the rest of the way with a schedule that includes the aforementioned three opponents and a road game against West Virginia, which beat Baylor in Morgantown last season.

This Cowtown Beatdown was thankfully scheduled for only four quarters, else the good folks at Amon G. Carter Stadium would have been running short on digit space.

By contrast, the Texas offense went three quarters and nearly 10 minutes without scoring as Jerrod Heard was stifled for a second straight week. The defense was scorched for 332 yards and five touchdowns by Heisman Trophy contender Trevone Boykin. The special teams? We should just rename it “teams” because the word “special” seems out of place.

For anyone who enjoys good competitive college football games, this was hard to watch. The Frogs’ defense resembled nothing like the group that gave up 52 points to Texas Tech last week. The Texas defense, on the other hand, was all too familiar.

Strong struggled to find the right answers. I wonder if they exist.

“There’s something about pride,” Strong said.  “You have to have pride in yourself. It’s a very competitive sport and this is a game of life. You have to know when things aren’t going right, that someone has to step up. That’s what we’re not getting right now.”

Strong has to take the brunt of the criticism because he was given large sums of cash to win games, even with this young bunch. The previous two games provided evidence that Texas has big-play potential to scare some people, but we saw no evidence of that against TCU, which has outscored the Horns 98-17 in their last two meetings.

“It was a quality homecoming win,” TCU athletic director Chris Del Conte told us after the game.

Texas fans who love football and hate boxing would have gladly accepted a referee’s stoppage after that 37-0 steam-rolling disguised as the first quarter.  Instead, the diehards were subjected to three hours and 30 minutes of Texas three-and-outs and TCU chest bumps.

And poor Chuck is starting to sound like a coach stuck on a bad sound loop. Same story, same post-game comments. He should just start cutting and pasting old quotes because the ones he gave us Saturday will work just fine after the Oklahoma game in Dallas, which figures to be another embarrassing loss.

The best illustration of Texas’ frustrations came from senior defensive tackle Tank Jackson, who didn’t even bother to exchange post-game handshakes with the Frogs at midfield. Instead, he lumbered down to the end zone for the obligatory playing of the “Eyes of Texas.” Jackson stood a couple of feet away from his teammates, clearly angry and detached. He looked lost.

So does the season.

The warm fuzzies Jerrod Heard created when he replaced Tyrone Swoopes as the starting quarterback are becoming a distant memory. The two losses by a combined four points to Cal and Oklahoma State had fans thinking about moral victories that could eventually become real victories.  Now in the aftermath of a seventh loss where a Texas team was held to 10 points or less in Strong’s 18 games at the helm … they’re just losses.

“I’m sorry,” Heard tweeted. At least he wanted until the game was over, unlike teammate Kris Boyd, who apparently was on Twitter at halftime.

Is there progress being made? Sure, with the young talent on the roster.  Is there a leadership problem? Absolutely, but that issue starts at the top of the food chain with the head coach. Is Charlie still engaged? He appears to be, but could drown in this gig before he even gets started.

Nor how to win.

It’s about to get worse.

Bohls: Strong is losing games, but is he losing his players too?

Bohls: Charlie Strong’s job is safe at Texas — for now