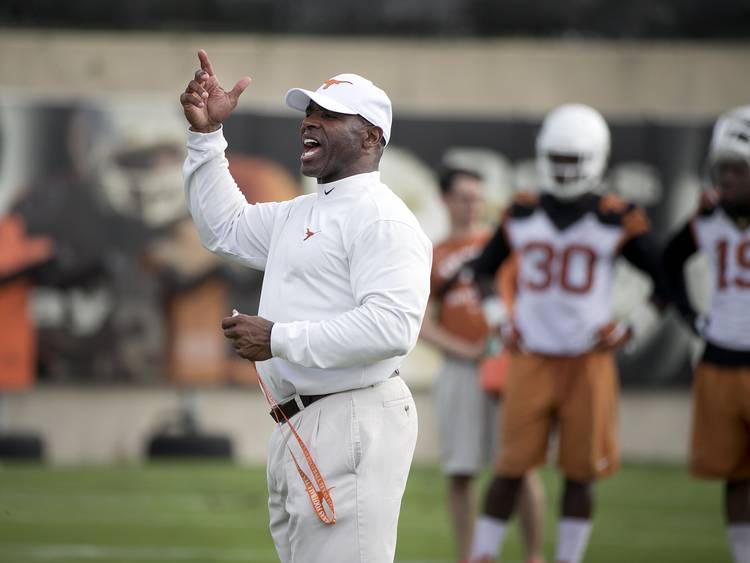 We have good news to report about the Longhorns.

Twitterwar has declared a ceasefire. At least for now.

Of course, Texas football has become the Middle East of college football, where warring factions wage conflict unendingly. As if things weren’t bad enough, players have begun turning on themselves. At least freshman cornerback Kris Boyd was only engaging an Aggies fan when he retweeted him during halftime of last Saturday’s 50-7 TCU disaster. Now the Longhorns are engaging one another on social media.

On Monday, starting safety Dylan Haines called out his younger teammates for a lack of preparation and a lack of passion in doing extra work, at which point underclassmen like defensive end Charles Omenihu and Armanti Foreman blasted Haines. It marks the second consecutive week that a Texas player has criticized a teammate, which is the only consistency this team has shown.

This has become borderline comical if it wasn’t so deadly serious for beleaguered Charlie Strong, who just can’t seem to gain any traction in Year Two.

Not two days after Boyd was chastised nationally for apparently thinking more about social media than his team’s performance, and not two days after Strong called a team meeting as soon as the team plane’s wheels touched down, and not one day after Strong had yet another meeting with his seniors, some of Boyd’s teammates were caught up in social media drama of their own, twitterizing one another. Just a matter of time until the Lege introduces a bill to stop Twitter on Twitter crime.

Strong has to be beside himself. And maybe wondering who is beside him. Or maybe not. Locally, he appears to be fine.

The new athletic director, Mike Perrin, has thrown his full support behind Strong. But then UT President Gregory L. Fenves fully supported Steve Patterson right up until he canned the athletic director before he was on the job even two years. Perrin couldn’t be reached for comment about Strong on Monday, but Fenves is still on board.

“As President Fenves indicated last month, he fully supports coach Strong,” said Gary Susswein, director of university media relations. “This has not changed at all.”

So is Charlie safe this year? Should he be? I totally believe Strong needs at least three seasons to have a fair shot at building a program here, but more non-competitive blowouts and internal discipline issues could undermine him to such an extent that keeping him might not be feasible. Coaches like Kansas’ Charlie Weis and Illinois’ Tim Beckman have been fired at midseason, and it’s doubtful any administrator has promised Strong he’ll be back for 2016, but most assume he will be.

He has a guaranteed contract for five years and would require a payout of $15.9 million, but is he guaranteed even a third season if, say, his team implodes and stumbles to a 3-9 finish? Where are those other two wins? Strong promised a better effort against Oklahoma on Saturday.

What would a 55-10 loss to OU mean? Would a home loss to dreadful Kansas be a final straw? Would a half-empty Royal-Memorial Stadium in the next home game against Kansas State suggest an already apathetic fan base? Remember, Perrin told us in the Amon G. Carter Stadium press box Saturday that, “I don’t like empty seats.” He may not have seen anything yet.

When one high-level Longhorn was asked if Strong was safe on Monday, he said, “As far as I know.”

Texas may rank 110th nationally in offense and 120th in defense, but leads the nation in team meetings and team drama.

How far until Texas football becomes a national punchline, the laughingstock of college football? Or are the Longhorns already there?

Just how does Strong survive? He deserves a fair shot to turn this around. When I asked how long it will take him to reverse the current direction of the program and whether he was concerned he might not even reach his third season, Strong  said, “Every day is a battle.”

Strong’s never in denial. He understands he’s accountable and has never shied away from that stance. But he also realizes a losing season represents a huge step backward and could deliver a real death blow to an already slow recruiting campaign.

Strong has taken necessary steps. He demoted his two co-offensive coordinators, but many questioned Shawn Watson’s credentials before he was hired. He installed Jerrod Heard as the quarterback one game into the season, but should have played him some last year. He announced the kicking job is up for grabs, but perhaps should have opened it up for competition two weeks ago after Nick Rose botched the extra point against Cal.

Strong should have suspended Boyd, at least for a quarter against OU. Not tweeting during halftimes apparently doesn’t qualify as a core value. Do the players fear Charlie any more? I know they support him, but where’s the tough-love coach who kicked 10 players off the team before the ink on his signed contract was dry?

And where’s the good news? What’s to spin positive? Not even Texas wants to see the headline, Coach Is Safe.

There’ll be more drama to come. Watch for it on Twitter.