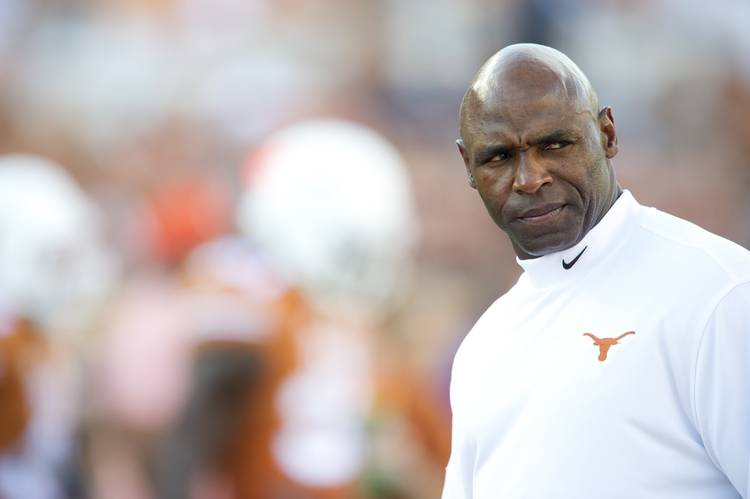 While I got ya, here are a couple of thoughts on Texas:

1. Not that votes of confidence are all that good, but Charlie Strong got another one Tuesday afternoon from his boss. “I continue to support coach Strong fully as a coach and a man. I think he can pull it together,” Perrin told me. Asked if Strong, who has a five-year contract, will definitely be back in 2016, Perrin said, “I assume so. Nobody’s said anything to the contrary.” Perrin, who has been on the job for three weeks, said he was “troubled by some of the stuff I’ve read about some (Twitter) discussions among the players” and that he was “very disappointed in the outcome” of the TCU game.

2. Tell me again why Strong didn’t suspend Kris Boyd for tweeting at halftime of the TCU game. The most fitting punishment would have been to take away his cellphone for a week. Yes, I’m old and yes, my lawn is sacred. But I find very lame the notions that this is the culture now, kids are different and kids live on their phones. The real culture at Texas now is losing, and that’s the culture that Strong has to break. He was well on his way to doing that last year with the dismissals of 10 players, but I wonder if that tough discipline has slacked off. … I’ve never seen less buzz for a Texas-Oklahoma game in more than 40 years. Strong was asked only three questions about the Sooners on Monday.

3. Former Texas outfielder Drew Stubbs will be a reserve for the Texas Rangers as they face Toronto in the American League playoffs. “It’s a very exciting time,” Stubbs texted from Toronto. “It’s a bonus for me to be playing close to home and getting to experience (the playoffs) again. I feel good about us matching up with anyone. We are well-rounded with lots of post-season experience.” Stubbs hit only .179 in eight playoff games with the Reds but has great speed and a terrific glove.

4. Augie Garrido openly but good-naturedly bristled when asked about high expectations for this year’s Texas baseball team: “I hate that word. It’s right next to ‘denial’ in the dictionary. Expectations create a false reality.” His team was mediocre much of last year. Outstanding returning pitching should bring a high preseason ranking, but the coach said, “This year you either perform or you don’t play. No one has a job. No one is the shortstop. No one is the second baseman.” He does plan to return to his philosophy of manufacturing runs. “Sorry, all you bunt haters,” he said.

5. I still don’t understand why D’Onta Foreman isn’t already Texas’ featured back. He clearly has passed Johnathan Gray, whom I could see as the third-down back because he has really good hands as a check-down receiver. … And where were all the crossing routes over the middle of the field and quick hits to the tight end against TCU? Did Jay Norvell not watch the tape of the Oklahoma State game?

Here’s a link to my full Nine Things and One Crazy Prediction column.