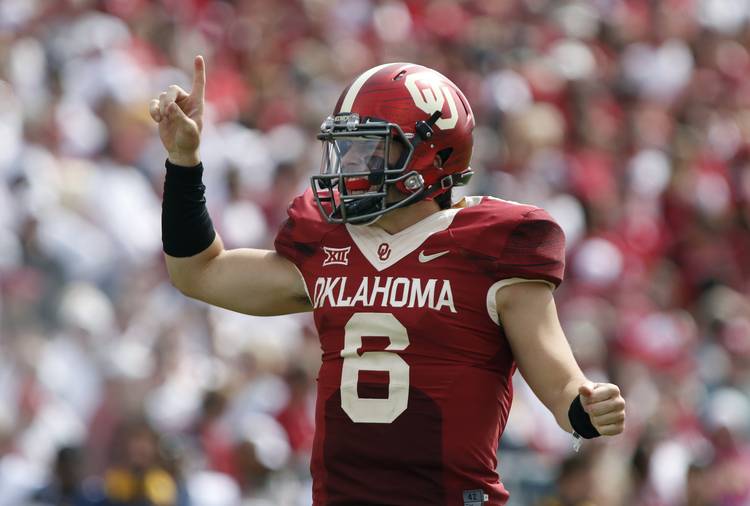 The platitudes about Baker Mayfield come in as big a rush as the free-wheeling Oklahoma offense.

“He’s just got that look in his eye,” one Mayfield fan said. “He’s got that fire.”

And those are heart-felt testimonials from Longhorns.

Texas pitcher Connor Mayes, a former teammate of Mayfield’s on the Lake Travis baseball team, was the one who saw the constant fire burning within Mayfield. And Lake Travis ex Taylor Doyle, the center on the Texas football team, can appreciate how much Mayfield loves the big stage, none of them bigger than Saturday’s showdown between 10th-ranked OU and reeling Texas in the Cotton Bowl.

The Oklahoma side likes him, too.

Well enough that this fiery, play-making quarterback has the Sooners back in the national championship hunt and has himself in the midst of Heisman conversations. He may be the only walk-on quarterback in college football history to show up on two separate campuses without a scholarship and become the starter in his first year of eligibility at both.

But he’s much more than an answer to Sooners trivia. He’s passed for at least three touchdowns and run for one in all four of OU’s victories in a perfect season thus far. He’s completing 65 percent of his throws for 13 touchdowns and has run for four. His college and high school record as a starter is a glittery 34-4.

So can OU win its first national title since 2000?

“I think we are capable,” Mayfield said in a phone interview. “We have the talent that’s been missing for a while. If we can put the pieces together …”

Not bad for an undersized (listed at 6-1) high school quarterback who went unrecruited by the larger schools and was so frustrated by the lack of attention that if Washington State’s campus “wasn’t over a thousand miles away, I’d have been there in a heartbeat,” he said.

OU wasn’t the least bit interested in Mayfield, even though he’d won 25 games and a Class 4A state championship at Lake Travis on the outskirts of Austin and even though he grew up idolizing the Sooners to such an extent that he wore a Quentin Griffin jersey to Owen Field and says a high five he got as a youngster from an OU running back on the sideline “just about made my life.”

But Bob Stoops made no offer.

Neither did TCU’s Gary Patterson, even though Mayfield said the school told him it would extend an offer and “ended up offering a 6-3 kid who doesn’t even play quarterback there any more.” Temple’s Zach Allen was moved to receiver.

Texas Tech didn’t offer, either. But he chose to walk on at Lubbock partly because Red Raiders coach Kliff Kingsbury recruiting him for Houston years before and former Lake Travis ex Michael Brewer offered a “familiar face” at Tech and endorsed the school. That would turn out badly after one newsworthy year when he and Kingsbury got crossways over the timing of a scholarship offer.

Of course, Tech’s just one on a long list of scores that Mayfield wants to settle. The Red Raiders overlooked him, but who didn’t?

“Yeah, I feel I always have a chip on my shoulder,” he said. “This just adds to it. That I was overlooked, that I grew up in Texas’ backyard and they didn’t even give me a glance, it’s upsetting. It’s frustrating. I use it as fuel.”

“If I wanted to walk on, I could have,” Mayfield said. “But it didn’t sound like they were too welcoming about it. So it was not an option for me.”

He’d been to a few games at Royal-Memorial Stadium during his high school years. He even won the starting quarterback job there in a game against Westlake his junior year when the starter got hurt and he was inserted, never to leave. He also took in a Rice game there to see former Cavaliers buddy Garrett Gilbert. Did he root for Texas?

“I rooted for Garrett,” he said.

And Mayes roots for Mayfield. Although they’re on opposite sides now — and in different sports since Mayes is a talented sophomore right-hander on the Texas baseball team — Mayes remains close to his friend. Their moms, both named Gina, ran the Lake Travis baseball booster club together. Heck, Mayes’ mother even wears OU’s colors to pull for Mayfield and wears “maroon for him or nasty red or whatever their color is. I root for Baker, not for OU, let’s get that straight.”

Another thing to set the record straight. Mack Brown’s Texas staff blew it by not begging Mayfield to throw passes in a Longhorns uniform. But then, overlooking spectacularly talented quarterbacks has risen to an art form on the Forty Acres.

The same case could be made for Texas Tech and TCU, but they’re doing just fine with the guys running their spread attacks. Texas, meanwhile, must contend first-hand with Mayfield, whom Texas defensive coordinator Vance Bedford said “has that Brett Favre mentality.”

Working with the scout team for a year in Norman while he re-established his eligibility, thanks to a total lack of common sense by NCAA rules, was “pretty humbling.” But when he got his chance to shine, he beat out incumbent Trevor Knight who has on his résumé an upset of Alabama in the Sugar Bowl, and Mayfield hasn’t missed a beat. He hasn’t missed a receiver very often, either.

Curiously enough, if Mayfield had it to do over again, he wouldn’t change a thing. Not the lack of scholarships after wowing everyone at Lake Travis. Not his beef with Kingsbury over a scholarship after he’d proven himself as a freshman. Not after throwing to Dorial Green-Beckham, now a Tennessee Titan, on OU’s scout team for a year. Not any thing.

“Not in a million years did I expect to be playing for OU,” he said. “It’s been a wild journey to be sure. I’d do it the same way. It made me grow up pretty quick and made me mature.”

Now Texas may feel the brunt of his anger. Mayfield’s been to the Cotton Bowl just once, when he stood on the OU sidelines and watched his teammates beat the Longhorns last October. It’s his chance Saturday.

“I don’t know what’s wrong with me, but I don’t get nervous,” he said. “Sad for Texas? Hey, last year we went 8-5, so I can’t really comment on somebody else. On paper, they’re young. But two years ago, they came in and spanked us. It’s the University of Texas. They always get good recruits.”

And occasionally let a few slip right through their fingers.

Eyes on Texas: Longhorns should ignore the stats, focus on winning