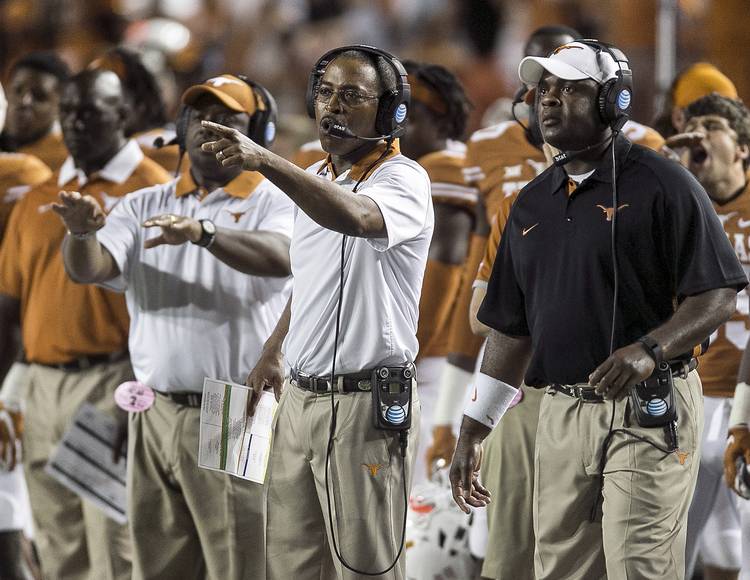 Statistics can be sifted, sliced, diced or dismissed altogether. But they always tell a story.

Through five games, these numbers tell a grim tale. The Texas defense is probably going to finish as the worst unit in school history, statistically speaking.

Barring a dramatic turnaround, the Longhorns are on pace to allow more than 6,000 yards for the first time ever. The current UT record is 5,294 yards allowed in 2013.

“We’re on pace for that, but at the end of the day, you know what you have to talk about? Let’s go find a way to win,” Bedford said. “If I sit back and worry about a record, whether that’s good or bad, that’s a mistake. We need to be talking about how can we win a ballgame.”

And he’s right. This defense can give up a thousand yards, but if Texas can win on the scoreboard, it doesn’t matter. Well, OK, maybe a little to the diehards.

Every week, Bedford talks about how much youth is on the field and how his players need to find confidence. Keeping the youngsters’ confidence up could be the staff’s biggest struggle going forward.

The coaches are always going to have a positive outlook. But what about freshman Malik Jefferson? Or how about cornerbacks Kris Boyd, Holton Hill and Davante Davis?

A sign in the locker room says it all: PRIDE. Players respond in difficult environments.

Saturday represents a real gut-check moment for the Longhorns and the defense. Even Charlie Strong’s biggest defenders are running out of ammunition, and national pundits are wondering if this is going to work long term.

Strong totally side-stepped a question about Bedford’s status as the defensive coordinator on Monday. The head coach has already rearranged the offensive staff. Changing the defensive staff at this point sends a terrible signal.

It sounds strange, but this is a perfect time for a rivalry game to grab everyone’s focus.

Mayfield, from Lake Travis, wasn’t recruited by Texas. The Horns wouldn’t even give him a look-see, so he took off for Texas Tech and eventually transferred to OU. Texas didn’t recruit Hendrickson running back Samaje Perine, either. Perine needed only 326 carries to reach 2,000 rushing yards for his Sooners career, the fastest total of anyone under Stoops.

Stoops will run it up, if given the chance. The Sooners scored at least 55 points in this game four times since he took over prior to the 1999 season. That never happened once in the previous 93 games.

The UT athletic department has not sold its entire ticket allotment. There’s a strong chance the 5,000 or so tickets sold in the last three weeks were gobbled up by OU fans. Crimson and cream might be spread throughout the north end zone.

Things are so bad at the moment, even Bevo is sick. Word came down Wednesday that Bevo XIV, the team’s mascot since 2004, will not make the trip due what’s being called a “life-threatening condition.”

But none of it matters if Texas can get a win. Walking down the tunnel alone should give these players goosebumps, not to mention motivation.

“On one side, you see that strange little horse with that lil’ buggy they have,” Bedford said. “Then you see the Longhorns with the burnt orange, it’s … wow. It’s hard to explain.”