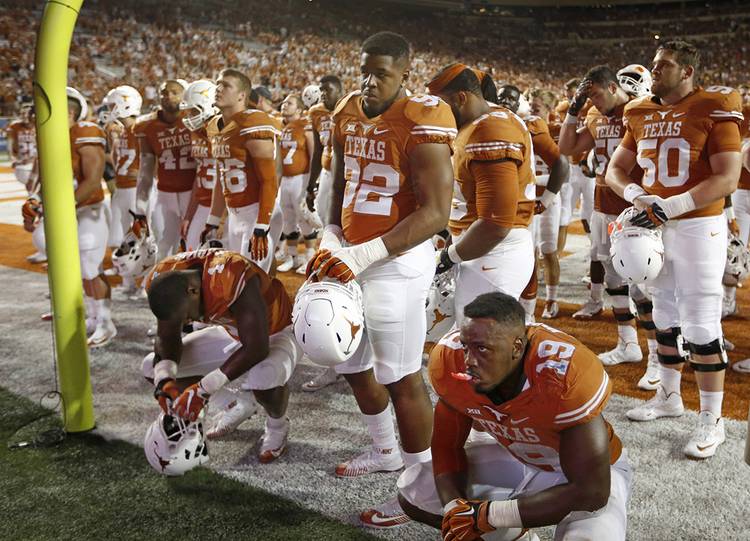 Have they already quit on Chuck Strong?

If so, then the Cowtown Beatdown will have nothing on what goes down in Dallas.

The Texas Longhorns decided not to fight against TCU, playing like a punch-drunk group of rag tags  that let the close losses to Cal and Oklahoma State kill their fighting spirit.

“We waited for TCU to mess up,” quarterback Jerrod Heard told reporters Tuesday night. “And then we were going to react, but we need to be the team that puts them on their heels and attack.”

If I’m Strong, I pull out all the stops. I show the team the final round from Rocky II, the scene from Hoosiers when Gene Hackman questions his team’s heart, and the 2013 Texas-Oklahoma game where the fearless Case McCoy delivered a victory in what turned out to be Mack Brown’s final Red River Showdown with Bobby Stoops.

The Longhorns can’t pull a no-show with an offense that was stuck in no-go in Fort Worth and Vance Bedford’s defense which should have stayed on the team bus.

The time has come to get it done by any means necessary.  If it means sitting the starting kicker and punter in favor of unprovens, then do it. If it means making D’Onta Foreman the featured back instead of the more experienced Johnathan Gray, then do it.

Most important, the Horns have to show they still have the guts, the desperation, and the want-to to go in there and accomplish what seems at this minute to be the impossible.

“Going into it, we’ve got to get the W,” Strong said. “And with that, it definitely changes the way you feel about yourself. And that’s why we need more confidence.”

If Texas has any fight left, we will see it against Oklahoma.

Something tells me it won’t take long to determine if this group is there to win or just to take in the State Fair, get its tail spanked and grab a Fletcher’s Corny Dog on its way to the exit with a 1-5 record.

Watching the national media discuss Texas and Charlie Strong in such a dismissive manner over the last couple of weeks gives me the feeling that all is lost in our fair city because Strong hasn’t come up with the right answers to halt this storm. President Gregory L. Fenves is being asked about his coach’s job security just three weeks after hiring an interim athletic director.

And somewhere Mack Brown is thinking, “They really want to blame this mess on me?”

Strong is just 18 games into his tenure and his seat is getting warmer by the minute. Some fans and donors who were preaching patience just a few weeks ago are now wondering if he is the right man for the job.  The product he places on the field — and the manner in which it competes against a ranked team — will be almost as important as the outcome because the real value of a head coach is how he handles his group during the toughest of times.  Don’t get this twisted about Strong. He contract is guaranteed but he is a man fighting for his coaching life.

OK, we knew there would be growing pains. When you play over a dozen freshmen in a game, the potential for blowout losses is great. Chuck has already told by  his depth chart decisions that his best players are his young players.  Add to that, when the young ones aren’t on the same page with certain older players, it can blow up.

That happened here. This team has found a way to go from a fan base’s beacon of hope to a dumpster fire in the span of two weeks.

It all comes down to how badly they want to avoid embarrassment, if they do at all.  When is enough enough?  After a while, shouldn’t someone in that locker room stand up and say, “To hell with this. I’m not going out like that. Let’s go hit them in the mouth. What do we have to lose?”

In the mob classic The Untouchables,  Sean Connery’s character asked a great questions of Kevin Costner’s Eliot Ness after their accountant buddy was gunned down by Al Capone’s henchmen.

“My question is, are we done?”

With Bevo taking a sick day, will the Horns just lie down and allow the Sooner Schooner to treat them like Cotton Bowl roadkill?

Eyes on Texas: Longhorns should ignore the stats, focus on winning

Bohls: Huge win, but much work for Strong before he sleeps easily